This past summer, an illustration generated by artificial intelligence took home the top prize at the Colorado State Fair’s annual art competition.

An internet uproar ensued, as social media users lamented a future in which artists would be supplanted by algorithms. “We’re watching the death of artistry unfold right before our eyes,” read one Twitter post. It racked up six thousand likes.

All the fatalistic hand-wringing was more than a little funny—and not just because a meager $750 prize prompted it. It was amusing because a predictable cycle was at play: As long as humankind has made technological advancements, there have been those who perceive them as threats to their humanity.

“To me, it’s a bit like people decrying the camera stealing your soul when you take a picture,” said Ian Cheng.

Cheng, too, is an A.I. artist, though his work doesn’t resemble anything like the fantastical scene that took home the ribbon in Colorado. Until recently, Cheng’s works often looked like glitched-out video games that used A.I. to play themselves. He calls them simulations.

And he won’t be competing in state fairs anytime soon either. Over the last five years, he has appeared in eight biennials and triennials, a feat that casts him among a small group of globe-trotting, zeitgeist-defining stars on that circuit.

He’s currently showing one of his newest creations at the Halle Am Berghain in Berlin, an artwork that is about evolution and also signals an important development in his own practice. , which was co-commissioned by the Berlin nonprofit Light Art Space, is a 45-minute animated film that counts as the first installment in the artist’s planned episodic anime series Life After Bob.

It’s not hard to see why curators are drawn to his work—it’s brainy enough for tech intellectuals, yet accessible to anyone who’s ever fired up Fortnite. He toes that line in conversation too, deploying references to rap stars, theoreticians, and with the zeal of someone who clearly loves to learn.

“I’m always deeply impressed by how wide-ranging his mind thinks,” said curator Christopher Lew, a friend of Cheng’s. “On one side, he is trained in computer science, he can code, he knows how to speak fluently with programmers. But at the same time, he formerly studied cognitive science and he’s working on deeply conceptually-oriented work.”

Set decades into the future, Cheng’s new filmfollows a 10-year-old girl named Chalice whose neural engineer father has implanted in her an experimental A.I. of his own design. While Chalice is all id and imagination, a young kid feeling her way through the world, the A.I., named BOB, is a kind of super-ego—a subconscious voice that guides the child via cool, prescriptive logic.

“What does BOB do for you?” Chalice’s father, the paranoid workaholic Dr. Wong, asks her early on in the film.

“Help me arrive at my destiny,” the child says, laying out both the logic and stakes of the sci-fi world Cheng has invited us into.

“What happens if something gets in the way?”

What plays out in the rest of the film is a tug-of-war between Chalice and BOB. Both are Dr. Wong’s children, in a sense; they just happen to live in the same body. But as BOB begins to take over more and more, Dr. Wong finds it’s the A.I. entity, not his daughter, that he prefers.

Ian Cheng, Life After BOB: The Chalice Study (2021), detail. Courtesy of the artist.

A largely straightforward narrative, marks a departure for Cheng. Whereas the artist’s previous artworks were built from A.I., his new film is, ostensibly, about AI.

In his “Emissaries” (2015-2017) trilogy of episodic live simulations, a character coded to play out a story arc was pitted against the chaos of a randomly generated digital world around it. In BOB (Bag Of Beliefs) (2018-2019), a chimeric serpent was the star. As the simulation evolved in various galleries and museums, so did the creature, “learning” through stimuli provided by viewers through an app. (The artist conceived of the former BOB as a beta version of the one implanted in Chalice.)

“Cheng’s gesture,” wrote Artnet News critic Ben Davis of the latter work in 2019, was “about teasing the limits of the relation, creating something that stands for both the fascination and the repulsion of this particular technological moment.”

The artist is no doubt after something similar in . With the film, Cheng offers no conclusions about the murky ethics of A.I. (which is a minor feat unto itself given the technology’s centrality to any number of fiery political debates—about art, medical diagnoses, state surveillance, astronomical observation, and so on). 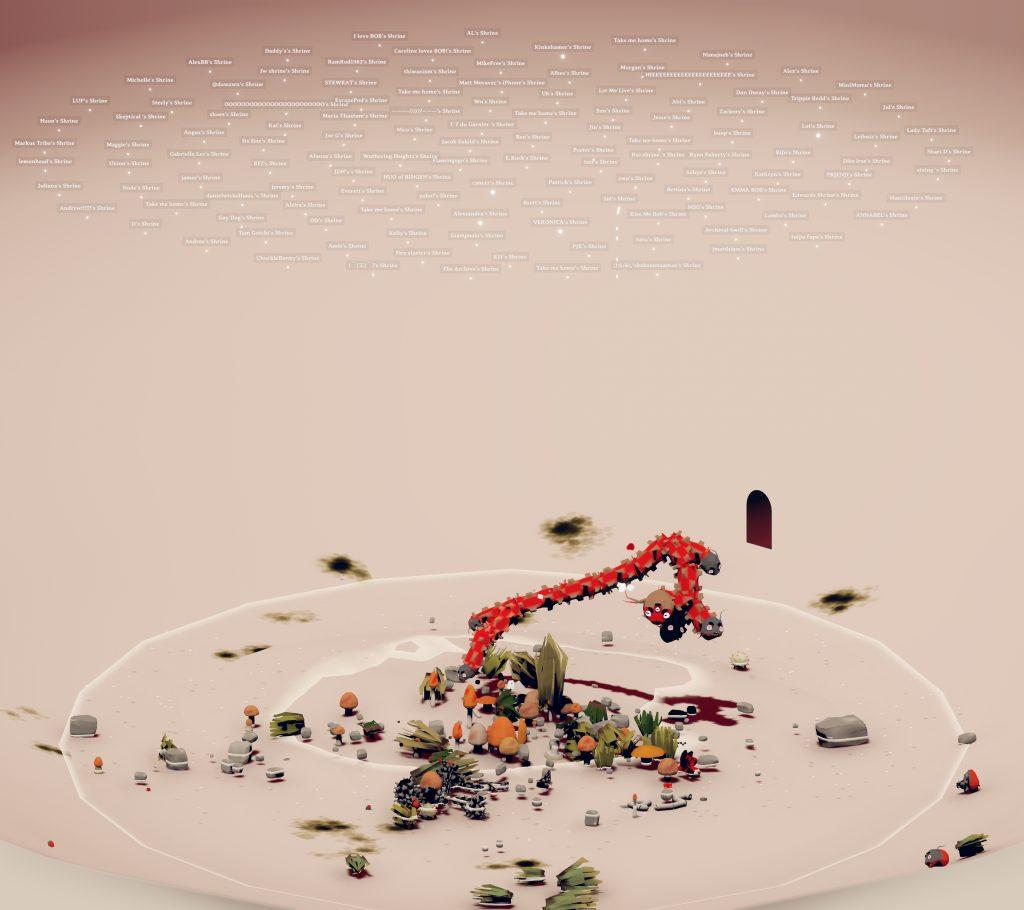 “I think if you can make a political statement through your art,” Cheng said, “well then you’re kind of a bad artist. Because to be able to make that statement up front means you already know the answer and that’s the domain of black and white.”

is equivocal, and quite generously so. The film’s sci-fi scaffolding makes for easy metaphoric readings: you could argue that it is about the experience of growing up, say, or the imperious threat of technocracy; you could even claim that it’s about the unknowability of God.

Without question, the film is also about parenthood. “It’s totally a father-daughter story,” said Cheng, who welcomed his second child with artist Rachel Rose in early 2021. He began writing the script for two days after his first was born, in 2019, and the story developed from a thought exercise he played in his head.

“I was fucking anxious as a dad,” Cheng recalled of his daughter’s first days. On the artist’s mind was what he called a “selfish question:”

From that came a kind of thought exercise: “‘What’s the worst dad I can be?’” he said. “The dumb answer I came up with was, ‘I’ll be the dad who conflates his daughter and his work.’” 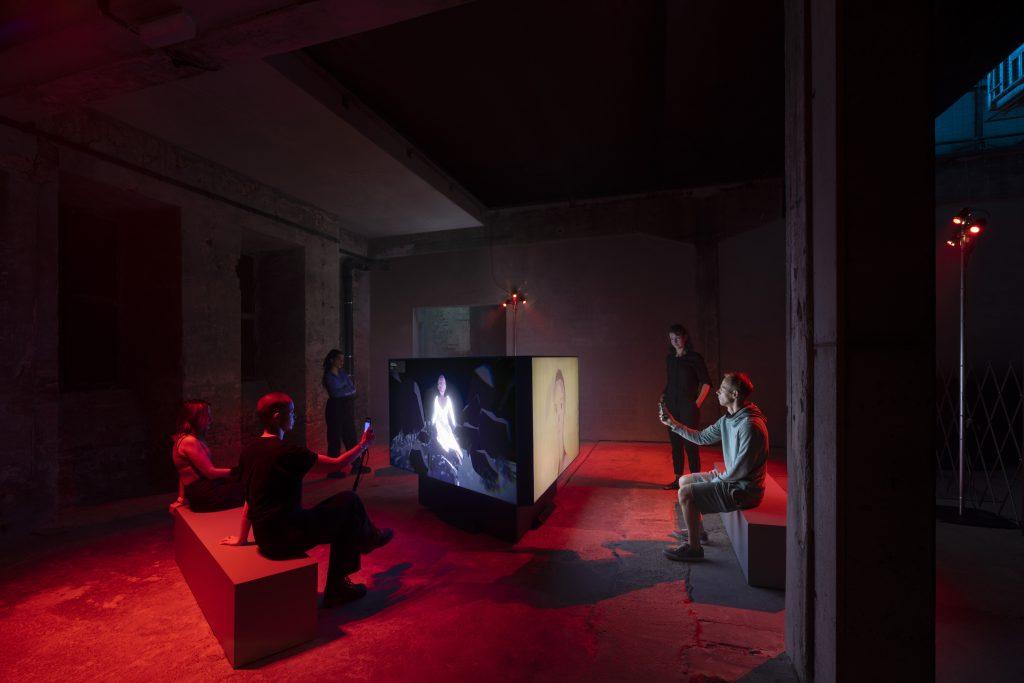 “He has found this amazing, elegant way to talk about both raising a child and programming at the same time,” said Lew, who is also a parent. “That idea of what we imprint upon our children is a very real thing. You can feel the anxieties of Chalice’s father there in the piece.”

Earlier this year, Lew, who is now the chief artistic director of the digital art platform Outland, commissioned Cheng to create a new NFT project. What the artist came up with was “3FACE,” a program that generates abstract portraits of users based on data mined from their cryptocurrency wallets.

As with older works, Cheng is interested in the little lost-in-translation moments that occur when empirical data is squeezed from the subjective human experience. Behind each portrait that “3FACE” spits out are three core forces: posture, nurture, and nature.

Another NFT project accompanies Cheng’s new exhibition in Berlin. At the end of the show, visitors are given a free digital artwork created from personal information they were asked to give upon entry.

Animating these recent NFT projects and is another question that the artist has been mulling over for some time now: “Can we make art now that adapts itself to the viewer?”

“My hope,” said Cheng, “is that, in seeing Life After BOB and going through a show like this, people become more alive to their own potential. If I have a moral-political message to my work, it’s that.”