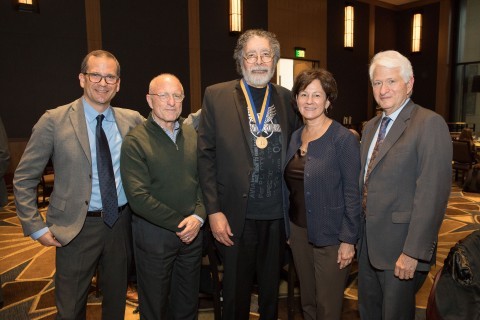 Since its founding in 1969, the UCLA Chicano Studies Research Center
(CSRC) has played a pivotal role in the development of scholarly research
on the U.S. Chicano-Latino population. Our research mission is supported by
five distinct components: a library with special collections archive, an academic press, collaborative research projects, public and academic programs, and community-based partnerships.

The UCLA Chicano Studies Research Center has received $1.45 million in a bequest gift to support research and scholarship related to the art and life of Raphael Montañez Ortiz, a Puerto Rican American pioneer of the 1960s destructive art movement, founder of the first Latino museum in the United States and recipient of the UCLA Medal in 2017. 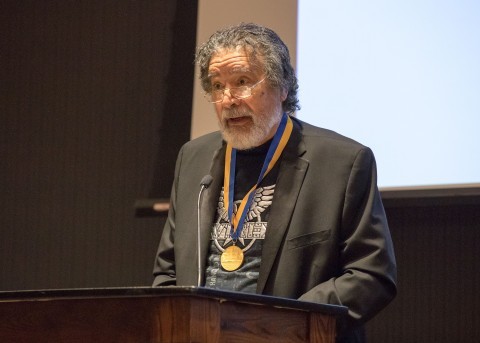 The gift comes as a bequest from Ortiz’s estate. The Raphael Montañez Ortiz Endowed Fund will support research, publications, fellowships, public events, exhibits, and lectures related to the artist’s extensive papers, audiovisual materials, and ephemera. Ortiz donated those to the center’s library in 2015. The latest gift marks the largest contribution to the CSRC in its 52-year history.

“The CSRC is proud to archive materials related to Dr. Ortiz’s extraordinary career as an artist, writer, and teacher,” said Chon Noriega, director of the Chicano Studies Research Center and a distinguished professor of film, television, and digital media in the UCLA School of Theater, Film, and Television. “With his bequest gift, Dr. Ortiz ensures ongoing support for research related to his collection that advances our understanding of the long-term contributions of Latinos in U.S. and world art.”

Active in the arts and education for nearly 65 years, Ortiz gained recognition in the 1960s as one of the leading figures of the destructive movement. Perhaps best known for his piano destruction concerts, “Archaeological Finds,” and recycled film and video works, Ortiz’s work is included in permanent collections at major museums, including the Museum of Modern Art, the Whitney Museum of American Art, the Tate art museum, the Smithsonian American Art Museum, and the Hirshhorn Museum.

Noriega, who was recently named a Guggenheim Fellow, will use the collection during his fellowship year to work on a book about Ortiz, which the center will publish as part of its “A Ver: Revisioning Art History” book series.

Born in 1934, Ortiz grew up on the Lower East Side of Manhattan with a commitment to social and cultural equity. In the late 1950s, he pursued formal art training at Pratt Institute. In the 1960s, he became one of the few non-white voices recognized in contemporary art who was grappling with the effects of global conflict, rampant consumerism, and the threat of nuclear war. His conceptual practice drew from Latino, Indigenous, and non-Western cultures to merge ritual with archaeology to reconcile rational thought with the brain’s primal impulses. 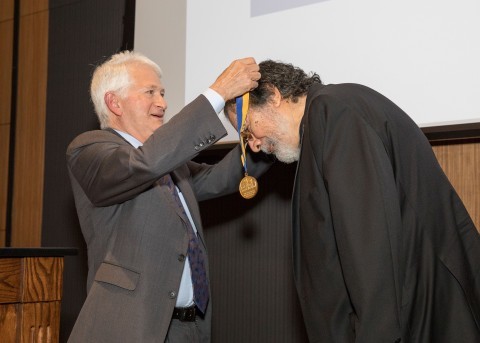 Ortiz served in the U.S. Air Force during the Korean War but was particularly interested in being a catalyst for change at home. In the late 1960s, he helped organize Puerto Rican artists as part of the Art Workers’ Coalition protesting the exclusionary practices of major museums in New York City. As a way of countering racial inequality in the arts, and committed to the idea that art is fundamental to human experience, in 1969 Ortiz founded the first Latino art museum in the United States, El Museo del Barrio East Harlem, New York. Ortiz’s mission for the still-active museum was to represent an underserved Latino community and to do so as a contribution to world art and culture. MacKenzie Scott recently awarded El Museo an $8 million grant as one of more than 60 arts and cultural institutions “from culturally rich regions and identity groups that donors often overlook.”

Ortiz remains active as an artist and teacher and is the subject of a 2020 book, “Raphael Montañez Ortiz,” published by El Museo del Barrio, which is also planning a retrospective for April 2022.

“Dr. Ortiz’s ongoing work exemplifies the diversity and global reach of American culture and art,” said David Yoo, vice provost of the UCLA Institute of American Cultures, which houses the Chicano Studies Research Center and UCLA’s three other ethnic studies research centers. “We thank him for entrusting the CSRC to serve as the steward of his papers and critical legacy.”

Throughout its 52-year history, the center has advanced diversity in the arts through scholarship, museum exhibitions, archival collections, public programs, community partnerships, professional development, and policy-related research and advocacy. One of the United States’ oldest ethnic studies centers, the Chicano Studies Research Center is dedicated to the study of people of Mexican descent, and it’s home to the world’s largest library and archive of materials about Chicana and Chicano and Latina and Latino populations.

Among the most important arts-related initiatives undertaken by the Chicano Studies Research Center: