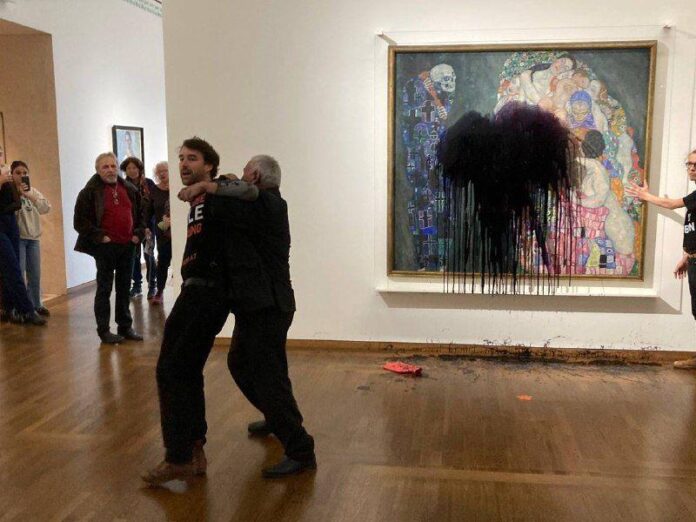 Two climate activists poured oil over a Gustav Klimt painting in Vienna today. The petroleum-like substance was emptied on to Death and Life (1908) at the Leopold Museum from what appears to be a hot water bottle; the protesters then attempted to glue themselves to the wall. In a video posted on Twitter, a security guard can be seen dragging one of the activists away before they can attach themselves.

The activists are part of the group Letzte Generation, who last month in Germany targeted the world’s most expensive Monet: Haystacks (1890), at the Museum Barberini, in Potsdam.

Their actions are part of a growing climate protest movement in Europe involving demonstrations staged at museums and involving prized works of art. Demands from similar groups such as Just Stop Oil in the United Kingdom and the Italian group Ultima Generazione have included an end to new oil and gas projects. Likewise, the demonstrators at the Leopold could be heard calling for a stop to fossil fuel projects. “New oil and gas wells are a death sentence for humanity,” they wrote on Twitter. On the Austrian oil, gas and petrochemical company OMV’s website it says: “OMV has been a proud partner of the Leopold Museum for many years.”

In a statement, the museum said that while “the concerns of the climate activists” are “valid”, “attacking artworks is definitely the wrong direction to pursue”, claiming that “museums are preserving institutions and, in this sense, a prime example of sustainability”. They add that “after an initial assessment by our restoration team, we are fortunate to be able to announce that there was no damage to either the picture or the original Hoffman frame”.

Last week, in a statement signed by the directors of the Musée du Louvre, New York’s Museum of Modern Art and 92 other museum directors in the US and Europe, officials spoke out against the growing demonstrations, stating that activists were “severely underestimating the fragility” of the “irreplaceable” works of art.

Death and Life depicts a skeletal figure representing death at one end and a group on young people laying on a flower bed at the other. In the video, one activist can be heard saying: “Today, it is precisely this question and this decision that is at stake. Do we choose life—for the survival of humanity—or do we choose to continue to destroy our world with fossil fuels. That is the decision we have to make now”.

What I Buy and Why: Collector Dede Wilsey on Why She Prefers to Hang Her Kandinsky Sideways and How She Helps Museums Acquire Art

Top 7 health benefits of lavender for everyone