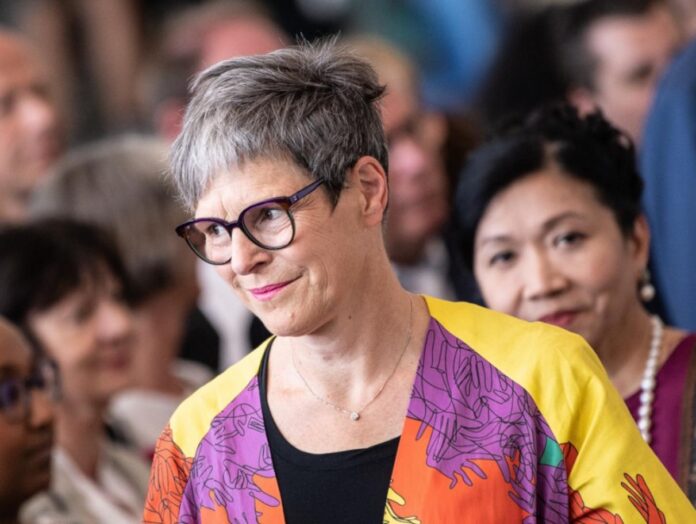 The director general of the prestigious Documenta exhibition, which opened its 15th edition in Kassel last month (until 15 September), has resigned over an ongoing antisemtism row.

The exhibition’s supervisory board has released a statement expressing “profound dismay” at the presentation of works which contain “antisemitic content”. As a result, Sabine Schormann’s contract as the head of the quinquennial has been terminated, a decision that was “mutual”, the statement reads. The decision was made “at short notice” and so Schormann will remain in office until an interim director is found, it adds.

Allegations of antisemitism have plagued Documenta 15 since January, when German media and local politicans began taking issue with the pro-Palestine and pro-Boycott, Divestement and Sanctions stances of a number of participants in exhibition, which was curated by the Indonesian collective ruangrupa.

However, the situation escalated rapidly following the presentation of the towering banner Peopleʼs Justice (2002) by the Indonesian collective Taring Padi, which featured imagery that has been widely interpreted as antisemitic. The offending work contains a portrayal of a pig wearing a helmet blazoned “Mossad”—the Israeli intelligence agency—as well as a man depicted with sidelocks, often associated with Orthodox Jews, fangs and bloodshot eyes, and wearing a black hat with SS insignia.

Within a week of Documenta 15 opening, the work was covered with a black cloth and then removed entirely. Schormann, who had initially defended the artists, released a statement distancing herself and Documenta from the work. Statements were also issued by Taring Padi and ruangrupa admitting fault for the work’s placement and apologising to those it offended.

But the damage to Documenta had already been done. “A lot of trust has unfortunately been lost,” the statement says. “The Supervisory Board considers it essential that everything is done to regain this trust.”

The decision for Schormann to step down was welcomed by Germany’s culture minister Claudia Roth, who last month announced that Documenta would come under greater control of the federal government in light of the antisemtism row. “It is right and necessary that we can now work through how antisemitic imagery could have been exhibited and draw the necessary conclusions for the art exhibition,” Roth told Frankfurter Rundschau last week.

Schormann has served in her role as director general of Documenta since 2018. Prior to that she was the director of Hanover-based institutions the Lower Saxony Sparkassen foundation and the VGH-foundation. She was brought in to replace Annette Kulenkampff, who herself was ousted following controversy over massive overspending during Documenta 14. That edition of the quinquennial, which was curated by Adam Szymczyk and took place in both Kassel and Athens, ran €5.4m over budget.

Schormann’s resignation comes after a number of high profile figures involved in Documenta 15 have distanced themselves from the show in light of the antisemitism row. Earlier this month, the German artist Hito Steyerl pulled her work from the show over a “refusal to facilitate a sustained and structurally anchored inclusive debate around the exhibition”. On the same day, Meron Mendel, the head of the Anne Frank Educational Institute in Frankfurt, resigned from his advisory role.

Documenta’s supervisory board has promised a full investigation of the controversy, pledging to prevent other “antisemitic incidents”