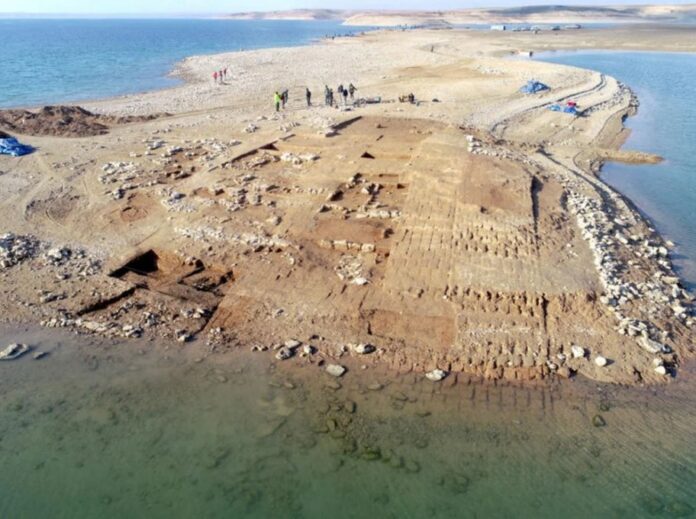 Iraq is battling its worst drought in decades. Lack of rainfall and poor resource management has left communities that depend on the Tigris and Euphrates rivers devoid of the water they need to survive. So authorities drained part of the Mosul Dam reservoirin the country’s Kurdistan region this January to keep crops from drying out.

As it turns out, the decision preserved more than crops. Out of that drained area, an ancient city emerged—and with just days to examine the area before the waters came back, archaeologists successfully mapped what they believe to have been a major city in the Mittani Empire (also spelled Mitanni Empire) built 3,400 years ago.

People in the area knew the city was there when the dam was created in the 1980s, but the buildings and artifacts that survived the city’s destruction in an earthquake around 1350 B.C.E. had never been fully investigated, Live Science’s Patrick Pester reports.

Parts of the city first arose from the depths during a major drought in 2018, as Smithsonian magazine’s Jason Daley reported at the time. During that brief time, researchers were able to explore a lost palace with massive, 22-foot-high walls, some six feet thick, and discovered “remains of wall paintings in vibrant shades of red and blue.” However, the archaeologists ultimately didn’t have enough time to sufficiently map the city before the waters returned.

So when drought struck again this year, a research team was assembled in a matter of days to hurry out to the site, according to a statement from the University of Tübingen. Researchers obtained short-notice funding through the University of Freiburg to examine as much as the city as possible before it was re-submerged.

Now, archaeologists have a clearer picture of what this ancient city might have been like, thanks to the team’s mapping of numerous large buildings and uncovering of hundreds of artifacts. Among the buildings found were an industrial complex, a fortification with a wall and towers, and a multi-story storage building.

“The huge magazine building is of particular importance because enormous quantities of goods must have been stored in it, probably brought from all over the region,” Ivana Puljiz, an assistant professor of archaeology from the University of Freiburg, says in the statement.

Hasan Ahmed Qasim, chairman of the Kurdistan Archaeology Organization and the expedition’s leader, adds that “The excavation results show that the site was an important center in the Mittani Empire.”

The team was impressed by how well many of the walls—sometimes reaching almost ten feet high—were preserved, despite being made of sun-dried mud and submerged for more than 40 years. That’s likely due the earthquake that destroyed the city. It turned the upper parts of the walls into rubble, which buried and protected the lower parts of the city for centuries.

Also astonishingly well-preserved: five ceramic vessels containing over 100 cuneiform tablets, some still in their clay envelopes. In the statement, Peter Pfälzner, a professor of archaeology at the University of Tübingen, describes the underwater survival of unfired clay tablets as being “close to a miracle.” The team hopes the tablets, some of which could be letters, will shed more light on what the city and its daily life were like.

It’s possible the site could be the ancient city of Zakhiku, a major hub in the Mittani Empire, which lasted from roughly 1500 to 1350 B.C.E. One of a number of kingdoms and states founded by the Indo-Iranians in Mesopotamia and Syria, at its peak the empire spanned just over 600 miles, extending from the Zagros Mountains to the Mediterranean Sea.

In the empire’s early years, the Mittanis tussled with Egypt over control of Syria until a truce was reached with Egyptian pharaoh Thutmose IV around 1420 B.C.E. The Mittanis fell to the Hittite Empire around 1360 B.C.E., and the Assyrians soon took over the area.

Though the emergence of this underwater city is incredible, it’s not the only abandoned town to have been revealed from the depths by drought this year. In February, the Spanish village of Aceredo—which was flooded to create the Alto Lindoso reservoir in 1992—was fully exposed during a drought, Gizmodo’s Molly Taft reports. Though the tops of houses are sometimes visible when the reservoir’s water levels drop, full buildings had never been exposed before this winter, which was unnaturally dry due to climate change.

Drought can also reveal other archaeological wonders. The 4,000- to 7,000-year-old megalithic monument known as the Dolmen of Guadalperal emerged in 2019 when drought hit a Spanish reservoir that had covered the stones for about 60 years, Smithsonian’s Meilan Solly reported at the time.

Iraq has been hit especially hard by global warming—temperatures there are rising twice as fast as the global average, according to PBS’ Simona Foltyn. Average annual rainfall is down by 10 percent, and as a result, historic wetlands have dried up, livestock are dying, and people are struggling to get fresh water.

For now, there’s still enough water that the Mosul reservoir refilled in February, ending the researchers’ investigation. To protect the city, the team covered the area in tarps overlaid with gravel fill before the waters fully re-flooded the area.

Drought is expected to continue to plague the region. That will be a disaster for locals—and could present other opportunities for archaeologists. There’s likely plenty left to discover: As Qasim told the Art Newspaper’s Hadani Ditmars, “There are more than 100 underwater sites in the Eastern Tigris area” alone.