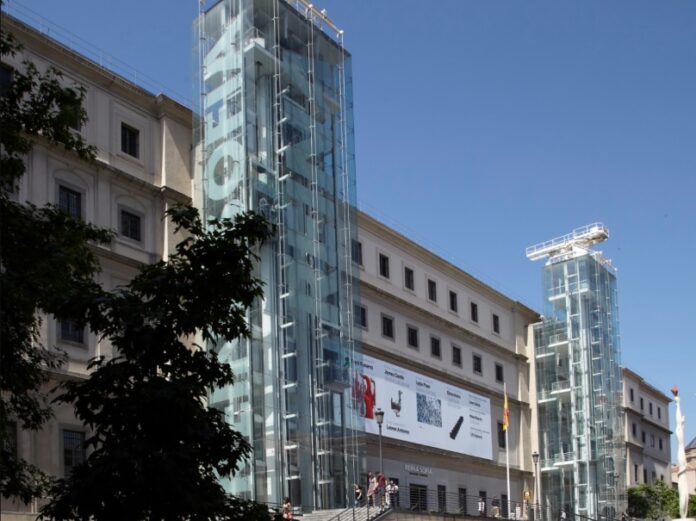 A Italian tourist at the Museo Reina Sofía in Madrid damaged an artwork last week when she tripped while trying to take a selfie with the work.

Alberto Sánchez’s ballet set for La romería de los cornudos (The Pilgrimage of Cuckolds), 1933, was reportedly torn in one part by the tourist who fell on the work, according to the Spanish newspaper ABC. As she fell, she grabbed hold of the piece and ripped part of its wallpaper.

The Pilgrimage of Cuckolds was originally created as a set for the eponymous one-act ballet written by Federico García Lorca and Cipriano Rivas Cherif. Its protagonist is a man who tries to seduce a married women who is on a religious pilgrimage with her husband in the hope of getting pregnant.

As part of a recent collection rehang of the museum’s permanent collection, the Sánchez is now located in a room near Pablo Picasso’s 1937 painting Guernica, which is one of the Reina Sofía’s most well-known attractions.

The museum said the damage was not serious, according to El Pais. “It is an accident, fortunately of few consequences,” a spokesperson said. The damage to the work “was small and without any intention.”

This is not the first time a work of art has been damaged as a result of person taking a selfie. In 2020, for example, a visitor to the Museo Antonio Canova in Possagno, Italy, damaged a plaster model of a 19th-century sculpture, breaking off two if its toes. In a similar vein, in 2017, a visitor to a Yayoi Kusama show at the Hirshhorn Museum and Sculpture Garden in Washington, D.C. smashed a pumpkin sculpture while taking a selfie, resulting in what the museum said was “minor damage” to the work.