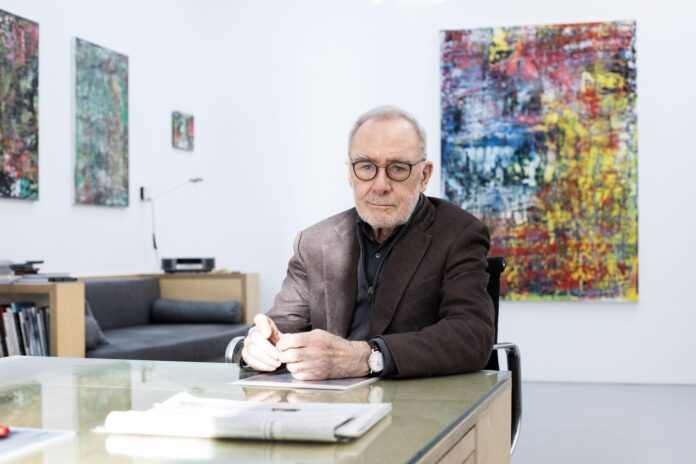 The German painter Gerhard Richter, one of the most celebrated—and expensive—living artists, is now represented exclusively by David Zwirner, the New York-headquartered gallery revealed today (7 December). He will have his first solo show with the gallery, at one of its Manhattan spaces, in March 2023. Richter has shown with Marian Goodman Gallery for several decades, and has had five solo exhibitions with Gagosian over the past decade (though he was never represented by the gallery).

Richter, for his part, framed the move as something of a family reunion—one of his earliest solo shows, in 1968, was at Galerie Rudolf Zwirner, the gallery Zwirner’s father ran in Cologne. “I have known David since his childhood as I had already in the 1960s worked closely with his father, Rudolf Zwirner,” the artist says in a statement. “I feel this represents a beautiful continuity across generations.”

While Richter is preparing for his debut solo show with Zwirner, the gallery has presented secondary market works of his at fairs previously, most notably selling the large black-and-white canvas Versammlung (1966) for $20m at Art Basel in Basel in 2019. That prize painting, which had not come to market in nearly a half-century, was consigned by the Italian collectors Francesca and Massimo Valsecchi to raise funds for the restoration of a palazzo in Palermo.

Zwirner’s sale of Versammlung for $20m at Art Basel was a startling sum for an art fair sale, but it is far from the top end of Richter’s market. Large-scale works from his famous Abstraktes Bild series—colloquially known as his “squeegee paintings” due to his preferred application tool—routinely fetch more than $30m at auction and account for nine of his top ten auction results. His current secondary market record was achieved at a Sotheby’s sale in London in 2015, when hedge fund billionaire Ken Griffin paid of £35.8m ($46.3m, including fees) for an Abstraktes Bild canvas from 1986.

In addition to his many photo-based paintings like Versammlung and the large, colourful Abstraktes Bild, Richter’s oeuvre spans spare geometric compositions, sculpture, photography and more. He is widely considered to be, along with contemporaries Sigmar Polke and Anselm Kiefer, one of the most important German artists to emerge since the end of the Second World War.

“By avoiding adherence to any single ideology or dogma, Richter has been able to both celebrate and subvert the very act of painting,” Zwirner says. “In the process, he has single-handedly opened up the medium to entirely new possibilities and investigations.”

In addition to Richter’s forthcoming Zwirner solo debut, he will be featured in the two-artist exhibition Vija Celmins | Gerhard Richter. Double Vision at Hamburger Kunsthalle in Hamburg (1 May-1 August 2023).

A U.K. Couple Found a Literal Hoard of Rare Gold Coins Buried Under Their Kitchen Floor During Home Renovations