Home News From Orwell to Atwood: Visions of a Dystopian America 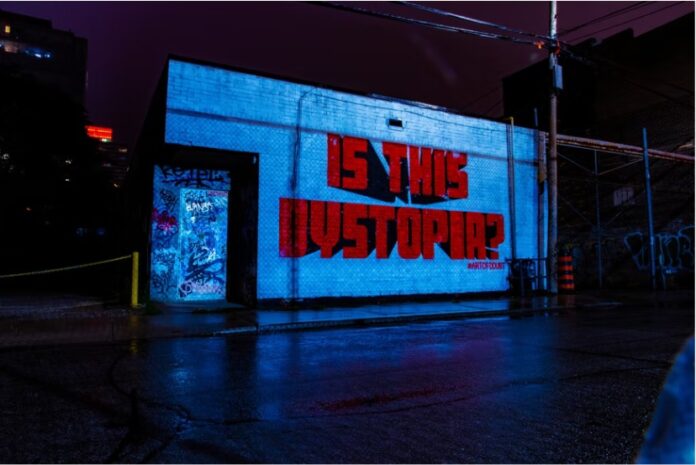 Every generation has its dominant fears. If you grew up in the Cold War era, your main fear was probably another random nuclear strike. Modern-day kids and college teens might not be as dreadful of a nuclear attack, but there are even greater things and plenty going on across the world that can make even the most hopeful young adult a little nervous.

Dystopian literature and fiction help us figure things out and relate to whatever is real and what’s not. Many dystopian authors and their readers are interested in creating perfect essay examples of what makes a dystopian society. Most teens and students read and review the work of such authors in their dystopian society essays to see whether those societies are anything like the real world. While most parts are quite different due to the advancements that we have made as a people, others have scary similarities.

Is there any chance of the world we live in becoming anything like these imagined communities? Well, some parts of the world live the experience. From economic downturn to illegal surveillance of citizens, a radical increase of corporate influence and power, cyber bullying and attacks, and drastic economic inequality, the list of scary things included in various dystopian American novels is endless.

What is a Dystopian Society?

You probably remember utopia from a class, a bible study group, or someone. It depicts a condition, state, or place that is ideally perfect and free from pain, poverty, politics, conditions, etc. Dystopia, conversely, represents an imagined future that is challenging and dehumanizing with oppression and lack of freedom. It is the direct antonym of a utopia.

According to dystopian literature and essays, a dystopian society comprises individuals who live under the illusion of a perfect universe, but which is in reality filled with an incredible amount of oppressive societal control, fear, and hopelessness. Dystopias use fictitious stories to create worst-case scenarios and criticize the current political system, societal norms, and technological trends.

Dystopian literature has sprung into popularity in recent years, and deservedly so. Authors use this type of literature to educate the masses about the dangers of a real-world, commonly labeled Orwellian America. According to dystopian writers, there are four main strategies of dystopian control, including corporate, bureaucratic, technological, and philosophical or religious control.

Books on dystopian societies are perhaps popular because they say things that already exist and then intensify their power and effects on the citizens. The literature act as a warning for possible extreme scenarios and offers suggestions for correction. Besides, connecting literature to things in the real world is a perfect way to teach students what’s essential and what’s not.

·       To create a vivid picture and a correlation between the dystopian literature and the real world, the dystopian protagonist often:

·       Feel trapped within a system and struggles to escape.

·       Believe that something is wrong with their current society

·       Rise against the existing authority trying to return things to ‘normal.’

·       Use their perspective to enlighten the audience about the negative features of the dystopian world.

The Best Dystopias of American writers

Dystopia fiction pieces are stories that close in on the unfortunate reality of the world we live in. Below, we discuss samples of the best novels that paint a dystopian America.

In The Handmaid’s Tale, Margaret Atwood depicts a dystopian society where individuals’ freedom is taken away when restrictions are set, using propaganda to control the citizens. Moreover, creating a hierarchical system caused Gilead citizens to lose their inner abilities to relate well with one another.

This story of a father and a son in the post-apocalyptic world creates a perfect relationship between hope and despair, good and evil, utopia and dystopia. In this book, McCarthy is playing with contrasting aspects of society, the relationship between the physical world of the characters with strong dystopian features and an inner psychological space constituting a utopian state.

When the system creates a discriminative code where felons are genetically “chromed,” instead of rehabilitation, so that their skin color shows how severe their crime is, the wall between the church and the state crumbled. The story of how Hannah got pregnant after an illegal affair with the reverend, Aidan Dale, during an outbreak of a sexually transmitted infection, causing most women to be infertile. To save the reputation and honor of reverend Dale, Hannah performs an illegal abortion and wakes up in jail, and her skin chromed color red to reflect murder.

Lois Lowry tears down the supposed utopian world of a twelve-year-old Jonas when he’s chosen for a task as the next Receiver of Memories. He now has the role to be the sole bearer of memories, including those of the time before “Sameness.” The ambiguities of evil and good, wrong and right, and his role negotiating between the past and the future becomes too much a burden, especially when he realizes that maybe “those who cannot remember the past are doomed to repeat it.”

Animal Farm is one of the best creations of a dystopian society. The story is a perfect allegory of the Russian Revolution. Orwell shows how what is considered a utopian state(communism) can as quickly devolve and turn into the dreaded dystopia.

Dystopian literature began as a speculative response to utopian state and literature and has developed rapidly. This type of literature gives people a vision for the future though sometimes exaggeratedly. Dystopian novels challenge readers to reflect on the current political and social systems and act effectively.

How to turn a flour mill into a world-class museum: architect Alejandro Aravena on his mammoth Qatar project