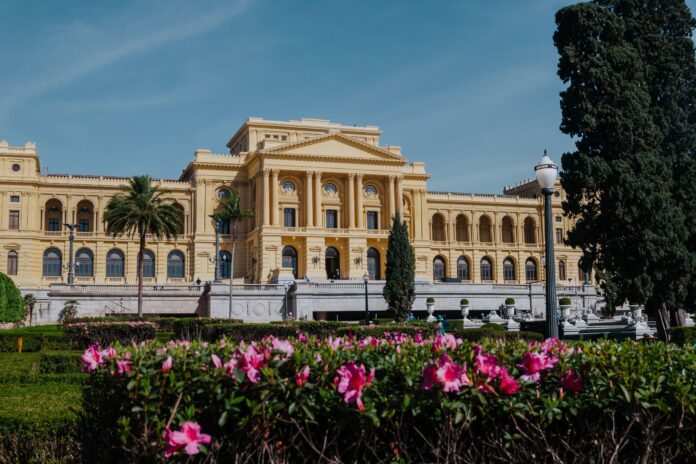 The Museu Paulista of the University of São Paulo—known as the Museu do Ipiranga (Ipiranga Museum)—reopens on 7 September after a $45m renovation and nearly decade-long closure.

The museum, located on the Ipiranga brook in southeast São Paulo, originally opened on 7 September 1895, and was envisioned as a monument to the site where Brazilian independence had been declared in 1822. It holds a vast collection of more than 450,000 objects and artworks related to the imperial Brazilian era.

The renovation entails creating more exhibition space—from 12 to 49 galleries—and the addition of audiovisual components, immersive rooms, interactive spaces and the restoration of the Versailles-inspired garden in front of the museum.

During the nine-year closure, more than 3,000 objects from the collection were also conserved, such as the work Independência ou Morte (Independence or Death) (1888) by Pedro Américo de Figueiredo e Melo—a cornerstone of the collection, which depicts the moment when the political rupture with Portugal was announced. An intricate maquette of São Paulo made in 1922 by Henrique Bakkenist based on 19th century cartographic maps has also been restored.

The museum reopens with 11 permanent exhibitions and a rotating show, spanning more than 3,000 objects, most dating from the 19th and 20th centuries but also including colonial-era pieces.

Curators say that one important aspect of the curatorial programming for the bicentennial inauguration is its approach to works that honour controversial figures and situations, such as statues of brutal pioneers and paintings celebrating the submission of Indigenous populations.

“We know that the history of Brazil is made up of clashes, confrontations, struggles and disputes,” says the art historian and curator Paulo César Garcez Marins. “But in the Ipiranga museum, the set of images always portrayed pacified bodies; there are no combats here.”

An interactive screen near the entrance of the museum asks: “Can pioneers be considered heroes?” A few screens later, a conclusion is reached: “The museum does not agree with this heroic image of the flags, which simplifies a past that also involved violence and enslavement.”

Objects in the collection should be “treated as historical documents”, says Denise Peixoto, one of the museum’s educators. “They show us about a way of thinking of certain social groups in a certain period of our history. The objective is to give the visitor the necessary elements so that he can critically understand these creations.”

The updated curatorial approach aims to resonate with future visitors by telling a more complete history of colonialism in the country. The museum expects visitors will number between 900,000 to 1 million per year.

“The building was not born a museum but as a monument to independence,” Amâncio Jorge de Oliveira, the vice president of the museum, tells The Art Newspaper. “Now, in the bicentennial of Brazilian independence, we can discuss our identity and our history through the building and exhibitions.”