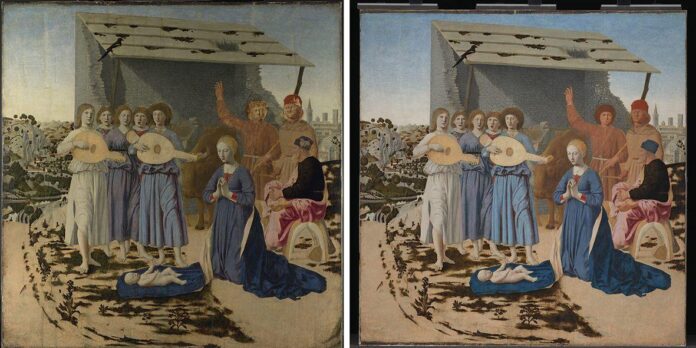 A new restoration of Piero della Francesca’s wondrous Nativity (early 1480s) has solved a longstanding mystery: the painting is not unfinished, as has long been believed. Rather, the National Gallery in London proposes the picture represents a profound and moving vision of Christ’s birth, as seen through the eyes of the 14th-century saint and mystic Bridget of Sweden. The painting has just gone back on display in London, following 15 months of painstaking conservation treatment in the museum’s studios.

Piero’s picture is one of the National Gallery’s most cherished masterpieces for many reasons: the refined grace and eloquence of its figures, the rich softness and luminosity of its colours (painted in the newly refined oil technique), its supreme balance and harmony, its spiritual and narrative power, and its combination of solemn grandeur and rustic simplicity. The Virgin kneels humbly on a rocky promontory, adoring the Christ child, who lies naked on the ground before her (protected from the bare soil by the spread of her blue mantle, which she has allowed to fall to her waist). His arms reach out to her—as in St Bridget’s vision—while angels provide a polyphonic musical accompaniment. Behind them, the ground falls away to lead the eye through the twisting Umbrian landscape of Piero’s native San Sepolcro beyond. Two shepherds, the elderly Joseph and an ox and donkey bear witness to this vision. And it is this visionary quality that has been given a revelatory new dimension.

Before delving into this further, it is worth recounting some of the picture’s difficult history condition-wise, and its rich documentation. To begin with, it is not a small altarpiece as was once assumed. Documents of 1500, 1514 and 1515 reveal that this sizeable painting (124.4cm by 122.6cm) hung in the bedchamber of Piero’s rather imposing family palace as a devotional work for private contemplation. In 1515, when it was part of a family dispute, it was given a high valuation and not described as incomplete, whereas two other pictures were specified as unfinished. The Nativity stayed in the family until 1825, when it was sent to a relation in Florence. By then it was already in a bad state and had suffered some overpainting.

In 1861, Charles Eastlake, the first director of the National Gallery, saw it and fell in love with it, but he was frustrated in his attempts to buy it by the collector Alexander Barker, who subsequently heavily restored it. By the time the National Gallery bought it in 1874, the wooden panel had broken open, the painting was heavily stained and the shepherds had suffered such abrasive cleaning that their images had been worn away to the underdrawing. Nevertheless, the museum paid an enormous amount for the painting (£2,415—almost twice what it paid for Botticelli’s Mars and Venus at the same time).

Prime Minister Benjamin Disraeli was forced to defend the purchase in Parliament, in response to a question that quoted a letter in The Times from the connoisseur and curator John Charles Robinson, stating that “the painting in question, having been a wreck and ruined beyond redemption by decay, has been entirely re-painted”. (Robinson later became Surveyor of the Queen’s Pictures and also sold the Salvator Mundi to Francis Cook.) Disraeli replied that he “congratulated the country on having acquired… a picture of the most rare and interesting character, and which I think, will add to the beauty and value of the National Collection”.

When the painting was restored in 1884 the gallery was indeed shocked by its underlying condition and the damaged state of the poplar panel. A heavy cradle, designed to hold the panel together, was removed in 1949 but a subsequent 1950 restoration was too interventionist—and the painting was also proving extremely fragile. While the 1950 work attempted to deal with the major paint losses, it didn’t do much to rectify the previous overcleaning, in which, most notably, the heads of the shepherds had been almost completely removed.

Jill Dunkerton, the senior restorer at the National Gallery, has now had the immensely challenging and pleasurable task of restoring the picture. She has trodden the fine path between bringing the painting back to something like its former glory, while making sure her interventions have been kept to a minimum. The colours are now even more of a revelation. The painting is essentially an embodiment of the heavenly music produced by the angelic choir and musicians (St Bridget heard singing of “miraculous sweetness and beauty”), while the angels’ garments in their graduated hues of blueish whites to pinkish blues provide chromatic chords.

One of the most pleasing and surprising findings of the restoration has come in perhaps one of the least remarkable areas of the painting: the small, grey stones of the stable structure behind the figures. Here, retouching of the abraded paint has revealed a patch of lighter stones in one area, leading the viewer to realise that there is, in fact, a shaft of light—part of Piero’s individual and highly original interpretation of an important element of St Bridget’s vision—beaming through a hole in the straw roof of the stable. It is this that the young shepherd points to, instructing us to witness the light for ourselves. The lack of cast shadows in the picture—previously seen as an indication that the picture was unfinished—can now be seen as amplifying this visionary aspect.

And the shepherds themselves weren’t unfinished at all, just “horribly abraded from too much overcleaning”, says Dunkerton. Luckily Piero’s “beautiful underdrawing” still survives, and Dunkerton has painted the shepherds partially back in, thinly glazing over the lines of the underdrawing while not overfinishing through subsequent guesswork. Now the figures, in their earthly pigments, recede just as they should.

The rest of the other losses have been corrected with very tiny precise brushes, and the paint built up “slowly, slowly, slowly” as opposed to the interventions of the past. The biggest revelation, for Dunkerton, has been how—through this approach—the whole picture has come together, again revealing the masterly play of light, colour and space. Dunkerton has also developed an enhanced appreciation for just how carefully Piero balanced the composition and how he corrected his own mistakes (such as painting over the ox’s horn, which clashed with the neck of the angel’s lute) to make the picture more legible and understandable. The magpie, too, perched on the stable roof, is critical to anchoring the composition.

Finally, she has come to understand that the picture needs to be hung at about shoulder height—as it would have been in the palace bedchamber. This miraculously enables the whole landscape, from its sparse tilted foreground to its distant humanised landscape, to occupy an enormous pictorial and psychological space.

• Piero della Francesca’s Nativity will go back on public display at the National Gallery, London from 1 December