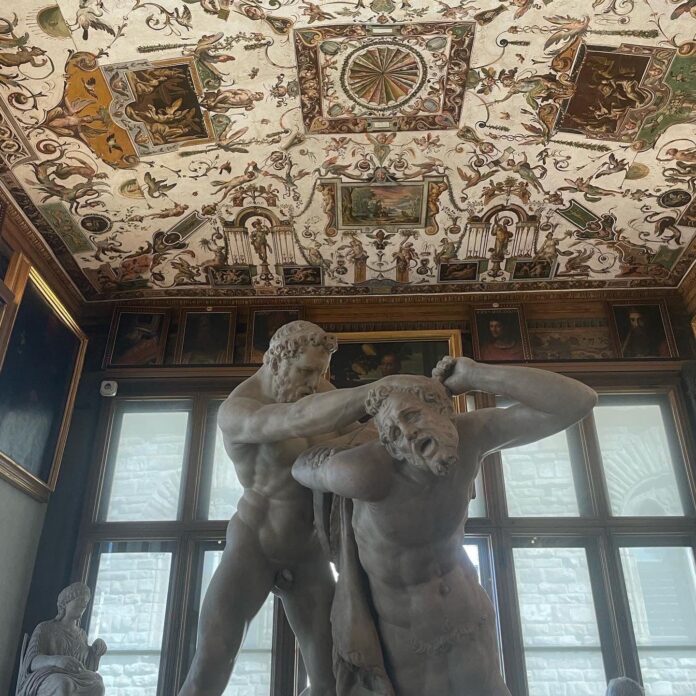 The director of the Uffizi Galleries in Florence has clashed with the newly appointed Italian minister for culture over staffing levels at Italy’s national museums. Eike Schmidt, the Uffizi chief, says he is asking for “reinforcements” after the new culture secretary Gennaro Sangiuliano, who was appointed last month, criticised the Florence museum for closing over the All Saints Day holiday weekend, shutting on 31 October. The museum was open on 1 November.

The Uffizi is usually closed on Mondays but sometimes opens out of hours on bank holidays. In a letter quoted in the German magazine Monopol, Sangiuliano told Schmidt: “It does not escape your intelligence that a closure of this kind, in addition to constituting a loss of income, represents damage to the image of the Uffizi Galleries and the entire national museum system.”

Schmidt says in a statement that in the past seven years, in the face of increased visitors and spending cuts across departments, museum management has always done its “utmost” to guarantee out of hours openings. “But without reversing the reductions in the workforce we can no longer do it,” he says. An Uffizi spokesman adds that “the museum tried, as always, to have a special opening for that day, but it was not possible due to an insufficient number of workers available and ministry-imposed limits to [help] pay for them.”

Visitors are increasingly returning to Italian museums following the Covid-19 pandemic, Schmidt adds. “This is reflected in the numbers of visitors the last All Saints’ [bridging weekend, Saturday to Tuesday] when 55,611 people visited the museums of the Uffizi Galleries. However, on 31 October we were only able to open the Giardino di Boboli, when 7,338 visitors enjoyed the good weather, but not the sculpture and paintings galleries, and not Palazzo Pitti.

“Like the minister, I also think it’s a serious issue that the Uffizi and the Accademia Gallery were closed on Monday, and the Bargello also on Tuesday 1 November, for the same grave reason: the serious shortage of staff in state museums. In recent years we have repeatedly sent reports about this issue to the ministry, but the problem has worsened.” Schmdit warns that the issue is now “unsolvable” without direct intervention from central government.

Despite the financial cutbacks, Schmidt says that the museum has been able to offer extra openings but the number of warders reaching retirement age is, for instance, making this difficult. “We have also asked the ministry in recent years to be able to fund the service from the in-house Ales Ministry [the private arm of the ministry], or [tender out] some parts of the surveillance service to an external company, but for both requests we received a negative response,” he adds.

Sangiuliano is serving in the new government led by Giorgia Meloni who was sworn in as Italy’s first woman prime minister on 22 October, forming a far-right coalition government with Silvio Berlusconi’s Forza Italia party and Matteo Salvini, leader of the Lega party. Meloni’s party Fratelli d’Italia (Brothers of Italy) is descended from the National Alliance (a successor of the post-fascist MSI party).

Sangiuliano was previously the editor-in-chief of Italy’s state-owned news channel TG2 overseen by the national public broadcasting company RAI. In the 1990s, he worked at the newspaper L’Indipendente and Libero. He has also published biographies of the Russian President Vladimir Putin, former US presidents Donald Trump and Ronald Reagan, and the Chinese President Xi Jinping. Sangiuliano also co-authored the book The Fourth Reich: How Germany Subdued Europe (2014).

Following his appointment, Sangiuliano said he hoped to launch exhibitions dedicated to Futurism and one of its leading proponents, Umberto Boccioni, and the Italian Renaissance. “The two historical and cultural moments, each in their own way, have projected Italy onto the world,” he said.

“I don’t think there are ideological motivations behind this minister’s intentions… I believe that the minister thinks more about the impact across the media of a ‘best-seller’ [blockbuster movement] such as Futurism—Boccioni and Balla, for example, are very popular names in Italy—than about a political message,” says the Italian art critic Franco Fanelli, a correspondent at Il Giornale dell’Arte. “We can say the same for the Renaissance, a ‘brand’ that everyone recognises even though very few would be able to outline its chronological boundaries and its true proponents. It is however of very popular icons, such as Botticelli’s The Birth of Venus in the Uffizi, Mona Lisa, Raphael’s La Fornarina (around 1518)… these are ‘made in Italy’ artists and works known by the Italian public. In short, the Renaissance and Futurism are two winning ‘brands’—everyone thinks they know them,” Fanelli adds.