Home News ‘It’s about setting the record straight’: A Warhol of disputed authenticity and... 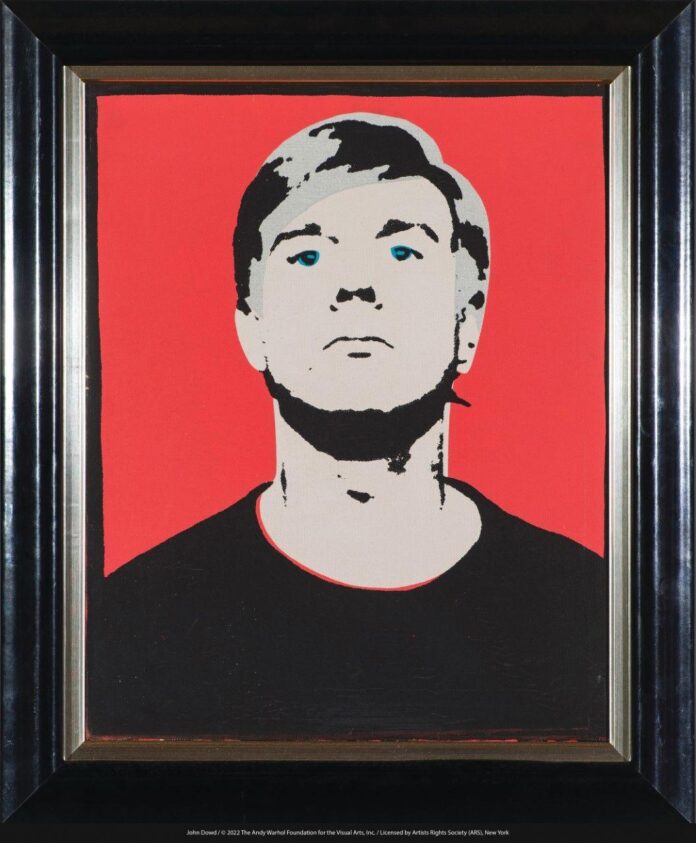 A controversial and unsigned Andy Warhol painting owned by the 91-year-old New York collector Richard Ekstract hits the block at Larsen Art Auction in Scottsdale, Arizona, in October with an estimate of $500,000 to $700,000.

Self-Portrait (red), from 1965, is a 20in by 16in silkscreen canvas (on cotton duck) that hails from a group of at least ten identical portraits using the same acetate separations that created Warhol’s famous 1964 Self-Portrait, featuring an expressionless head and shoulders of the 36-year-old artist in a black t-shirt against a red background. The 1964 painting sold at Sotheby’s New York in November 2006 for $3.7m, including fees.

One of the 1965 group, owned by the London-based film-maker Joe Simon-Whelan, was the subject of a $20m class action lawsuit in the US in late 2007 against the Andy Warhol Foundation for the Visual Arts, its Andy Warhol Art Authentication Board, the Warhol estate and Vincent Fremont, the exclusive sales agent for the foundation, after the painting was rejected by the board as inauthentic in 2001 and again in 2003. That painting, which Simon-Whelan acquired in 1989 for $195,000, became known as “double-denied”, although the late Fred Hughes, who was the sole executor of Warhol’s estate, stamped the painting as a viable Warhol before the advent of the authentication committee.

The lawsuit was settled in 2010, with all claims withdrawn by Simon-Whelan. While the Warhol Foundation trumpeted the settlement as a “complete vindication”, it had spent more than $7m defending itself against the allegations of fraud, collusion and manipulation to control the artist’s market by denying works and selling its own inventory from the estate at inflated prices. As a result, the foundation disbanded the 16-year-old authentication committee in 2011, spurring the Jean-Michael Basquiat and Keith Haring authentication committees to follow suit the following year for fear of lawsuits from disgruntled owners of rejected works of art.

A dozen years after that courtroom marathon, Ekstract is taking his self-portrait to market, backed by Richard Polsky, the self-ordained art authenticator of Basquiat, Haring and Warhol, and the author of several books including I Sold Andy Warhol (Too Soon). He declares: “Self-Portrait (red) should be considered a genuine Warhol.”

Polsky adds: “I would estimate the number of Warhols, Basquiats and Harings we’ve authenticated since 2015 to be in the ‘mid-hundreds’.”

Asked why he is selling the painting, Ekstract says: “I never intended to sell it—it wasn’t meant for that purpose—but I’m 91 and you want to get your estate in order. So that’s my plan.”

Ekstract says he met Warhol in the 1960s when he was the publisher of Tape Recording magazine and provided Warhol with test used audio cassettes for his interviews. The collector also arranged for Warhol to get a state-of-the-art Norelco video recorder for his prolific film-making career. He organised a lavish and elaborate underground party to celebrate the artist’s 1966 film Outer and Inner Space, starring Edie Sedgwick, staging it in the bowels of the Waldorf Astoria Hotel, New York City, where there were unused train tracks.

“I told Andy, you know what my friends are doing for you for the party? What are you going to do for them?” Ekstract says.

And that was when Warhol gave him the acetate separations for the 1964 self-portrait—and, crucially, permission to make copies offsite and away from the artist’s studio, according to the collector. “I didn’t have him sign them,” Ekstract says, “because they weren’t for sale. They were souvenirs of an event. So we gave them to the appropriate people, and nobody paid anything for them.”

Decades later, Ekstract says that Simon-Whelan asked him to submit his Warhol self-portrait to the authentication committee and join the lawsuit against the foundation. Ekstract submitted the painting but declined to join the suit, saying that his lawyer had told him: “It’s going to cost you a lot of money and there’s too much downside.”

Asked what the authentication board ruled, Ekstract replies: “Guess what? It came back and said it wasn’t a Warhol.” Referring to the lawsuit, he adds: “It ended up with nothing. Nobody won and that was that until now.” The collector says it was Polsky who called him up and asked if he was prepared to sell his painting. “He said he had an auctioneer in Scottsdale who wanted to, and I said OK. Polsky told me he’s the world’s leading authenticator of Warhol, and as far as I know, he is.”

“The self-portrait is here in the gallery, and I think all the publicity the self-portrait has gotten over the years is good for Richard Ekstract and his self-portrait. It’s just a matter of to which price point somebody interested in the work might go.”

The auctioneer offered another Warhol, Little Electric Chair from 1964, owned by the rock legend Alice Cooper, at its October 2021 sale, but the work didn’t sell. Larsen says it failed to find a home “because they wanted the estimate to be $2.5m-$4.5m. We had interest in the work from a number of important collectors but they just felt it was too high a price for the work.”

That painting, enriched by another story that it had languished in the garage of the rock star’s mother for 40 years, has never been presented to the authentication committee or included in the foundation’s multi-volume Andy Warhol Catalogue Raisonné: Paintings, Sculptures and Drawings. Polsky has authenticated the work.

Asked about the market viability of Ekstract’s painting, Georges Lederman, a seasoned defence lawyer with Withersworldwide who has represented high-profile clients who have been accused, or are victims, of art crime, says: “The painting was rejected by the committee but authenticated by Richard Polsky. Is that insurance for anyone? The fact is, you don’t know what you’re buying—that’s the issue. Polsky is the one on the hook because the auction house is being upfront here. I don’t know what a prospective buyer would be able to do upon resale of this. It might be the end of the line.”

“At that estimate of $500,000-$700,000,” Polsky counters, “there will be a number of people willing to roll the dice. This is about vindication and setting the record straight.”