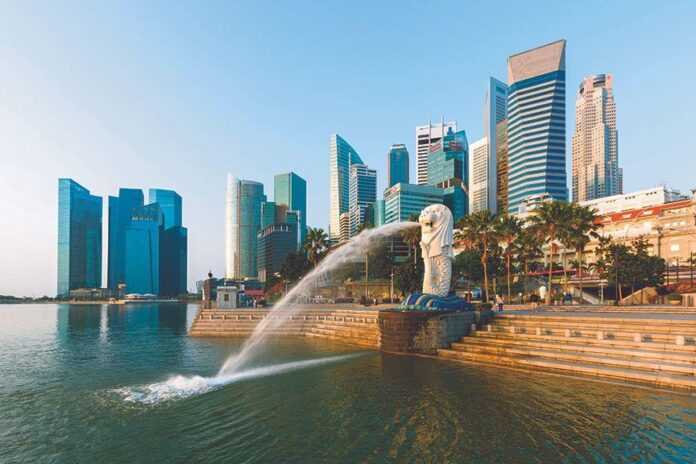 Singapore is on full throttle this month thanks to the highly anticipated launch of international art fair ART SG, scheduled to run from 11 to 15 January at Marina Bay Sands Expo and Convention Centre, in the city’s business district and tourist-filled bayfront area.

Organised by The Art Assembly, which operates a portfolio of fairs across Asia—including Taipei Dangdai, Sydney Contemporary, India Art Fair, Photofairs Shanghai and the forthcoming Tokyo Gendai—ART SG presents more than 160 galleries from across Southeast Asia, Asia Pacifi c and beyond, including big names such as David Zwirner, Kukje Gallery, Pearl Lam Galleries and Mizuma Gallery. Organisers are aiming to showcase the best of the region with sectors such as Futures and Reframe, focusing on young galleries and digital art respectively, as well as a Film sector curated by Cosmin Costinas, the former executive director of Hong Kong’s Para Site, and Gridthiya Gaweewong, the artistic director of the upcoming Thailand Biennale.

Art SG, which has been postponed multiple times since the announcement of its creation in 2018, is launching at the right time. Because of the country’s stable governance during the pandemic and its relaxed Covid restrictions, the city-state is at present experiencing a phenomenal influx of wealth. “Over the past three years, Singapore has seen dramatic growth in resident communities of wealthy Chinese, Indonesians and Western expatriates who have made Singapore their permanent base,” says the co-founder of ART SG Magnus Renfrew.

Blue-chip gallerists are definitely paying attention to the city. “Singapore has emerged as a new hub of technology and cryptocurrency, signalling a new generation of wealth and new tastes and trends,” says Bo Young Song, vice-president of the Seoul-based Kukje Gallery, while Leo Xu, a senior director at David Zwirner Hong Kong, notes a “growing appetite for art, with many new players and buyers who are keen to collect and seeking advice and guidance”.

In fact, MCH Group, Art Basel’s parent company, bought back a 15% stake in ART SG last year, after divesting from the fair in November 2018. Art Basel is also in its second year of partnership with Singapore’s boutique fair S.E.A. Focus. Additionally, Hong Kong’s WOAW Gallery and Tokyo’s Whitestone Gallery are opening outposts in the city around the same time as the fair, while Lehmann Maupin, which has locations in New York, London, Hong Kong and Seoul, has expanded its operations into the city, appointing a Singapore-based director, Ken Tan, to oversee the gallery’s activities in Southeast Asia. There has also been renewed interest in Singapore from auction houses Sotheby’s, Christie’s and Phillips.

However, while international dealers view Singapore as a potential epicentre for art in Southeast Asia, the rising generation of young collectors in the region have more global appetites. Michael Tay, a Singaporean art collector and a member of ART SG’s advisory group, is convinced that Singaporeans don’t necessarily want to confine themselves to one specific regional genre. “Singaporeans are global citizens who are mostly well travelled; our interests and tastes are similar to citizens of other global cities. I believe that ART SG will match those desires,” he says. Shuyin Yang, Art SG’s director, agrees. “The fair is well-positioned as a catalyst for the continued growth of the Singapore art market as it takes on an even bigger role as a gateway for the region, connecting to the international art world,” she says.

ART SG is not the country’s first attempt at a fair with ambitions to bridge the regional and global market. Art Stage Singapore, which launched in 2010, was cancelled at the last minute in 2019 due to financial problems. Nonetheless, dealers remain optimistic this time around. “The landscape is different now and the whole context for art fairs is no longer the same,” Xu says. “The success of Frieze Seoul and Art021 have demonstrated the value of regional fairs.”