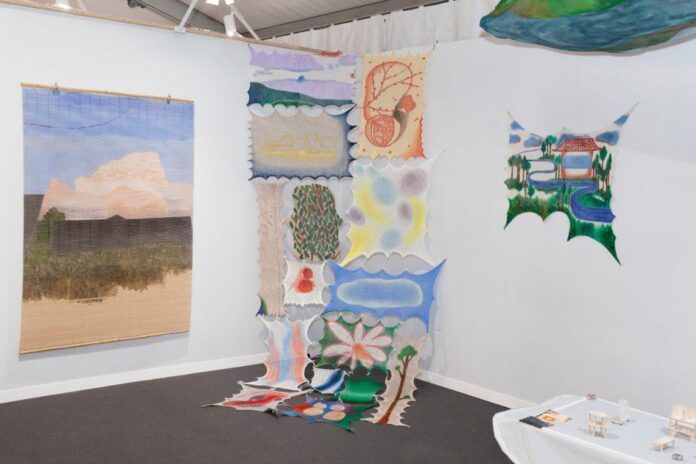 The Asia Now art fair opened on Friday, October 21, in a glamorous new location at La Monnaie de Paris, a Neoclassical building that once housed the Paris Mint. With 88 participating galleries, presenting artists from some 40 different countries in Asia, the Middle East, and their diaspora, as well as a packed program of curated special projects and off-site shows, the show’s eighth edition (running until October 23) is one of the largest-ever events in Paris dedicated to art from the region.

The new, larger location “corresponded with our desire to welcome everyone with joy and our arms wide open,” said the fair’s founder, Alexandra Fain. This festive atmosphere was also reflected in the fair’s theme, “Feux de joie” or “Bonfire.” And the effort seems to have paid off. with some 9,500 visitors attending the preview day.

International attendees were back after a long hiatus, since ongoing pandemic travel restrictions made it particularly difficult for visitors from Asia to come to last year’s fair, the organizers said. And it was clear to everyone that the new Paris+ fair by Art Basel, held simultaneously this week in Paris, did its fair share of drawing crowds to the capital.

“We met quite a lot of new potential collectors, particularly from Asia, and we can really see they’re back in Europe,” said Adeline Jeudy, the co-founder of Galerie LJ in Paris. “It’s great news.”

Such buoyant attitudes were tempered by the growing energy crisis and concerns about inflation, as well as the ongoing war in Ukraine and women-led uprisings in Iran, sparked by the death of 22-year-old Mahsa Amini, after she was arrested by the state’s morality police for improperly covering her hair.

Indeed, throughout the fair, there were plenty of reminders of lives lost in Iran and Ukraine. “We really wanted to put an accent on the independence of Iran, women’s liberty, and allow for strong political gestures by certain Iranian artists, who proposed installations,” Fain said.

For example, the Tehran-based +2 Gallery Presented by Dastan postponed their planned exhibition for the fair due to the struggles in Iran. Instead, they kept their booth walls blank, except for one screen featuring a 2006 documentary film about the Iranian woman artist Behjat Sadr (1924-2009), directed by Mitra Farahani, in which Sadr talks about her life and freedom of expression.

“We altered the original program to raise awareness of the work of Behjat Sadr, a pioneer of modern art in Iran,” said Hormoz Hematian, the founder of +2 Gallery. “We thought it would be important for people to know about her work at this time” because Sadr proves “how much of an inspiration an artist can be to her society [by] not following the norm,” he added.

Another large, outdoor installation, titled Antifragility performance/installation (part of the series: Unstable Equilibrium), by Iranian performance artist Neda Razavipour, addresses female domestic roles, as well as chaos and vulnerability. Presented by AB-ANBAR Gallery, the work features a large dining table covered in a white cloth, topped with a pile of broken dishes. It is part of the “Places” program of large-scale works, installed throughout the building’s courtyards and enclaves, and curated by Kathy Alliou, the director of the Beaux-Arts de Paris’s department of fine arts. 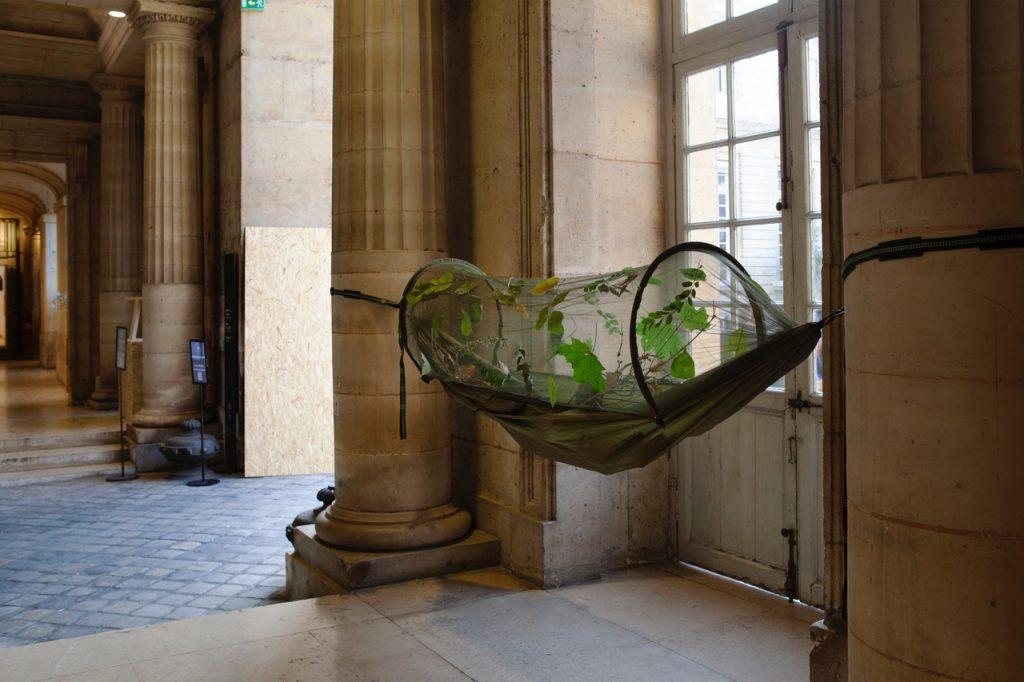 The installation by the Korean artist Park Chae Biole, in the fair’s “Places” program.

Another artwork in “Places” is titled Garden by the Korean artist Park Chae Biole, who is represented with her twin sister Park Chae Dalle by the Paris dealer Anne-Laure Buffard. The piece features a cocoon-like hammock that “whispers” a looped soundtrack of Biole reading her own poetry.

For their first fair, the Park Chae sisters reshaped Buffard’s square booth with colorful suspended works, including, cloud-like light pieces hanging from the ceiling, and knit and stretched textiles that Dalle paints on. “To feel time passing, I create this long working process,” Dalle said about her hand-made canvases, which she treats, paints, and stretches in patchworks that she attaches like giant spiderwebs around the room. Meanwhile, Biole paints on bamboo blinds in similar, watery tones, and constructs small diorama sculptures. Both sisters also write and read poetry in their works.

Buffard, who opened her own gallery earlier this year, is one of more than 30 new-comers to the fair. She had made several sales to international visitors by the end of the first day, she said, and received serious interest from one museum about acquiring several works from the Park Chae sisters, whose pieces range in price from €1,000 to €25,000.

“This first morning was a real success. I’m impressed by the number of museum groups that they were able to bring,” Buffard said. “People are enthusiastic, and sales are strong.” Among her early visitors were representatives from the Abhishek Basu Foundation in Calcutta.

Another highlight of the fair were the mesmerizing, folkloric paintings by Mumbai-born Rithika Merchant, represented by Galerie LJ, Paris. Merchant will participate in the next Dhaka Art Summit in February 2023, where she has been commissioned to create her first large-format piece by the Samdani Art Foundation. She is also due to be featured in a museum exhibition in the U.S., although further details could not be shared yet, the gallery said. Her paintings range from €3,000 to €12,000, and some had sold during the preview. 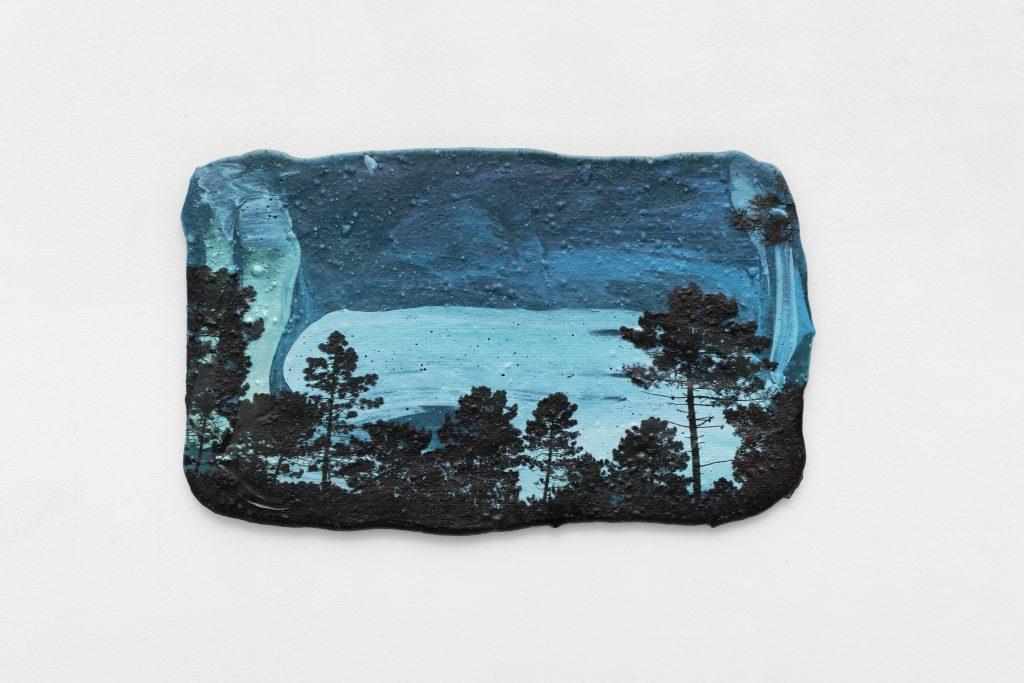 A new discovery at the fair was My-Lan Hoang-Thuy, whose parents fled Vietnam for France during the war. Represented by Galerie Mitterrand, she will have a solo show at the Maison Européenne de la Photographie, in Paris next October. Hoang-Thuy paints and prints images on top of small, dried acrylic and canvas patches. Her works move in and out of abstraction, but maintain dreamy, personal narratives which often refer to her parent’s escape from Vietnam, when they left behind all their possessions.

“My whole life, my parents tried to convince me I was an aristocrat, but we were poor,” she said. That made Hoang-Thuy especially conscious of status symbols, and it’s one of the reasons she won’t categorize her works. “As soon as you name the thing, everything stops,” she said. “I try to make objects that escape all definition.”

Elsewhere, at Yavuz Gallery, from Singapore, Sydney, and soon Munich, Ukrainian artist Stanislava Pinchuk showed Root Systems (ITAofUA, Day 127, Roseltorg), which appeared at first to just be a large, white piece of paper. On closer inspection, viewers found thousands of tiny puncture holes forming letters and numbers which are codes from the Ukrainian IT Army’s DDoS attack on Russian intelligence systems. Pinchuk recently participated in Manifesta 14 in Kosovo and has two other major institutional projects coming up. 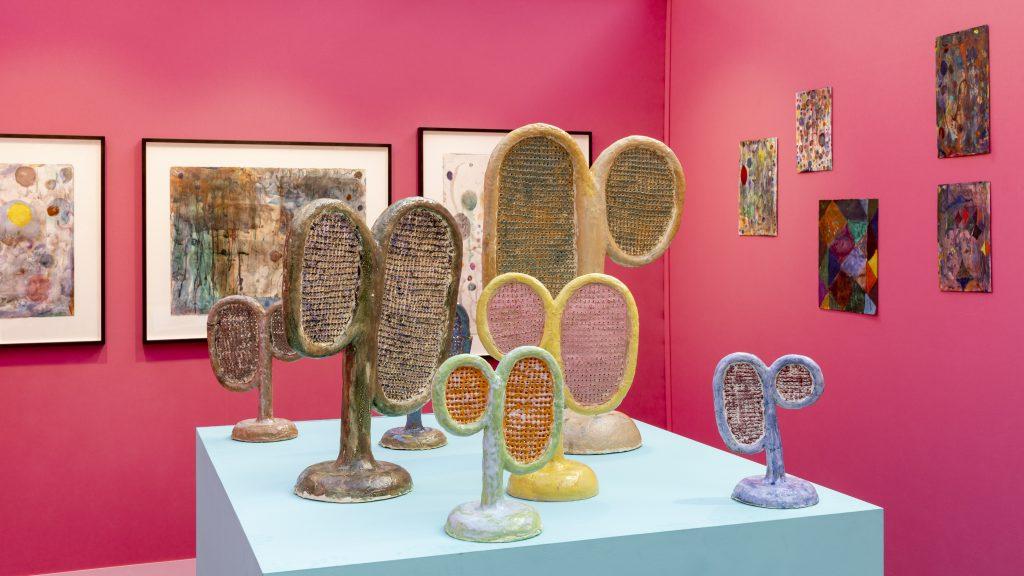 Sokyo Lisbon gallery had a solo booth of work by the Japanese artist Yoichi Umetsu.

Sokyo Lisbon gallery had a solo booth of the Kanagawa-based artist Yoichi Umetsu, who is well known in Japan, but has had little visibility outside his home country. His ceramic sculptures and abstract paintings, priced between €2,600 and €5,000, will become more visible in Europe soon, with plans for an exhibition at an art foundation in Lisbon. The gallery said they sold some works early in the day, and a had a lot of collector interest.

Other new participants included a mix and established galleries, such as the Parisian dealers Frank Elbaz and Loeve & Co, as well as  Richard Saltoun from London, Hafez Gallery from Jeddah, O Gallery from Tehran, Ora-Ora from Hong Kong, and P21 from Seoul.

Local gallery Almine Rech said they had sold a few works priced between €45,000 and €100,000 by Minjung Kim, while Perrotin had a lot of interest in their Takashi Murakami show of vases and painted wooden storage boxes, priced between $8,800 and $30,800.

Other special projects at the fair included the European edition of Do it China (2021), a Chinese and English publication edited by Hans Ulrich Obrist and Cao Dan. The book includes 108 recipe-like instructions from Chinese artists on how to make an artwork. First released during the pandemic lockdown, the idea was inspired by cookbooks, a popular source of at-home activity for many.

And the off-site programs included four exhibits running until 23 January, 2023 at the Musée national des arts asiatique—Guimet, including recently discovered work by the pioneering photojournalist Anne de Henning about the Bangladesh war of independence.

“There are so many different proposals, and it’s hard to have an opinion, but I love the location and the energy,” said Belgian curator Gregory Lang, who particularly liked the fair’s “Mingei Asia Now” exhibitions curated by Nicolas Trembley.