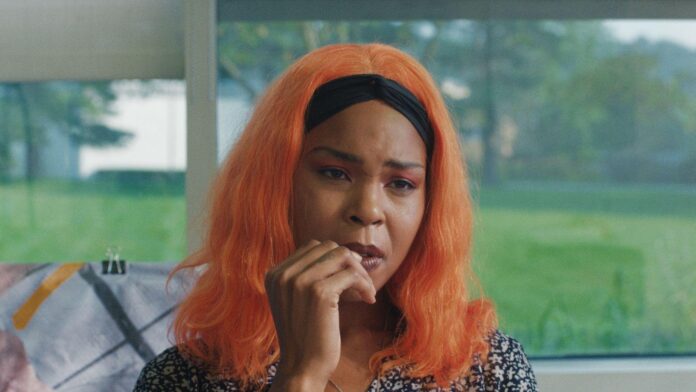 The outsize importance placed on Masters of Fine Arts programmes, a topic of much debate in the art world, is at the crux of artist Martine Syms’s new feature film The African Desperate. It opens with MFA candidate Palace Bryant (played by artist Diamond Stingily) defending her thesis to four faculty members. Her defense comes at the end of a three-year programme, typically a time for celebrating and recapping accomplishments. Instead, Palace, who is one of only a handful of people of colour at a largely white college in upstate New York, is met with criticism and condescension. Her work, which we learn has already been exhibited at the Venice Biennale, is never acknowledged by the white faculty members ostensibly reviewing it. One even remarks: “There are lots of female artists your age and race making the same stuff you’re doing, how are you going to differentiate yourself?” This sets the tone for a movie that offers an alternately entertaining, uncomfortable and sharply satirical take on the art world.

Throughout the film—which opens today (16 September) in New York and 23 September in Los Angeles ahead of a nationwide release from Mubi—the people who are supposed to be mentoring and guiding Palace seem unsure how to engage with her and her work. Even her classmates appear completely out of touch, despite their apparently liberal attitudes. This dynamic further isolates Palace, bringing in a broader critique of gender, class, race, liberalism and how all of this is ultimately tethered to capitalism. Despite the timeliness of the issues at play, some scenes drag on, such as the lead-up to an all-night rager that Palace initially avoids but ultimately attends. Throughout the day, Palace takes various drugs including mushrooms and marijuana, and the night culminates with her doing Ketamine. The party scenes, which drag on, could have been condensed to focus more on what Palace does after—how she plans to approach the next chapter in life.

The rest of the film tracks the following 24 hours of Palace’s life and what she does in her remaining time with her cohort. Filled with academic references and conversations that often touch on the art world and art-making practice, Syms’s film tries to capture a larger experience of transition, burn-out and what happens when your next move is still unknown. For Palace, this seems to be a situation she both revels in and struggles with. But does not have the luxury of time to process her achievement. Now officially a Master of Fine Arts, Palace must return home to Chicago to care for her mother, who is dealing with the longer term effects of Lupus, a chronic autoimmune disorder.

Shot in an indie film style with funny and pointed dialogue, The African Desperate offers a very accurate account of the complicated and sometimes-convoluted elements of the art world, even if it is fictionalised. While the school is never named, with its small-town location and rigorous academic conversations (I counted three references to performance studies scholar Fred Moten in the film’s first ten minutes), it evokes a striking resemblance to Bard College’s renowned Center for Curatorial Studies, which Syms attended.

The film’s milieu feels all too familiar and topical in today’s art world and general cultural landscape. Peppered with GIFs, memes and videos within the film, it strikes a chord with the issues of the day on art school campuses and beyond. It also seems to be in formal dialogue with curator Legacy Russell’s argument articulated in her book Glitch Feminism: A Manifesto (2020). It both poses questions and makes observations about the inner mechanisms of the art world, how it is fueled by people’s lived experiences and more broadly what success looks like once an artist achieves a certain level of renown and has to figure out what’s next.

Sometimes terminal degrees result in relationships that only last as long as those academic experiences. The African Desperate captures the larger longing, loneliness and melconoly that are often associated with graduate school while also poignantly commenting on the current state of the art world.