Home News More Than Two-Dozen Ancient Buddhist Temples and Murals Have Been Found in... 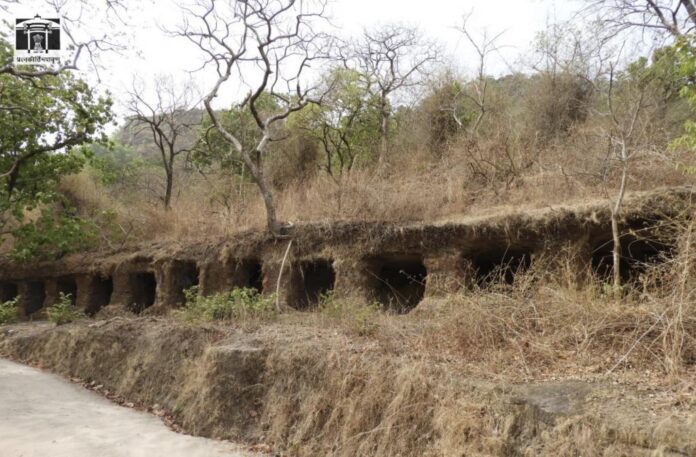 Two-dozen previously unrecorded Buddhist caves have been found in the Tala range of the Bandhavgarh Tiger Reserve, the Archaeological Survey of India reported last week.

“The time period of the findings covered the reigns of the kings Shri Bhimsena, Maharaja Pothasiri, Maharaja Bhattadeva,” the Archaeological Survey of India (ASI) wrote on Twitter. The caves have been traced to the Mahayana sect of Buddhism—and to the same milieu as the UNESCO-designated Ajanta caves in Aurangabad, according to Indian Express. ASI determined the temples are from the 9th to 11th century, and the water structures are from 2nd to 15th centuries C.E.

The month-long undertaking, led by archaeologist Shivakant Bajpai of Jabalpur Circle this past spring, marks the first government exploration into this patch of wilderness since 1938. That earlier endeavor focused on inscriptions, while this one focused on architecture. ASI has so far recorded a total of 35 temples, 76 caves, 50 inscriptions, and 56 sculptures across both studies, nearly a century apart.

Only two stupas (dome-shaped structures) have been found, including one from this latest round.

An ASI team covered nearly 170 sq km falling in the area of the Bandhavgarh Tiger Reserve over months-long exploration of the region which was undertook for the first time since 1938.

The exploration was conducted by the Jabalpur Circle of ASI. (3/3) pic.twitter.com/c3qD0qpzIu

In June, researchers from Ashoka University published findings from their own ground-level and GPS explorations into Bandhavgarh. “The archaeology of historical India has usually been perceived through the lens of cities and states, leaving forest tracts to a large extent unexamined,” their report in begins.

ASI’s team included archaeologists, analysts, and photographers, but also forest guards who kept watch while they surveyed the reserve’s principal area of 65 square miles. “Many times, we had to run away from the site due to [the] presence of wild animals,” Bajpai said, according to the Hindustan Times. Wild elephants were more likely to wreak havoc than tigers.

Bajpai cited one particularly large Varaha sculpture from the 9th to 13th centuries C.E. among the most meaningful finds. Measuring 20 feet tall and 15 feet wide, he said it might be “the world’s largest sculpture.” Votive stupas hailing from the 2nd and 3rd centuries C.E. “held the ashes of the monastic dead to be eternally in the presence of the Buddha Shakyamuni,” Bajpai added.

Next, ASI will explore the remaining Khitauli and Magadhi ranges of the Bandhavgarh forest. The total area of all three ranges is over 276 square miles.

The Earliest Words Ever Written in Basque Have Been Found Engraved on a 2,100-Year-Old Bronze Relic