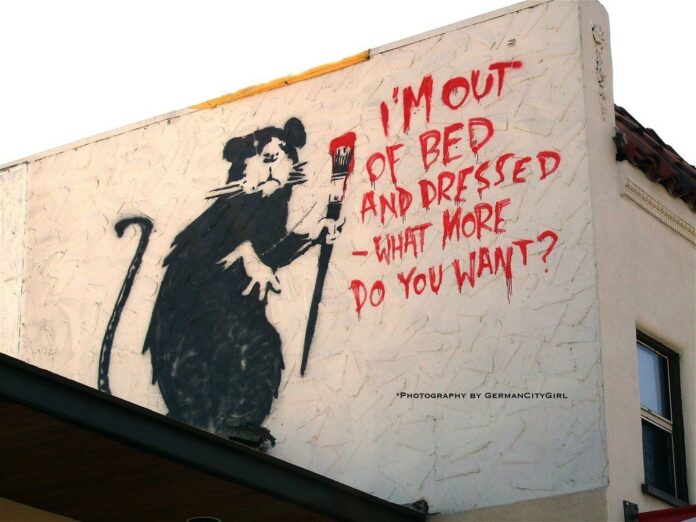 If you say that Banksy is an activist, a provocateur, an anti-capitalist, then you will be right. Probably even a child knows that Banksy is a mysterious street graffiti artist who has achieved worldwide fame.

He captivates the public with his ability to remain anonymous despite the countless murals he has painted in public spaces. Since the 90s, he has been painting walls around the world, but the secret of Banksy’s identity still remains unsolved.

The artist loves to put obstacles in the way of those who pretend to be detectives and try to shed light on the mystery of Banksy’s identity! But still, there are more or less reliable theories. We want to share them with our readers.

The coolest theory on Banksy’s identity

Thanks to an investigation by British journalist Craig Williams in September 2016, a version appeared according to which Banksy could be Robert Del Naja, leader of the Massive Attack! At first glance, the theory seems far-fetched, but this new identity of Banksy is actually plausible. Indeed, they are said to be friends, both from Bristol and born around the same time.

Another piece of evidence according to Craig Williams is the link between concert dates and new artwork. Just look at these incredible coincidences:

And what’s most interesting is that Robert Del Naja also has a history as a street artist dating back to the 1980s. Of course, no clue can be taken with certainty. But this supposed identity of Banksy further confirms his genius. A street art and music prodigy? This theory never ceases to amaze the imagination.

The most probable theory about Banksy’s identity

Also in 2016, thanks to a theory based on a long work on the study of geographic profiling, a new version appeared.

According to this version, Banksy could be Robin Gunningham, a native and current resident of Bristol. Born in this English city in 1973, he moved to London in the 2000s. This coincides with Banksy’s career path. At the moment, this theory is most likely regarding the identity of Banksy, the most popular graffiti artist of our century.

Among the many theories regarding identity of Banksy, there is another version that postulates a collective of artists, and not one person. And this version is quite plausible.

The most far-fetched theory

In September 2020, a tweet posted by “Scouseman” stunned the world. Could we determine Banksy’s identity? According to this version, the lucky winner was Neil Buchanan, host of the 1990s Disney Channel show Art Attack.

Buchanan taught on screen how to make art out of everyday objects and was a favorite with children. Despite the lack of conclusive evidence and immediate denials from Buchanan’s official website, fans liked this theory of Banksy’s identity.

This is certainly the least credible theory about Banksy’s true identity.

We can build an infinite number of versions with which others can agree or dispute. But most still will not argue that Banksy, whoever he is, created his own world. This is a world where the streets guard everyone, where the walls cover themes, who can express themselves, where they rise and wait, the townspeople painted them!

The Art Angle Podcast: What Can the Art World Learn From an Occult Practitioner?