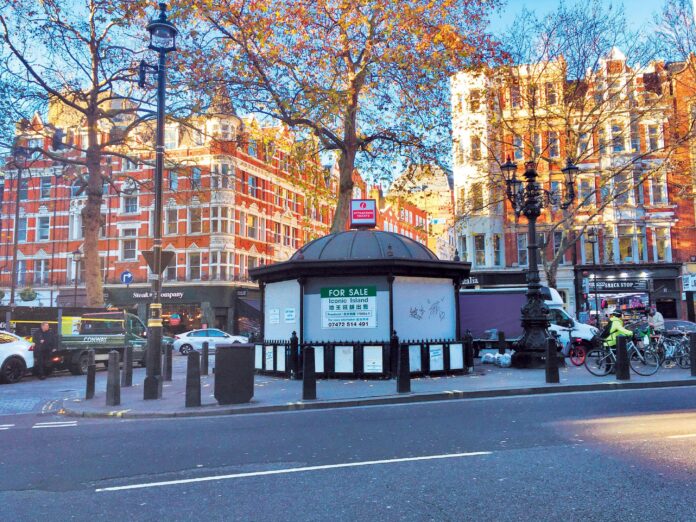 London’s National Portrait Gallery (NPG) has made a most unexpected acquisition: a ticket kiosk on a small traffic island just outside its new entrance. But it is the hidden space below street level that is important: a former underground Victorian public lavatory, which closed in the 1970s.

This unusual site will offer a unique opportunity to create what will in effect be a new NPG annexe. With a separate entrance, it could open longer hours than the gallery, attracting evening visitors from the West End’s entertainment quarter around Leicester Square.

Although the elegant hexagonal kiosk at the Trafalgar Square end of Charing Cross Road, at the junction with Irving Street, may look Edwardian, it dates from the 1980s and was used for selling theatre tickets. After closing a few years ago, it was put on the property market in 2021.

The Art Newspaper can report that several months ago the NPG succeeded in buying the “Iconic Island” from a property company, for a sum of roughly £3m, with funds provided by Len Blavatnik, the Ukrainian-born American British businessman.

The underground space is six times larger than the kiosk space, which provided an entrance for the triangular-shaped 1890s public lavatory below the street. Women at that time were treated dismally: the lavatory had 13 urinals and 12 male cubicles, with only five female cubicles.

Nicholas Cullinan, the NPG director, has ambitious ideas for this underground space. Subject to planning consent, the kiosk could be demolished and replaced with a new entrance to the space below ground. This large area, nearly 1,500 sq. ft, would then be completely refurbished, providing a venue for changing gallery displays and/or performance and film relating to portraiture. To take a theoretical example, it could be used to show a multi-screen film installation by Isaac Julien.

But progress on the kiosk project will have to await the opening of the refurbished main building, now scheduled for 23 June. An architectural competition would probably be launched for the new site, planning permission would be needed from Westminster Council and, finally, there would be the building work. All this would take several years. In the meantime, the NPG is exploring how the existing kiosk could be temporarily used next summer.

The refurbished National Portrait Gallery (NPG) will have a new main entrance as well, facing north just off Charing Cross Road. When its original building opened in 1896, the gallery’s major donor, William Alexander, had wanted the entrance to be on the east side, where it has been ever since. This will remain, but as an additional entrance.

Tradition has it that Alexander argued against a north entrance, since it would face Soho, then a den of iniquity, as well as the slums around Seven Dials. The NPG was built on the site of a former workhouse and the street where the new entrance is being completed is named on a 1682 map as Dirty Lane.

The area around the new north entrance will soon be very different, creating an enhanced public space halfway between the east sides of Trafalgar Square and Leicester Square. It is to be named Ross Place, acknowledging the £4m donation by David Ross, the co-founder of Carphone Warehouse and the current NPG chairperson.

The new entrance is just one part of a refurbishment of the entire NPG building, which closed to visitors in March 2020. Led by Jamie Fobert Architects, the building work is nearing completion and internal redecoration of the galleries is now under way. Rehanging the collection will be a massive operation, since there will be more than 1,000 works in 34 rooms.

At an early stage of fundraising, the National Lottery Heritage Fund pledged £9.4m, an encouragement to private philanthropists. The NPG has now raised over £44m for the project, significantly more than its original £35.5m target. Surpassing the target means that it will be possible to kickstart a further development phase, including the conversion of the former ticket kiosk.

The principal donor is Blavatnik, whose family foundation provided £10m, making it the largest private donation ever received by the NPG. This will be mainly used for the refurbishment of the first floor of the 1896 building, with nine galleries. The Blavatnik Wing will continue to be used for 1840-1945 portraits. Blavatnik is a great admirer of Benjamin Disraeli, the prime minister in 1868 and 1874-80, and this may well have encouraged him to contribute towards a gallery that will celebrate a wide range of Victorian statesmen, writers, scientists and others.

The East Wing, a space once owned by the adjacent National Gallery, had been converted into a warren of offices in the 1980s. The freehold of the wing was then bought by the NPG in 2018 for £2.6m. This area is now being converted into gallery space, funded with £6.5m from the Garfield Weston Foundation. It will house part of the gallery’s collection of contemporary portraits. The Clore Duffield Foundation is a funder of the new learning centre.

One early donation that fell through was from the Sackler Trust, which had promised £1m. In 2019 the NPG and the trust announced their joint agreement not to proceed with the grant, following worldwide protests over the involvement of some members of the Sackler family with the addictive drug OxyContin, which resulted in thousands of deaths.

The historic galleries, for portraits from the Tudors up until around 1840, will be on the upper floor, above the Blavatnik Wing. The walls of these rooms have been newly covered with fabrics, many in bold reds, blues and greens. Although these colours may come as a surprise, the NPG director Nicholas Cullinan feels that they are appropriate for historic portraits.

Many of the later 20th- and 21st-century portraits will be on the ground floor, where the walls will be mainly white. Shutters installed in the 1990s have been removed to make these spaces much lighter. Interspersed throughout the building will be four “Making” rooms, focusing on particular subjects: Tudor portraits, miniatures, prints and photography.

Before the closure, the NPG received around 1.7 million visitors. Obviously, Covid-19 has hit attendance figures at virtually all museums, particularly those in central London, which are dependent on international tourism. But Cullinan hopes that once the pandemic is safely out of the way, the numbers will hit two million.

And how will the visitor experience change? Cullinan responds: “Come and see: this is the largest redevelopment in our history. There is no point in closing and for visitors to then say, ‘It’s the same’.”

“Getting It Together In the Country” is on view through May 8 at Hauser and Wirth Somerset.