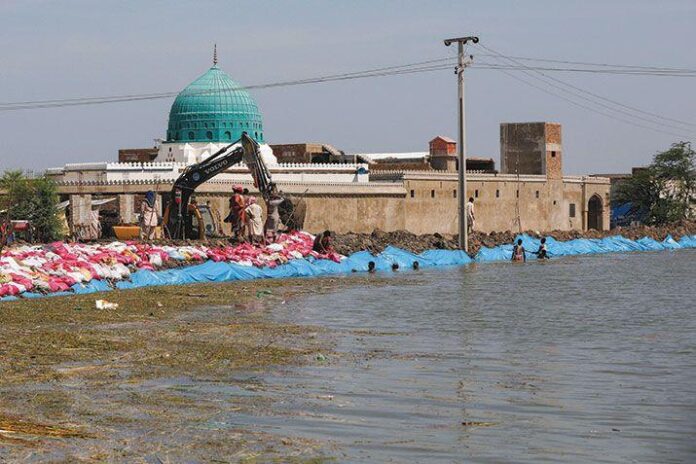 Heritage sites in Pakistan have been severely damaged following the record monsoon rains and flash floods that have deluged the country since June. The flooding, a climate-induced disaster according to some commentators, has devastated the country, leading to the loss of 1,400 lives and the displacement of more than 33 million people.

Unesco reports that its World Heritage sites at Moenjodaro, located in the southeastern Indus River Valley around 310 miles from Karachi, and at Thatta, home to the Makli necropolis, were damaged by the floods. Karez in Balochistan, a site with one of the oldest gravity irrigation systems in the world, was also affected by the deluge; this area is currently on Unesco’s “tentative” list of areas suitable for inscription on the World Heritage list. The Amri site museum and the Sehwan folk and craft museum, both located in the Jamshoro district, have also been damaged.

There are concerns about whether the damaged sites will be fully restored, says Shaheera Pesnani, a UK-based specialist in heritage conservation who is closely monitoring the situation in Pakistan. “Heritage conservation has unfortunately fallen short of the priority that it deserves in Pakistan,” she says. “With the onset of unprecedented flooding, and considering the climate crisis, most probably a recurring phenomenon in the future, the question is, will heritage surface in Pakistan’s national consciousness as worthy of protection, or will it be left to crumble away and fall into oblivion?”

She also highlights that it is not just the built heritage that is under threat. The population displacement and uprooting of livelihood has endangered intangible heritage, such as the art of Ajrak printing. This ancient technique of block printing that is exclusively made in the southeastern province of Sindh is also at risk following the natural disaster, says Pesnani.

Meanwhile, Shabbir Kazmi, a US-based architect, says: “The catastrophic floods and extent of damage is ongoing over large areas of agriculture, roads, cities and historic monuments. The historic sites and monuments get little attention and funding support during the dry seasons from the Pakistani government. Recent catastrophes may just simply destroy and erase these monuments of civilisation forever.” The Pakistan High Commission in London did not respond to a request for comment.

Unesco has pledged $350,000 to help safeguard sites in Pakistan including Moenjodaro. This comprises $150,000 from its World Heritage Fund to support recovery and prevention measures at Moenjodaro and Thatta; and $200,000 from its Heritage Emergency Fund for “cultural heritage, cultural practices and intangible heritage elements at risk in the Balochistan, Swat and Larkana districts”.

The precarity of Moenjodaro

The Unesco website outlines that Moenjodaro was built entirely with unbaked brick in the third millennium BC. “The acropolis, set on high embankments, the ramparts, and the lower town, which is laid out according to strict rules, provide evidence of an early system of town planning,” the statement adds.

“Unfortunately we witnessed… mass destruction at the Moenjodaro site,” says a letter from the Cultural, Tourism, & Antiquities Department of Singh state sent to Unesco, signed by curator Ihsan Ali Abbasi and architect Naveed Ahmed Sangah. “The original structure is safe by and large, including the [Buddhist] stupa at the site. However, the protective layer, also called mud slurry, that we deployed suffered a lot of damage, causing exposure of the original walls,” Abdul Fatah Shaikh, the director of archaeology and museums for the provincial government, told Al Jazeera.

“Many parts of the site are now exposed to nature and we must work extremely hard and very urgently for conservation within the next six months. It cannot be ruled out that if we fail to deliver, the site could be added to the [Unesco] danger list,” he said.

Archaeologist Asma Ibrahim, the director of the State Bank Museum in Karachi, says that a sacrificial layer made of mud slurry was mainly damaged at Moenjodaro. “The original structure is hopefully intact which is under [new] bricks and mud slurry,” she says. A long-term preservation strategy for the site should involve making water channels with fire bricks. “The areas which are highly damaged should be buried and the weak structures and walls should be covered from the top,” she adds.

“A research cell should be established at Moenjodaro for scientific analysis with the help of new technologies in the field of archaeology and the other science subjects which are very much part of archaeological studies. In Pakistan we have no such research institutions,” Ibrahim says.

The Pakistan branch of the International Council of Museums (Icomos) and the Icomos International Scientific Committee on Risk Preparedness have meanwhile set up a joint task team, which will work on “identifying impacted cultural heritage and assessing damage”, says a spokesperson.

“The area and number of sites involved are vast; priorities will have to be set and financial and logistical assistance sought,” she adds. Icomos Pakistan is ready to proceed with a rapid damage assessment and is currently mobilising logistical support. All updates will be posted online.