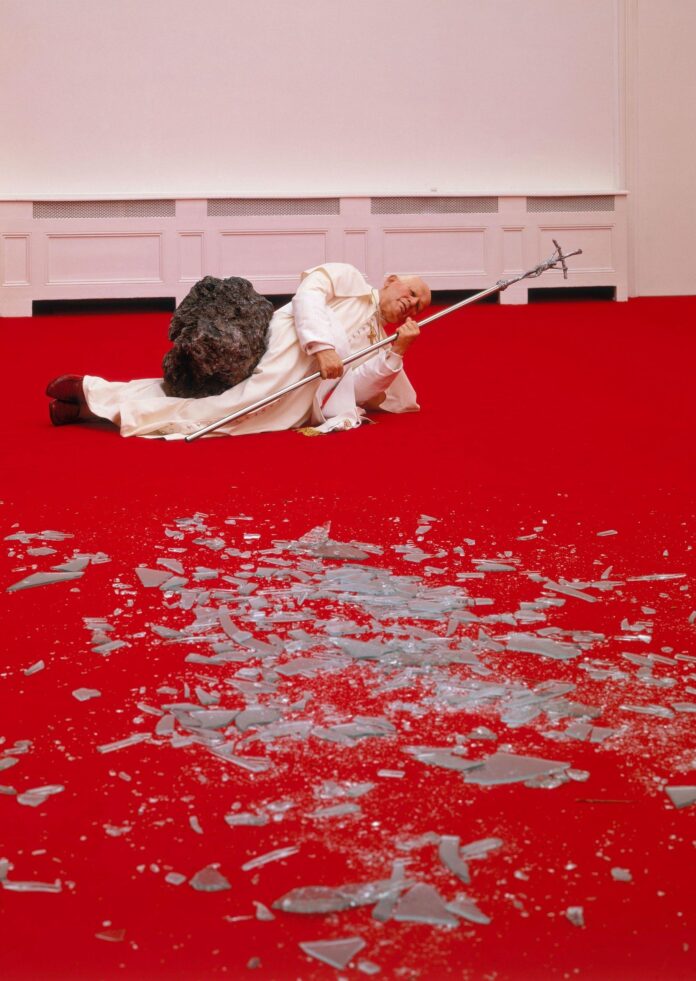 Who is the author of a work of art? The artist who conceives it or the artisan who makes it? In France, a country where the droit d’auteur is considered sacrosanct, a Parisian court has been called on to answer the question.

Friday (8 July), the court rejected a claim by Daniel Druet seeking to be considered the “sole author“ of eight sculptures he made in wax, polyester resin and fibreglass between 1999 and 2006 for the artist Maurizio Cattelan. Druet had also asked for €6m in compensation. The three judges deemed him a subcontractor, fulfilling a commission from an artist who was the unique conceiver and therefore owner of the work.

“The works were always presented under Cattelan’s name. Only he was taking care of their staging,” a task that Druet “was unable to perform”, the court ruled.

Druet has the possibility to appeal the court’s decision.

Druet was employed for decades to make the wax figures of celebrities for the Musée Grévin, the Parisian equivalent of Madame Tussauds. Cattelan’s French dealer Emmanuel Perrotin was impressed by Druet’s effigy of Pope John Paul II at Grévin. Maurizio Cattelan asked him to make a statue of the pontiff, and in 1999 the Italian artist and provocateur made a big impression with La Nona Ora (The Ninth Hour), a sculptural installation showing the pope laying on the ground, having seemingly been struck by a meteorite. Druet then received a series of commissions from the conceptual artist, including an unsettling statue of a kneeling boy who appeared to be a young Adolf Hitler (Him, 2001).

The working relationship between Druet and Cattelan became tense when the French sculptor raised the costs for restorations of Cattelan’s works to rates Perrotin considered “exorbitant”. The parties ceased working together and Cattelan commissioned other artisans to make his statues, including one version of La Nona Ora.

The case, which also implicated Perrotin, was closely followed because of its potentially enormous implications for all artists who rely on collaborators to execute their works in part or in whole. It comes at a time when some artists have increasingly acknowledged the work of fabricators and collaborators on their works in catalogues or on exhibition labels.

At a hearing on 13 May, media crews were so numerous the court had to move to a larger room at the last minute. Cattelan did not show up. Druet claimed he had received only “vague indications” from Cattelan and was free to put his personal touch on the figures. “He is unique, he was not a simple executor, he has some artistic magic,” said Druet’s lawyer, Jean-Baptiste Bourgeois, noting that “Cattelan himself admits that he can’t draw, paint or sculpt”. In their decision Friday afternoon, the judges countered that Druet had received precise indications on the appearance and measurements of the works, sometimes down to the millimetre.

Perrotin Gallery’s lawyer Pierre-Olivier Sur insisted that the staging—including setting the figure of the pope on the floor, cutting its legs, pinning it under a stone and shattering a glass canopy over it—was all Cattelan’s work.

“The fabrication of the work is secondary to the conception,” said Cattelan’s lawyer, Eric Andrieu. For Sur, protecting the “intellectual property” of an artist is all the more significant in the era of “conceptual art”, when some artists imagine their works but do not fabricate the objects themselves.

Even so, the situation is not new. Auguste Rodin never carved a block of marble himself, instead tasking other sculptors to execute his designs. No one has ever challenged that the resulting works are not by Rodin.