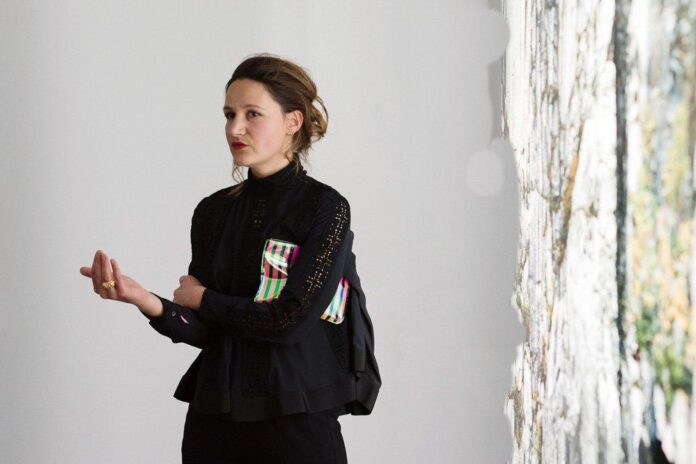 The French artist Noémie Goudal is an illusionist. But unlike a magician pulling a rabbit out of a hat, Goudal provides the viewer with enough clues to understand her creative process. Her photographs and videos of palm trees and burning vegetation derive from the creation of printed décor, like stage sets, which clearly differentiates her art from the work of a documentary photographer.

Several images on the stand of Galerie Les Filles du Calvaire at Paris Photo in the Grand Palais Éphémère this past weekend, conveyed Goudal’s preoccupations with nature and her working method.

For  (2021), Goudal erected jagged pieces of cardboard in front of a partially snow-capped landscape. In order not to deceive the viewer about her intervention, she left the edges of the cardboard visible in the ensuing work.

For Phoenix V (2021), she sliced her own photographs of a palm tree into vertical and horizontal strips, which she installed in the same landscape in order to make another picture. The overlapping layers of strips conjure a deconstructed image. Black spaces in between the branches and the artificial light illuminating some of the leaves denote how the original conditions were nocturnal. Meanwhile, the visibility of the clips and cables communicates the work’s artifice. 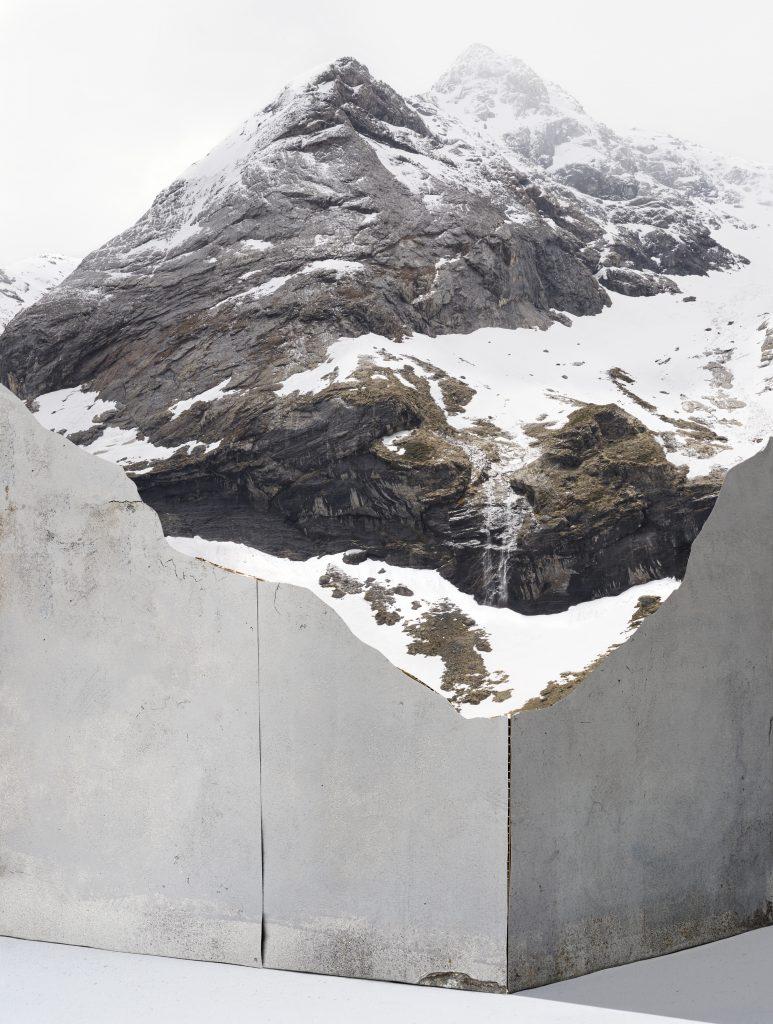 “What I try to instill in the image is all the artisanal side, so you can find the gesture of fabricating the image within the image itself,” Goudal told Artnet News. “For me, it’s very important to involve the viewer so that they can live a bit of the [image-making] experience.”

To capture the palm trees, Goudal and her team of assistants drove to southern Spain, taking along equipment like cameras, computers, a printer and lighting. “We made a kind of deconstruction of the landscape and the result of this performance is represented in the photos,” she said.

Born in Paris, Goudal, 38, studied graphic design at Central Saint Martins in London before attaining a MA in Photography from the Royal College of Art. “There’s better and more varied teaching in England; the schools have a good reputation and the students are very free,” Goudal said about her decision to study abroad.

From the beginning of her practice, Goudal has been interested in the hovering interface between fictional images and reality. To make her early works, she would install a photograph of a landscape somewhere very different—such as capturing a print of a misty, tropical road inside a dusty barn.

In the last few years, Goudal’s work has become increasingly ambitious in scale and media. She has had exhibitions at the Photographer’s Gallery in London, the Finnish Museum of Photography, and Foam Photography Museum in Amsterdam, among other venues. Notably, her works have entered the collections of the Centre Pompidou, the CNAP – France’s visual arts collection, and Germany’s Fotomuseum Winterthur. 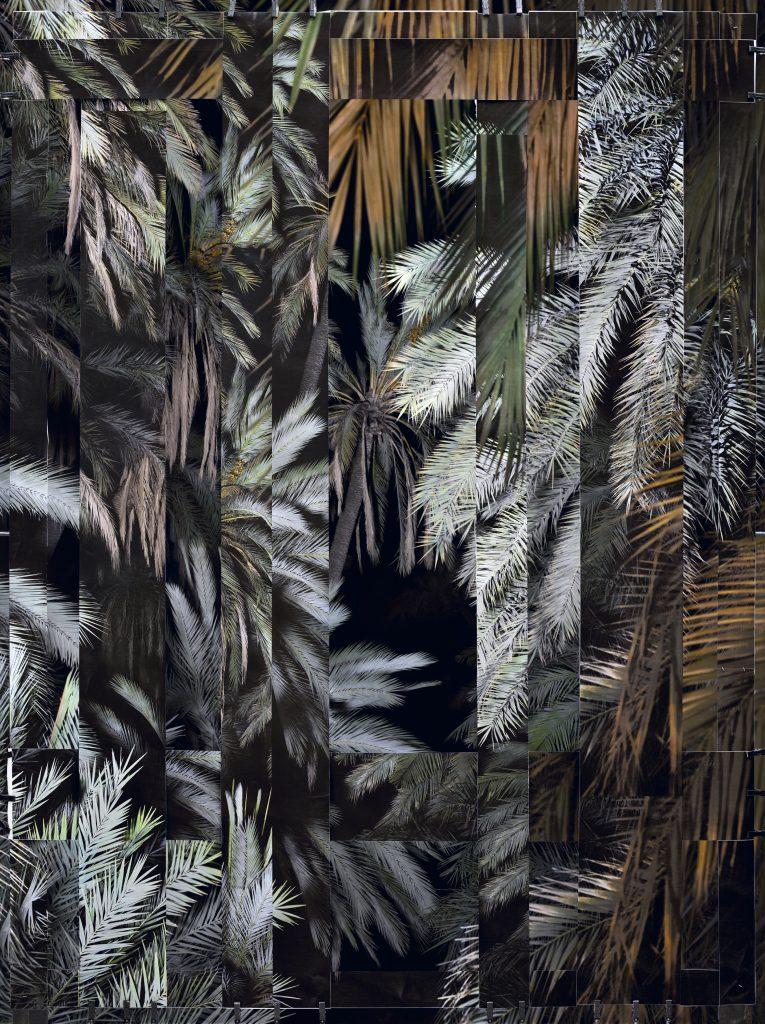 As part of this summer’s Rencontres d’Arles photography festival in the south of France, Goudal had an exhibition, “Phoenix,” in a deconsecrated gothic church called Église des Trinitaires. On view in the chapel’s nave were two captivating videos evincing her fascination with representation, installation, and performance.

Inhale Exhale (2021) opens with a verdant, tropical landscape, like a postcard cliché. But the palm trees are soon revealed to be printed on placards, which begin to emerge and move, eventually collapsing in the rain. Then an identically constructed jungle appears, only to meet the same drowned fate. The piece was filmed in the wood of Vincennes, near Paris, wherein the décor was placed.

The second video, Below the Deep South, (2021), is more terrifying, showing lush vegetation being set ablaze. The edges of the sheets of images lick with flames, burn and vanish. Then another, and yet another, layer of images catches fire in a perpetual cycle of repetition and destruction. Eventually, the ravaging flames stop flickering and embers amass on the floor of an industrial site. This ‘making of’ ending indicates that this is where the sheets of images were installed. Clarity is given to the mastered fakery, the poetic illusion is rendered comprehensible.

One immediately wonders if the dystopian vision is a reflection on the fires in the Amazon rainforest during Jair Bolsonaro’s presidency of Brazil. But Goudal replied that this was not the starting point. Rather, it was researching deep time and paleoclimatology, the study of the climate history of the earth and how a better understanding of the earth’s climate in the past relates to its present and future climate. 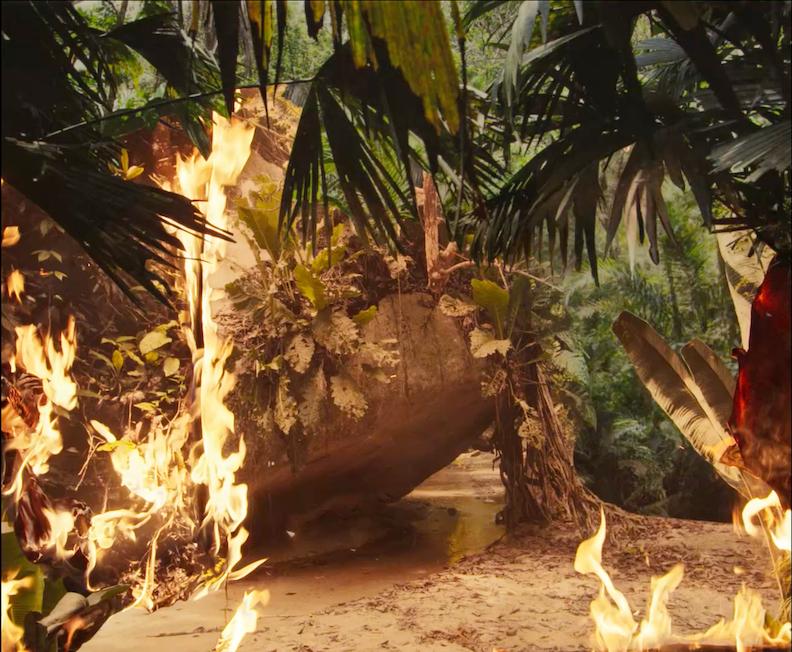 Noémie Goudal. Film still from Below the Deep South (2021). Courtesy of Les Filles du Calvaire gallery and the artist.

“What interests me through these videos is trying to see the metamorphoses of the earth in a much broader sense than during man’s era, and looking at the destruction of fire but also at how it is a very important force of energy,” Goudal said. “When we speak to paleoclimatologists, we realize to what extent the earth was subjected to metamorphoses, like blasts and volcanoes, which allowed man to exist, and it’s this balance that we’re trying to save now.”

It is this transversal quality of Goudal’s practice—working across techniques and media, and exploring the earth’s different geological epochs—that makes it distinguishing, according to Stéphane Magnan, co-founder of Galeries Les Filles du Calvaire. The gallery sells her photographs, in an edition of five, priced between  €18,500 and €28,000 ($18,330-$27,740), depending on the format. Videos, also in an edition of five, are priced at €20,000 ($19,810).

“This artist proposes a very subtle work that destabilizes the viewer by deconstructing the landscape,” Magnan said. “This very particular, offbeat vision triggers fundamental issues about the earth’s transformation and proposes an aesthetic recomposition of our world.”

The theme of destruction is treated slightly differently in the black-and-white video, Untitled (Study on Matters and Fire), 2022. Commissioned for the group exhibition, “L’horizon des événements,” at Château d’Oiron in western France this summer, it shows a bleak, actual wasteland located beyond the periphery of Paris.

One quickly perceives that the austere image is a composition of different elements, centered by a large circle whose edges become aflame. As the billowing, blackened paper tumbles, the fire devours the landscape. Through a system of photographic anamorphosis, the destruction gives way to the real, unravaged landscape behind. 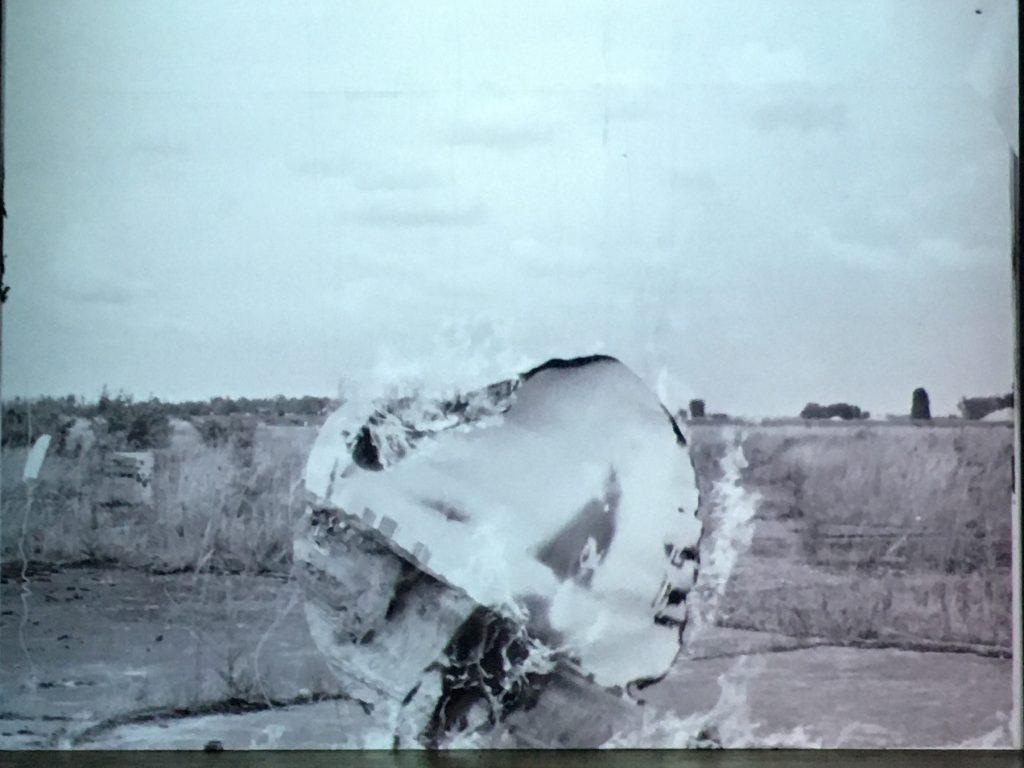 “The contract with Jean-Luc Meslet, director of the Château d’Oiron, was to produce works in situ, in or near the château, and we looked with Noémie for a forest that could be filmed in May but this turned out to be impossible so we couldn’t respect this contractual clause,” the exhibition’s curator Patrice Joly explained. “I find this new film even more powerful – it totally finds its place in the château’s grandiose setting, the sound fills the large room under the eaves […] and makes us feel the power and magnetism of fire – it’s a magnificent piece.”

Goudal, who cites Christopher Williams, Wolfgang Tillmans, Andreas Gursky and Zoe Leonard as references, has also ventured into interdisciplinary projects. At the Festival d’Avignon, south of France, this summer, she collaborated with stage director Maëlle Poésy on a performance piece, Anima. Next to a landscape-metamorphosis video, a dancer performed on a metallic, gridded structure of the same dimensions as the video screen.

Goudal has also made a foray into sculpture. At her exhibition, “Post Atlantica,” at Edel Assanti in London earlier this year, several spherical, kinetic sculptures were on display alongside photographs and videos.

Indeed, Goudal aspires for her conceptual work to defy classification and be appreciated beyond the confines of photography. “It’s still complicated to show photographic work in a contemporary art context,” Goudal lamented. “As there are fairs dedicated to photography, a gallery will think of showing their trending photographer at Paris Photo rather than at Paris+ [par Art Basel]. I understand but it’s just classifying [artists who work with photography] even more. I suffer a lot from this.”

Besides, Goudal is hardly a photographer in the traditional sense. “Photographers who make documentary and more classical work don’t see mine as classical photography,” Goudal added.

Certainly, what drives Goudal is developing a multifarious practice, rich in intellectual exploration. “It’s very natural for me to use all these different media,” she said. “What interests me is studying the image from lots of different viewpoints and, above all, the experience of creating the image.”