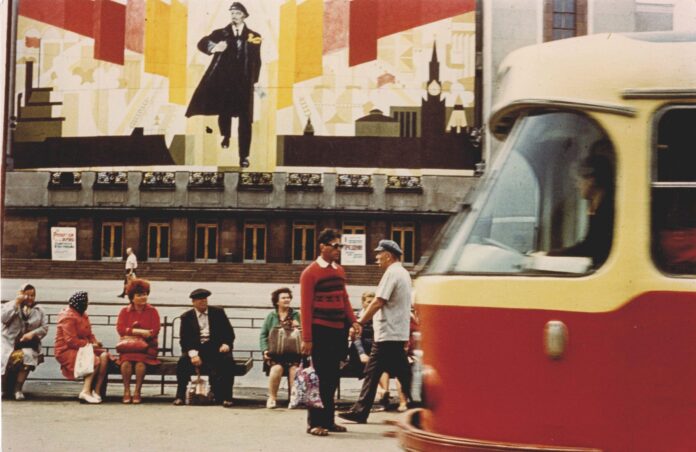 Boris Andreevich Mikhailov was born on 25 August 1938 in Kharkiv, Ukraine, to a Ukrainian father and a Ukrainian-Jewish mother. He grew up in the years after the Holodomor, Stalin’s so-called “terror-famine” which killed millions of Ukrainians. One of Mikhailov’s earliest memories is of leaving his father to take one of the last freight trains out of Kharkiv with his mother before German troops invaded in October 1941. A few months later, some 15,000 Jews from Kharkiv were rounded up, marched to the Drobitsky Yar ravine and shot.

Mikhailov grew up often beset with anxiety, a feeling that “the world could come to an end at any moment”, he says. At 18, he enrolled at a military academy. Unable to come to terms with the military culture, he left to train as an engineer, eventually finding work at a factory making electrical components for spacecraft. The factory had a photographic darkroom, which Mikhailov, over the course of the next decade, would illicitly use to process images he had taken privately. In 1968, his life changed when, after a tip-off, the KGB raided the factory darkroom, finding photographs Mikhailov had taken of his wife in the nude. He was interrogated, his apartment ransacked, his work confiscated and destroyed. He was accused of pornography and sacked from his job. The event convinced him to pursue photography full-time.

Today, Mikhailov is Ukraine’s most celebrated photographer. As the war with Russia continues, a unifying retrospective of his long career, titled Boris Mikhailov: Ukrainian Diary, will open this month at the Maison Européenne de la Photographie in Paris.

The Art Newspaper: Seeing your home country and city under such brutal attack each day must be a traumatic experience. How, if at all, have you learnt to cope with this appalling event?

Boris Mikhailov: They say a man can get used to anything. A house collapses and a new one is built in its place. But it is impossible to rebuild broken, destroyed lives. I cannot forgive this treacherous attack on my country. I cannot get used to this war—the sight of poor people being torn apart.

You photographed the protesters in Maidan Square, Kyiv, in 2013. That body of work was exhibited at the State Hermitage Museum in Russia in 2014. If I told the Boris who was photographing in Maidan Square in 2013 of the events of 2022, would he have responded with surprise?

It is true that, historically, it is often the case that countries close to each other are at war. It is difficult for young states and especially for states with a shared history. Political and cultural tension has always been present, all the time, ever since the collapse of the Soviet Union and the establishment of an independent Ukraine. The prospect of a Russian invasion was felt keenly in Maidan Square, even though it was impossible to think about it then. Ukraine and Russia have shared memories, a shared history. But the absurdity and perfidy of the attack has severed those ties, the ones that exist now and might exist in the future. Everything has been ripped away, and I don’t think we will be able to recreate those ties for a very long time.

When was the last time you were in Ukraine?

It was October of last year. Unfortunately, I didn’t stay long. I rarely travel because of illness. But Kyiv was full of young, energetic life. It looked like a European capital. I believe it will continue to be the capital of a free country that has chosen its independent path.

For someone who has never set foot in Kharkiv, how would you describe your city?

Kharkiv has always felt prestigious to me, for it was the first capital of Ukraine. The city is the logistical hub between the East and the North and the South and the West. The way it looks, its unique history; for me it represents the birth of modern culture. Kharkiv made me the photographer I am. It formed the arc of my life. And now, at age 83, I have a sense of confidence—a feeling that I have been useful to it, even if just a little.

What are your most treasured memories of Kharkiv?

As I watch my city suffer, sometimes I only feel pain. But at times my mind is full of memory for the city of my past. Sometimes I feel filled with fond memories. The friendships I had. The warmth of my parents. The pride the city gave its people. These things were instilled in me from birth. I am grateful for everything it gave me.

You’ve often said that photography was “my way out”. What do you mean?

You lost your job in a factory when you were caught using the darkroom to develop nude photographs. Tell me about your life before photography. What kind of man were you?

Life before the camera now feels like a kind of preparation. My friendships, my schooling, my job before photography, even things like playing basketball, going swimming, all formed who I am with a camera. You have to have confidence in your chosen path, to know you are walking the right line. That confidence lies in the quality of your creativity. That will always be the case.

You’ve spoken about witnessing, in the 1950s, a group of young people from Kharkiv going to prison on pornography charges, as well as the crime of adopting “Western poses”, after they photographed each other on the beach. You lived under surveillance and censorship for much of your early life. How did this affect the work you created then, and create now?

The event stirred the town for a long time. Unwanted people in the Soviet Union were often tried for pornography, or were declared insane. In Kharkiv, a group of young people were accused of pornography and debauchery. The photographs they had taken were used as evidence for the prosecution. They were homemade images, private and naive. Many years later, in the early 1990s, I became acquainted with one of the participants. He showed me his court case file and I saw the photographs. They were still marked by the court, but all I saw was life, youth and joy. It’s hard to believe now, but at that time and place, photography was impossible. But each era, we must remember, puts its own demands on photographers and photography.

You must have often felt in danger when creating your work.

At the beginning, everything seemed frightening. It was frightening to do something wrong: to take a picture in the wrong way, to develop it the wrong way, to print a photograph the wrong way. But the main danger was on the street. If you were just taking pictures on the street, someone would call the police: “What photographs are you taking? Why are you taking the pictures?” There was a very strong spy mania at the time. There was a great distrust of people who were doing anything different.

Aron Morel, your publisher in London, has called you a “true subversive”. I wonder if you accept this? Is it possible to remain subversive in today’s liberal artistic culture?

I have always tried to create images, even when it was mentally and physically difficult. To do so, I had to break habits and patterns of working. Perhaps at times I thought I might had have a chance of being a subversive. But all I was trying to do was strive for truth, whilst trying not to do harm.

In your series Case History, you photographed the most vulnerable people in Kharkiv, many of whom were homeless. You have spoken of the need to always find empathy and respect in the process of image-making. You will be aware of intense conversations in photography and photojournalism around the ethics of consent. Where do you stand on this debate?

I was as open as I could be for that project. I involved the participants in the process of creating those photographs. A photographer, I think, should always draw the public’s attention to a problem. But I also believe a photographer should seek ways to somehow bring those problems to resolution.

What art excites you the most right now?

I am more and more attracted to philosophy. To me, it seems best placed to provide me with an explanation for what I should do, what I should look for to fit with today’s times.

Do you expect to ever return to Kharkiv, and photograph it?

Yes. My home is there. I hope that my waiting will not be in vain. Something, I hope, will fall in my lap, as it has done before.

What is your message to the many progressive Russian people who are privately against Putin’s regime and the war in Ukraine?

It is difficult to give advice in wartime. Everyone has to make a decision for himself. But it is possible to get up and go to work, as they did in Soviet times.