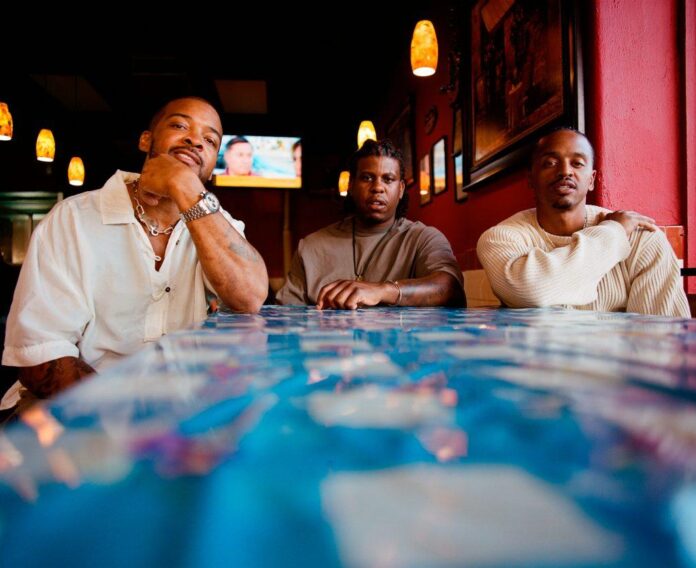 In your work documenting and developing artists, how do you see Ghetto Gastro operating in and around the food space?

I see Ghetto Gastro in relation to how, in the contemporary art world, we think about relational art or relational aesthetics, and this participatory action where things exist as they are created.

While rooted in the Bronx, my sense of Ghetto Gastro is that they’re all over. That it is global, that wherever it lands, it is bringing where it’s from with it, but it’s also responding to wherever it is. So perhaps highly twenty-first-century in that way.

What’s important about that is, from my perspective as a curator, thinking about visual art by artists of African descent, this idea of geographies is critical to understanding past, present, and potential futures as they relate to aesthetic innovation that marks our culture. 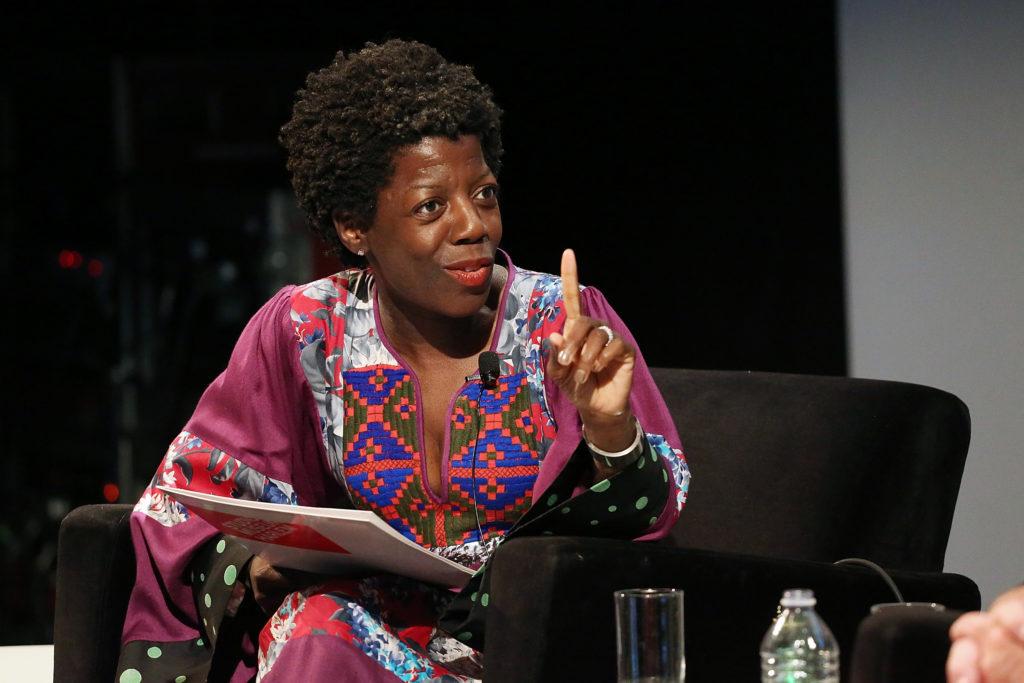 Are there artists or periods that come to mind when you think about that cyclical nature of telling our own stories?

There are lines that can be drawn between different periods and ideas. Rooting in community definitely speaks to political and cultural ideals of the 1960s. In the moment that StudioMuseum was founded, 1968 in Harlem was a big year—the Dance Theatre of Harlem and the National Black Theatre were also founded. Then just one year later, El Museo del Barrio in East Harlem. Many of our organizations come in that sixties period. They use “museum” in our name. So that was consciously looking at the museum field as a whole but also creating something totally new. That’s where Ghetto Gastro is in the culinary space: looking at the field, acknowledging it, having reverence for its traditions while reimagining them, reinventing them, remaking them.

I do see ideas of Ghetto Gastro being aligned to efforts visual artists have been making to create institutions. Projects like Theaster Gates’s Rebuild Foundation or Art + Practice, which is Mark Bradford’s organization in Los Angeles, or what Rick Lowe created with Project Row Houses in Houston, and many others. There are people like Vanessa German and Julie Mehretu, visual artists who have seen what it means to create space, often in places where the intersection between art and community is strong and can be an avenue, a lever, to create greater access to democracy.

I know you all have lots of relationships to artists as individuals, but I want to draw the line between the larger effort that others have made and will make. I’d love to speak to the culinary aspect and where that lives and sits within this larger space of creativity, from a perspective of the culinary as a creative pursuit and whether that creativity comes out of necessity.

When we think about Black culinary history, we understand that a lot of the creativity came out of necessity. But we can also see culinary as it relates to creativity, and that creativity being away in which the self is expressed. Think about the home cooks. Those people who cooked for us in the domestic sphere who expressed their brilliant creativity through the culinary. 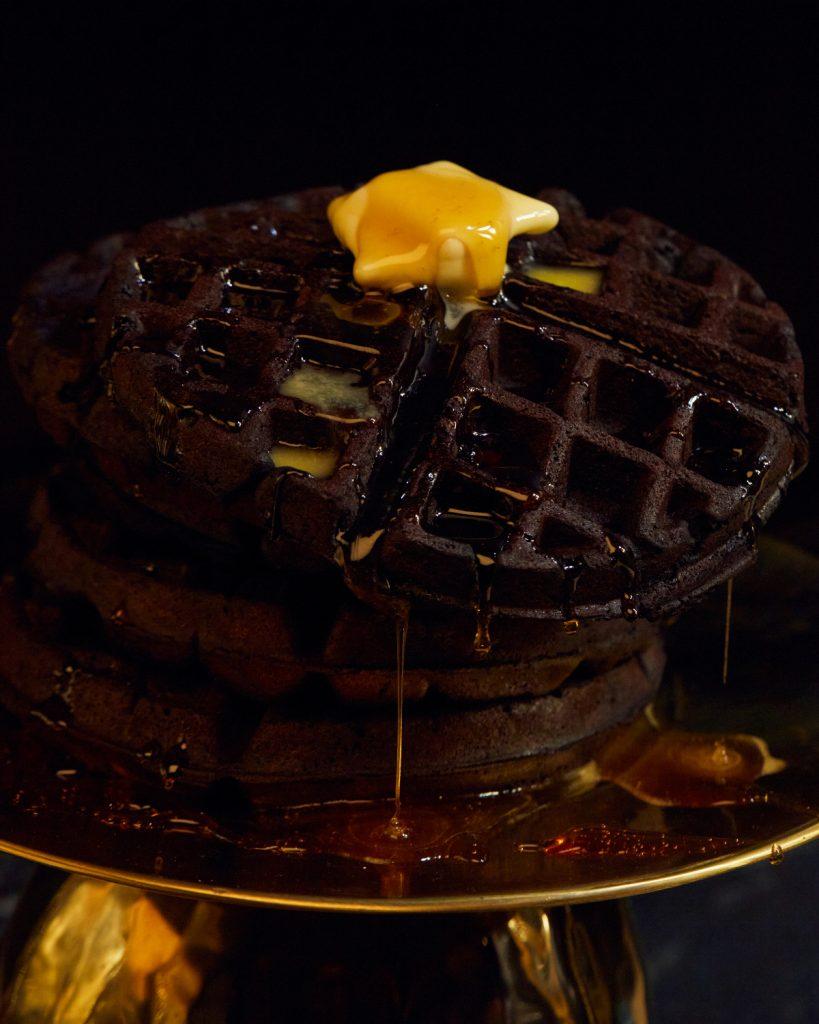 That’s a great point, especially because the creativity as self-expression, as a kind of playfulness, can be a point of departure for some. But we deserve that too, right? We have this history of struggle and necessity, survival. But there’s also always been a space to create levity and be celebratory, to do things just because.

Yes. What’s important about a project like Ghetto Gastro is that it ties deeply to the way in which food in and of itself is a way that we create community. The ways in which we engage in community. In the idea of food culture, to eat is a way to understand culture at large, which is how I feel about art.

I often say to young people, you can travel all over the world looking at art. Like, when I’m engaging with our young folks Uptown, I say, go to the museums all around the city, and through that experience, you experience aspects of all these different cultures, past and present, through art. Food offers very much the same experience.

When we talk about where we are in our culture, and all the ways that we can talk about what comes from the disconnection between people, food culture is one of those ways that we can re-­create and reinvent. I have always been aware of how much people’s own personal stories one can narrate through food. When you narrate through food in that way, it becomes a way to understand someone’s life—where they’ve been, where they lived, who they are.

Exactly. She worked a little bit on the Upper West Side, but her families were mostly in the South Bronx. So much of the food that I grew up eating was food that she learned to cook in those kitchens, to cook for the families she worked for. Some of the names of the things were wrong because they came through her Jamaican. It was only years later that I’d be like, Oh, that’s what that was.

Maybe that’s something that Ghetto Gastro is giving back to folks. It’s letting them claim their stories and themselves because by engaging in this community, in the culinary, you’re allowing others to claim a relationship to their individual journey, their family history.

What Is This, Velvet? 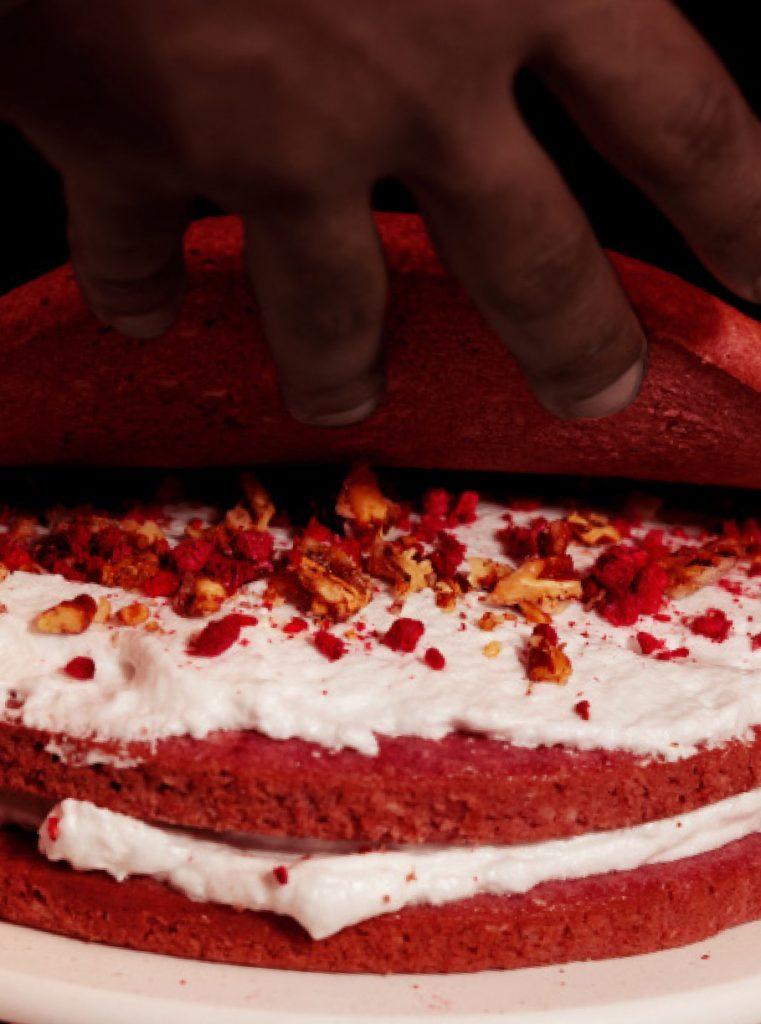 You can find red velvet cake in most Black neighborhoods, especially in Harlem. It’s often a capstone to celebratory Juneteenth meals, as are many red foods (red drink, watermelon, hot links) that symbolize Black people’s sacrifice and enduring quest for freedom.

While historians of Black foodways haven’t traced the origins of the dish to Black people, we grew up seeing and aspiring to have red velvet cake all the time. As a kid, Jon tried to avoid going to church on Sundays, but if a trip to Amy Ruth’s on 116th was on the agenda, he was gonna pull up for that red slice. Their version tasted homemade, was super moist and not too sweet, with beautiful pecans along the icing. Our version gets its color from freeze—dried raspberries, which you’ll find in the dried fruit section of the grocery store. Crush them into a fine powder using a mortar and pestle to give your cake its vivid hue

Heat the oven to 350°F (175°C). Line three 9-inch (23 cm) round cake pans with rounds of parchment paper cut to fit and grease with nonstick spray (or you can use just enough melted butter to coat the bottom and sides).

In a large bowl, whisk together the cane sugar, flour, raspberries, salt, baking soda, and baking powder, then sift the mixture into another bowl and set aside.

In the bowl of a stand mixer fitted with the paddle attachment, combine the grapeseed oil, buttermilk, lemon juice, eggs, and vanilla. Mix on low speed until you get a homogeneous liquid, 2 to 3 minutes. With the mixer running on low, add the dry ingredients, one large spoonful at a time, and mix until just combined; do not over mix.

With the mixer still on low, add the boiling water in a slow stream. Pouring slowly will gradually increase the temperature of the -batter—this way, the eggs won’t cook. You want the water to be hot to help emulsify the batter and create a smoother, more velvety cake. Aim for a final batter texture that’s thin like brownie batter.

Divide the batter evenly among the three prepared cake pans. Bake the cakes on the center rack for 40 minutes. Don’t move them around while baking or they will collapse. Remove the cakes from the oven and let them cool completely.

In the bowl of the stand mixer fitted with the paddle attachment, combine the confectioners’ sugar, cream cheese, butter, sour cream, and vanilla. Begin mixing on low speed and gradually work up to high, making sure to scrape down the sides and bottom of the bowl. Mix thoroughly, ensuring there are no lumps.

Remove the cakes from their pans. Place one cake layer on a cake plate. Spread an even layer of the cream cheese frosting on top. Repeat with the second and third layers, ensuring an even layer of frosting between each layer. Finally, frost the top and sides of the cake. Sprinkle the top with crushed candied pecans and raspberry powder. Slice and enjoy. Leftover cake will keep for 3 to 5 days, wrapped or in a container. 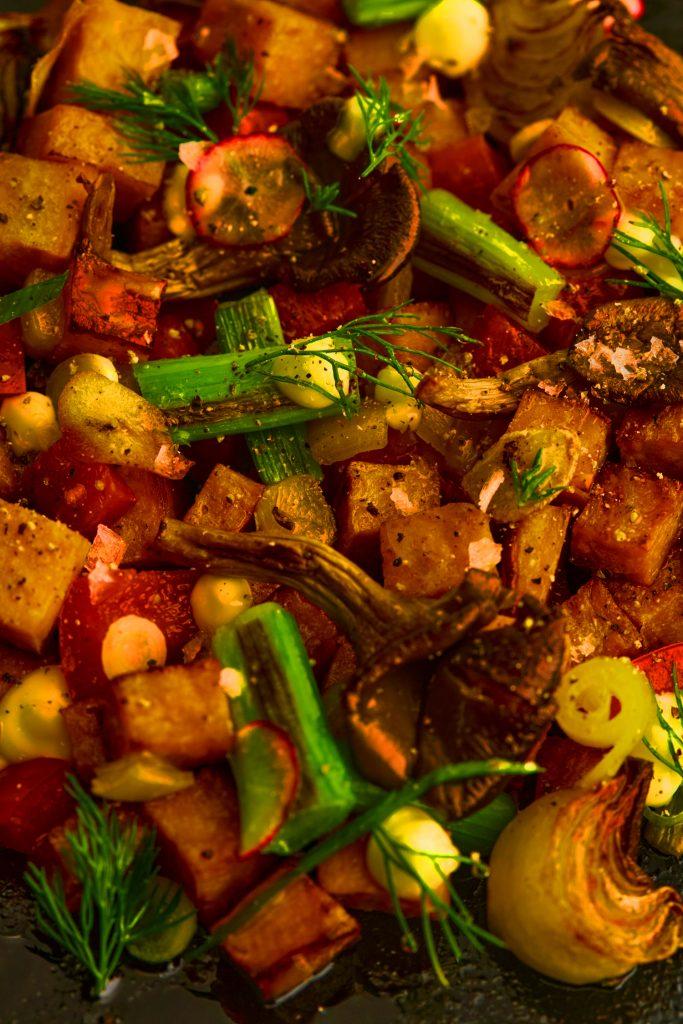 Far too often, sweet potatoes are relegated to holiday dishes like sweet potato casserole and pie. But the naturally sweet orange flesh of this tuber is a year-round staple that can make a play during any course. Our take on potato hash centers bright, warming elements like ginger, a hint of coriander, and cinnamon. You can curve the ketchup for our Aquafaba Aioli.

Heat a cast-iron skillet over medium heat. We’ll come back to it.

In a medium saucepan, heat the grapeseed oil over medium heat until it registers 365°F (185°C) on an instant-read thermometer. Line a sheet pan with paper towels and set it nearby. Add the sweet potato cubes to the hot oil and fry for about 6 minutes, stirring occasionally. The exterior of the cubes should look a bit blistered. Using a slotted spoon, remove the sweet potatoes from the oil and transfer them to the lined sheet pan to drain.

Return to your hot cast-iron skillet. Add the olive oil and the oyster mushrooms. Pan roast the oyster mushrooms until they develop a brown color and their moisture evaporates, about 8minutes. Add the garlic, ginger, onion, scallion whites, bell peppers, salt, paprika, cinnamon, black pepper, cayenne, and coriander. Stir well to incorporate the spices. Cook over medium-high heat for 8 to 10 minutes, then add the fried sweet potatoes and scallion greens. Stir to combine and remove from the heat.

Drizzle the hash with the aioli. Garnish with fresh dill sprigs. Serve immediately.