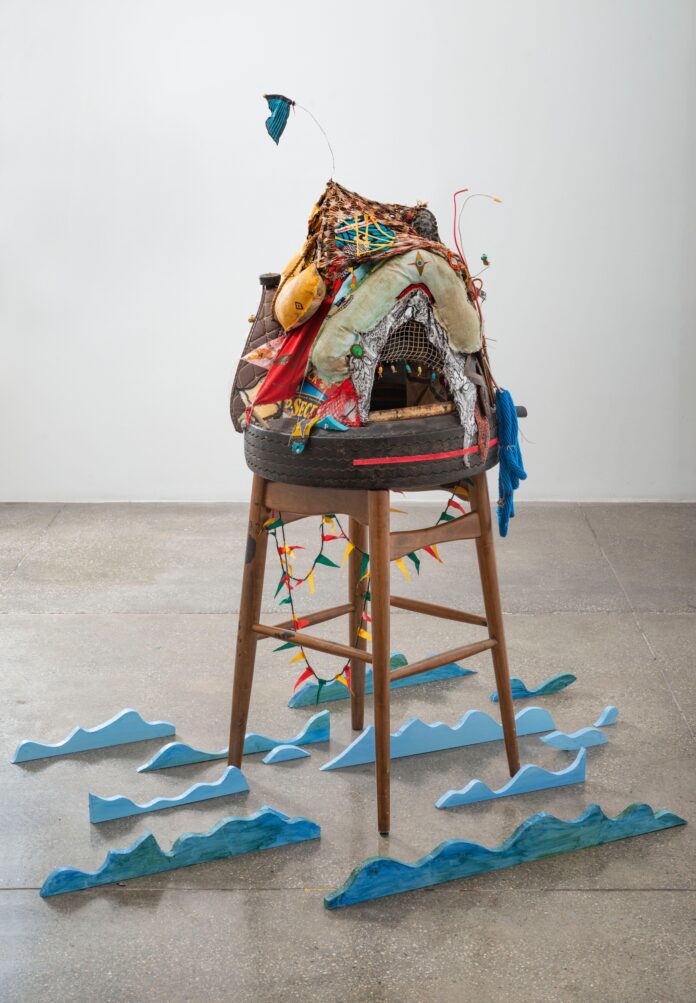 An exhibition featuring sculptor Nyugen E. Smith’s most recent body of work opens this week at CulturalDC, a nonprofit art space in Washington DC. Bundlehouse: Ancient Future Memory features assemblages of objects Smith collected from Kinshasa province in the Democratic Republic of the Congo, New York City, and the streets of the American capital.

During a London trip in 2005, a photojournalist friend introduced Smith to photographs depicting makeshift houses at Uganda’s refugee camps. Found materials have always been fundamental to Smith’s practice, but the images of precariously-built homes inspired a fascination with the social ramifications of vernacular architecture. On the plane back to New York, Smith sketched his first architectural composition of discarded objects, which would eventually evolve into his ongoing Bundlehouse series.

“Houses that people had built with remnants of what was left behind spoke to me about the vulnerability of those many lives,” the artist says. “The work speaks to rebuilding a life by hand after being forced into a traumatic situation, but the idea has become more conceptual with mixed-media drawings in addition to sculptures.”

The artist created the show’s sculptures and two-dimensional low-relief drawings last autumn during the recently-launched Capital Artist Residency programme at CulturalDC. Aside from a Nashville trip to create his first Bundlehouse sculpture for Vanderbilt University, Smith has worked in DC, breathing new life into objects he collected from Kinshasa in September when he participated in the second Congo Biennale. Working alongside fine art students at the Kin ArtStudio was a twofold collaboration. “They had a chance to put their academic training into practice while after our studio time, they took me out to the streets to collect materials together,” he says.

The walks through different neighbourhoods not only provided the foundations for his assemblages, but also granted Smith a wider perspective on the effects of colonialism. “I had firsthand understanding of Patrice Lumumba’s assassination on the streets while back at the studio the students experienced creating work out of objects with the immediate process of evoking something in the viewer,” he says. “They may not be exactly sure what the object is or it may not be what they imagine the material to be, but this relationship creates an entry point to the work.”

Two assemblages in particular, FS Mini No. 10, Open Water and Rise Up and Walk (both 2022), typify the Bundlehouse series. The former sculpture holds an array of objects—including faux fur, nets, beads, bells and a wallet—over a wooden stool surrounded by wave-like painted cutouts. In the latter, the freestanding sculpture’s two legs carry a pile of objects, including bits of ceramic and leather, in the form of a human body, finished with a pair of shoes. “Houses don’t get up and walk by themselves, but people who are exposed to the reality of migration move their homes,” Smith says, also noting the work’s connection to West African egungun costumes, which are said to protect the body as a spiritual force.

Smith will also explore rituals throughout the show’s two-month run. A series of performances at CulturalDC’s Source Theater, titled While You Sleep, will present the artist in the role of a young poet immersed in dreams and nightmares about his ancestral past.