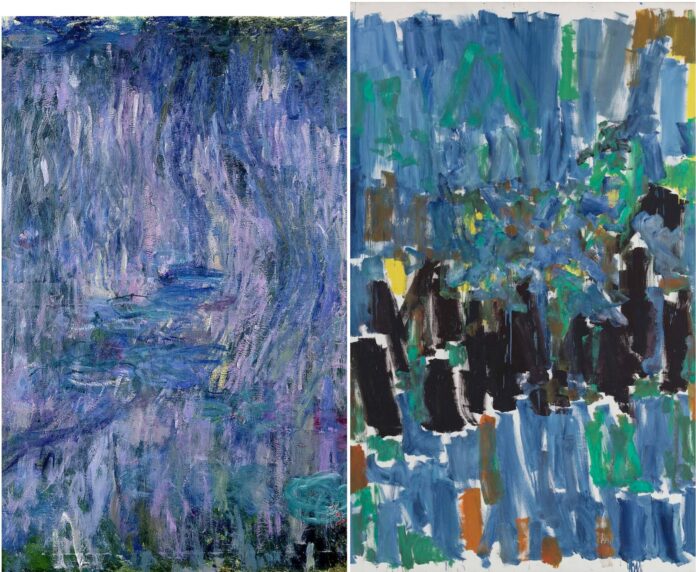 The American painter Joan Mitchell (1925-92), was born in Chicago one year before the death of Claude Monet (1840-1926), and settled in 1968 in the small village of Vétheuil (in the Val-d’Oise region), where the French master Impressionist lived from 1878 to 1881. As well as this geographic link, which led them to represent the same plants and landscapes along the banks of the Seine, the Foundation Louis Vuitton in Paris offers other analogies between these two major figures in painting. Both were creators of immersive environments, large format enthusiasts, and both diluted their elements in the same chromatic scale, more blurred for Monet, more saturated for Mitchell. This dialogue is enriched on the ground floor with a retrospective dedicated to Mitchell.

Ten years after the painter’s exhibition at Paris’ Centre Pompidou exploring his “Modern Eye”—influenced by the birth of cinema with the Lumière brothers—the Norwegian artist Edvard Munch (1863-1944) is back in Paris, this time for a more comprehensive treatment at Musée d’Orsay. This ambitious exhibition of 100 paintings and drawings (including 40 major works) revolves around the central idea of the “cycle,” reaffirming the force of the artist’s symbolism and themes throughout his 60-year career. Munch revisited themes and subjects in a manner that was nearly obsessive, yet coherent—just like the cycles of human metabolism, or the seasons. As the artist himself said: “In my art I have tried to explain to myself life and its meaning.”

In the context of its ongoing efforts to foreground women artists, the Centre Pompidou is taking a closer look at Alice Neel (1900-84). This icon of feminist activism and Communist Party member—she was investigated by the FBI at the height of the McCarthy era—never stopped making portraits of marginalised individuals: those whom society pushed to the sidelines because of their origins, eccentricities, politics or sexual orientation. Painted head-on, her models (residents of the working-class neighbourhoods of New York where Neel lived), become emblems, and her paintbrush became a sociopolitical weapon. This exhibition, with its focus on two arenas of struggle—class and gender—resonates with the conflicts of the present day: it is a radical stance for the Paris museum. “In politics and in life I always liked the losers, the underdog,” said the Neel. A portrait of the artist by Robert Mapplethorpe opens the show.

Born in the Italy of the 1960s in response to the extravagance of American Pop Art and Abstract Expressionism, the Arte Povera movement is in the spotlight in two Parisian art spaces working in concert for the first time: Le Bal and Jeu de Paume. This double exhibition offers an original angle of exploration by looking at the art movement’s fertile relationship to ‘mechanical’ images: photography, film and video. The French title “Renverser ses yeux” (“Reversing the Eye”), selected for its anti-establishment significance, refers to the Giuseppe Penone’s work Rovesciare i propri occhi. In addition to this emblematic photograph, the exhibition shows 250 pieces by 49 artists, including Claudio Abate, Piero Manzoni, Mario Merz, and Jannis Kounellis.

“For, things and existence are in a vast dialogue.” The art historian Laurence Bertrand Dorléac sets the tone for her carte blanche exhibition at the Louvre by choosing to introduce it with this line from a poem by Victor Hugo. This ambitious, historic exhibition by a star curator is reviving the minor (and devalued) genre of the still life, a “reproduction of inanimate things or beings” which, according to Dorléac, reveal a great deal about our evolution as a species. A 1573 oil painting by Guiseppe Arcimboldo and a 2020 snapshot by Nan Goldin demonstrate the scope of this collection of some 170 works in a variety of media, divided into three key periods: antiquity, the 16th and 17th centuries, and the 20th and 21st centuries. In this era of climate challenges and criticisms of overconsumption, the exhibit also invites us to consider the role and value accorded to material things.

Füssli: the realm of dreams and the fantastic, Musée Jacquemart-André

An artist of the grotesque and the sublime, the Swiss-born British painter Swiss Johann Heinrich Füssli (1741-1825) is eminently famous for
his interpretation of The Nightmare (1781)—a demon crouching on the chest of a young sleeping woman. When he revealed it at London’s Royal Academy it was an immediate success. At the Jacquemart-André museum, 60 paintings selected by a trio of international curators highlight the undisputed talent of a self-taught artist who originally trained as a pastor. Füssli drew on literature, including Shakespearean subjects with mythological and biblical references, to develop a singular visual language, going against the expectations of his time.

The Musée des Arts décoratifs is paying homage to the 1980s: aside from the end of the cold war, this decade persists in the collective imagination as a time of transgression and effervescence. From the decorative arts to fashion, by way of graphic design, this collection of 700 iconic objects revisits an era of transformation. Silhouettes are architectural, as in the creations of the star couturier Jean-Paul Gaultier; everyday objects are high tech with designer Philippe Starck; posters for 80s Parisian “it” places Les Bains Douches and Le Palace hang from the walls of the first museum dedicated to the decorative arts—founded in 1982 as a result of the cultural policy of Jack Lang and François Mitterrand.