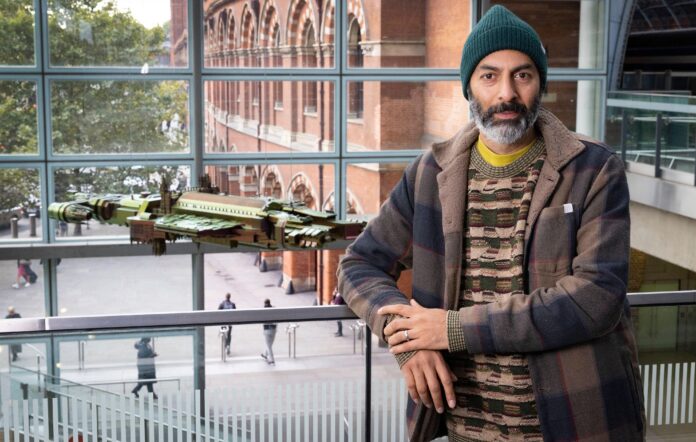 Commuters passing through London’s St Pancras station today will be greeted by a new sight: now suspended from the ceiling is a large, multi-coloured metal structure resembling a spaceship. The work, by the British-South Asian artist Shezad Dawood, is the latest art commission for the capital’s international rail terminus.

“London is replete with fictions and fantasies, it’s where the future and the deep past meet,” Dawood says of his sculpture that melds Neo-Gothic and futuristic influences. This combination finds a natural harmony in the steampunk subculture—a genre of revisionist fiction from the 2010s that reimagines the Victorian-era’s aesthetics and steam-based technology through a sci-fi lens. “Speculative fiction is a huge through line with my work,” Dawood says. “I hope this project, with its meeting of past and future, allows us all to imagine alternative pathways, and how we might collectively work together to travel in new directions.” He jokingly adds that with Steampunk reportedly seeing a resurgence among Gen Zs, the work is now also “unexpectedly trendy”.

HMS Alice Liddell (2022) is named after the women’s rights campaigner who is thought to have inspired the character Alice from Lewis Carroll’s novel Alice in Wonderland; the original manuscript for which sits in the nearby British Library. Dawood says that Liddell’s activism is now largely overshadowed by her association with Carroll, so the work is an opportunity to revive interest in her life. “I think Alice in Wonderland, like all the best speculative fiction, can be re-imagined by successive generations and communities,” he says.

At five-metres-long, it is the artist’s largest sculpture to date, outsizing his three-metre coral work that he showed the most recent edition of Desert X in Al-Ula Saudi Arabia. Comprising a steel frame encased by 3D printed polyurethane body it is painted in a murky colour palette applied in patterns that evoke mid-20th century psychedelia. Its installation presented “teething challenges”, Dawood says, as this is the first time a commission has been shown in the glass cube entrance. Usually commissions are installed at the section of the station that greets disembarking Eurostar passengers.

The sculpture, proposed in 2019 and delayed due to Covid-19, is the eighth Terrace Wires work, the station’s public art initiative that commissions a new work to hang from its roof. Previous artists to take part include Conrad Shawcross and Tracey Emin, whose neon I Want My Time with You was installed in 2018. While most Terrace Wires commissions are only kept for six months, Emin’s remains in the station indefinitely.

Though many of the station’s visitors rush past these works, Dawood has included several aspects to his work that invite closer inspection and even interaction. The artist, who grew up nearby to the station, references its best-known architectural features: the ship’s midsection resembles the cantilevered glass roof while its rudders are encircled by spires and turrets much like those that rise out from the the adjoining the 19th-century building that is now the St Pancras Renaissance Hotel—both features are often-overlooked “engineering marvels”, Dawood says.

The work also involves an accompanying augmented reality (AR) Instagram filter that can be accessed via the Instagram account of St Pancras. Pointing one’s phone at the sculpture generates a number of moving images on the screen, including a giant caterpillar, chimneys and triangular portals that reference “esoterica”, Dawood says. Accompanying the animations is a new audio track from the musician JayaHADadream, who is part of the Nottingham-based all-female WondHERland Collective. The collective is attached to New Art Centre, a new contemporary art space in Nottingham, to which Dawood has established an ongoing relationship.

“The organisers wanted this work to reach out to the regions. If it is about London’s reach to the regions and the world, how do we connect it back to Nottingham?” asks Dawood. Also accompanying the commission is new series of podcasts created by that will extend some of the ideas in Dawood’s commission.

Less Than Two Years After It Was First Proposed, the ICA San Francisco Opens in Lightning Speed With a Solo Project by Jeffrey Gibson