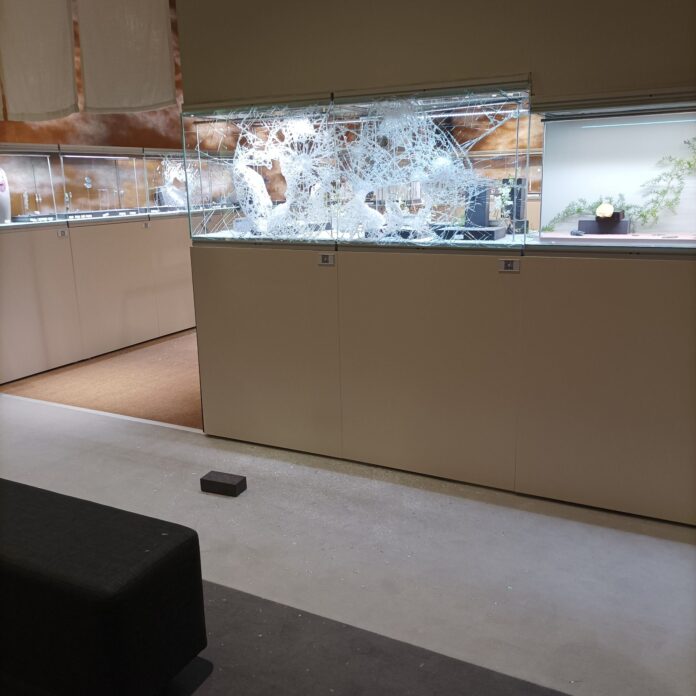 Tefaf Maastricht was evacuated this morning after several men, at least one of whom was reportedly armed, attempted to rob a jewellery stand.

Images circulating on Twitter show two vitrines were damaged on the booth, thought to be that of London dealer Symbolic & Chase, though it is not clear whether anything was taken. In another video, one man is shown smashing a glass cabinet with a mallet while two other men ward off other dealers and visitors. One appears to be holding a gun.

In a statement, Tefaf says: “At approximately 11.30am, Tefaf Maastricht was evacuated due to an incident within the fair. The fair’s security teams worked quickly to disarm an offender and Dutch police were on site within minutes. Nobody was injured during the incident.”

According to the statement, the fair’s “stringent safety procedures” were followed and all visitors were successfully evacuated. A spokesperson for Tefaf adds: “Tefaf has robust procedures in the event of a security breach. These were precisely followed, and all visitors, exhibitors and staff were safely evacuated. The fair has now reopened. Tefaf and the MECC are now working with the authorities—no further statement will be made.”

One dealer on the ground says the situation was “extremely well-handled”. They add: “Most clients won’t even have realised it occurred. The thieves were apprehended quickly by the police and no injuries incurred.”

Raphael Paintings You Should Know

Dated to a century after Leonardo's death, the work does not come from the artist's studio