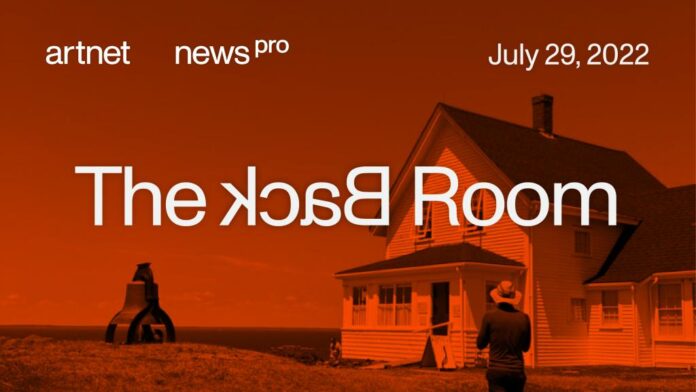 This week in the Back Room: Maine’s market moment, Barbara Kruger’s auction ascent, European biennials barge back into the news cycle, and more—all in a 6-minute read (1,554 words). 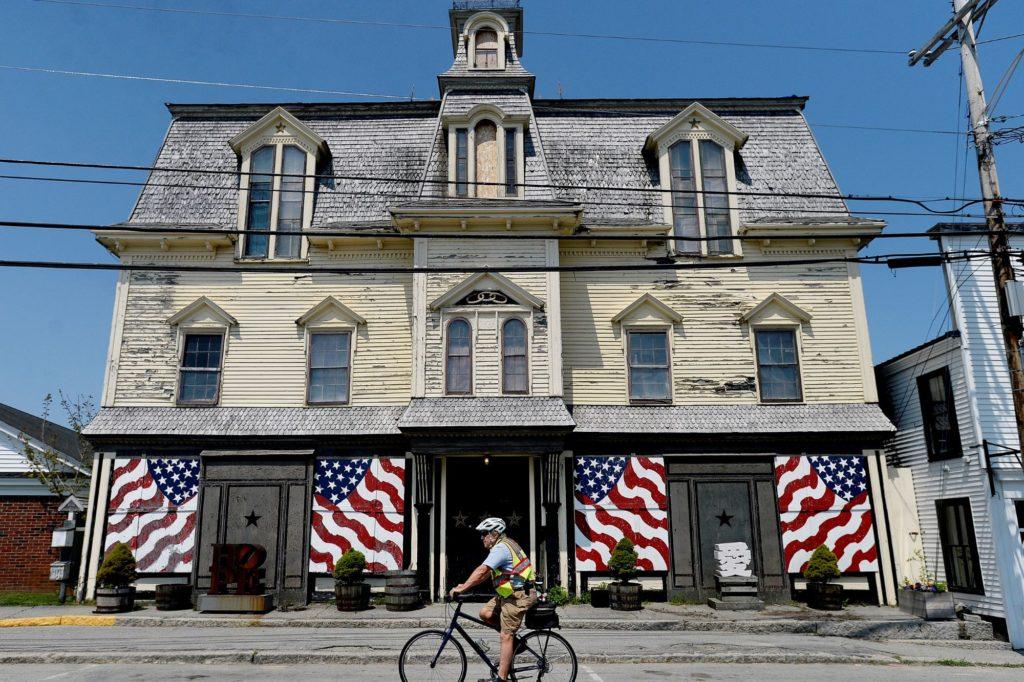 This summer, the biggest wave of east-coast art-market action isn’t making landfall in the Hamptons, Martha’s Vineyard, or any of the other seasonal haunts we’re so used to hearing about this time of year.

Instead, more and more heavy hitters have quietly begun swirling around a new regional hub: Maine. In a recent column, Katya Kazakina gave us a sandals-on-the-ground view of the art trade’s latest U.S. hotspot. Today, we’re giving you a handy need-to-know guide to what she found there, and what’s just over the horizon…

Over the past year, the most consequential market development in Maine has been trendsetting dealer Karma’s decision to set up its first non-New York expansion there. The space—a restored former Catholic church—is technically still owned by gallery artist Ann Craven. She originally intended to use the building as her studio before deciding it was “too grand” for that purpose, according to Karma owner Brendan Dugan. So Dugan took it over instead.

Craven and the gallery now collaborate on annual exhibitions at the outpost. This summer, they staged “Sanctuary,” which pairs abstract sculptures by American postwar artist Thaddeus Mosley (each priced around $200,000) with intimate figurative paintings by his contemporary Frank Walter (priced from $30,000 to $100,000). The program and the prices both elevate Maine’s scene to a  higher level.

The nearby Center for Maine Contemporary Art (freshly expanded in 2016) currently features two shows by hotly pursued living talents, too: a solo affair by Reggie Burrows Hodges, whose paintings have ignited bidding wars at auction in the past year; and a group show of lauded Maine artists, including Craven, Katherine Bradford, and Inka Essenhigh.

Another major institutional attraction is (finally) imminent, too. The resolution of a prolonged legal battle over Robert Indiana’s estate recently cleared the way for the creation of a museum dedicated to the Pop artist, who lived on the Maine island of Vinalhaven.

These milestones have been made possible partly by “the flexibility of remote work, the ability to sell art to an international audience from a remote location, and growing cultural infrastructure in the state” since the pandemic, Katya writes. Add in a “thriving” food scene and the idyllic surroundings, and all the ingredients are in place for a must-experience fusion of art business and art pleasure.

The U.S.’s northeasternmost state may actually be overdue for the industry spotlight. Maine’s remoteness, natural wonders, and unique light have now been drawing bravura artists to settle there for close to 150 years.

The lineage starts with American landscape painter Winslow Homer, who moved to Prouts Neck in 1883. (You can see why in his solo exhibition at the Met, on view through July 31.) Realist painter and illustrator N.C. Wyeth spent 25 summers in Maine, too, and his artist son Andrew and grandson Jamie continued the family tradition.

Alex Katz is another longtime state resident. His artwork donations have also bolstered the collection at Colby College, which recently acquired two coastal islands where Andrew Wyeth painted some of his best-known works.

After leaving the toxic boys’ club that was the postwar New York art world, Drexler lived and worked “in virtual obscurity” on Monhegan for the last 16 years of her life, Katya writes. Last spring, Maine’s Farnsworth Art Museum deaccessioned two of her works to help diversify its collection. The final prices shocked almost everyone: nearly $3 million together, or 18X their combined high estimates.

Drexler’s rise has been quietly building for years in the private trade. Saara Pritchard, a partner at next-generation advisory Art Intelligence Global, has been championing (and collecting) Drexler with vigor for some time. Monhegan Island’s nearly 40-year-old Lupine Gallery has been fielding an onslaught of inquiries about the artist’s work since the first auction fireworks exploded in March, too.

The flurry of demand around Drexler’s rich (and voluminous) oeuvre means that Maine is a market hotbed for artists living and dead alike. At this rate, her works won’t be the last to pull collectors, dealers, and all manner of tastemakers to the upper northeast.

Don’t expect a full-on gallery-expansion arms race to consume Maine anytime soon. So much of its allure comes from its status as a place where artists can  the grind of big cities and big business. Even dealers and advisors claim to adore the laid-back, collegial vibe.

That said, it would be naive to assume that decorum and balance will be enough to dissuade more and more market players from making their presence felt in the state. If we’ve learned nothing else from the past 20 years of the art industry, we’ve learned this: when it comes to growth, too much is never enough as long as the money keeps coming in. 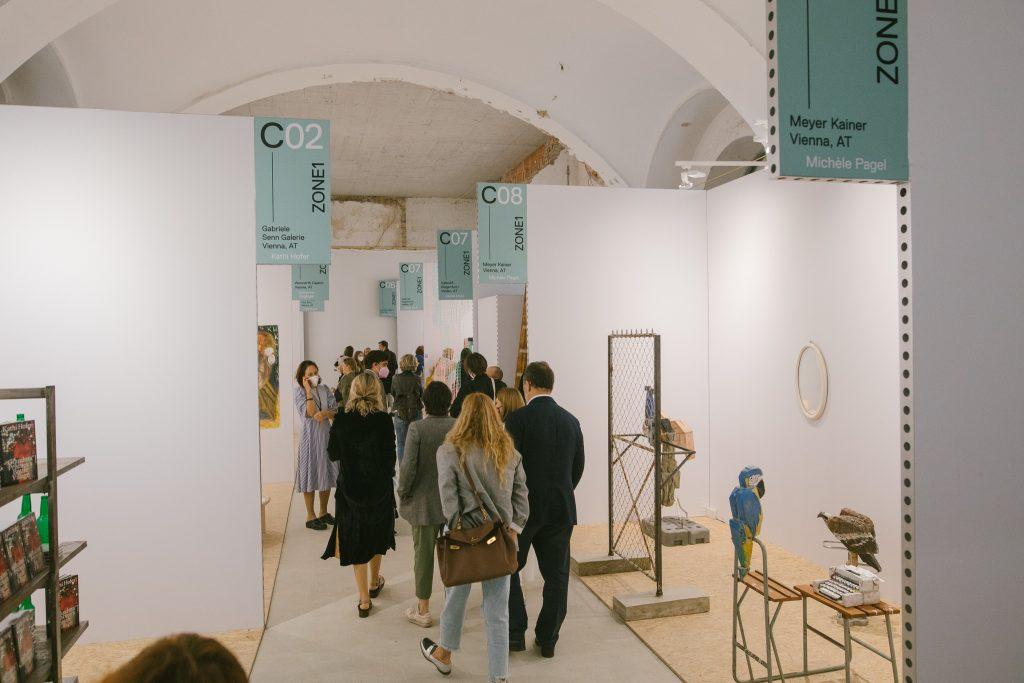 View of the 2021 edition of Vienna Contemporary. Photo: Niko Havranek.

The latest Wet Paint will be up later today, but here’s what else made a mark around the industry since last Friday morning…

“This is total b.s. Sergey and I are friends and were at a party together last night!”

—Elon Musk’s tweet in response to a report that part of his trip to last year’s Art Basel Miami Beach included sleeping with Nicole Shanahan, the wife of his longtime confidant and Google cofounder Sergey Brin. ()

I Shop Therefore I Am 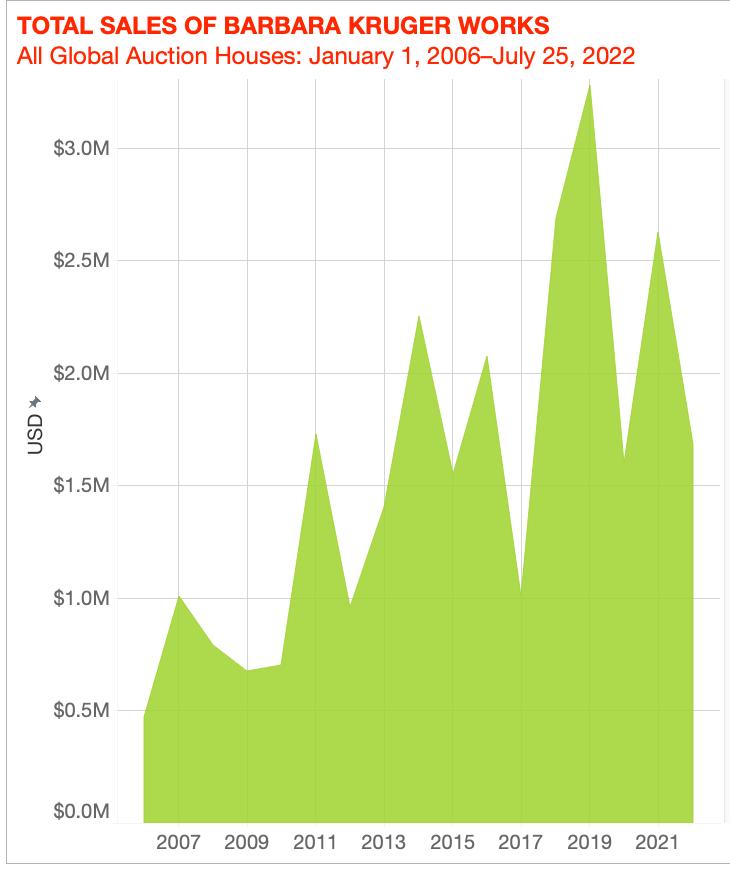 Barbara Kruger produced many of her most famous works in the 1980s, but current events have made them feel more vital than ever—and her market is heating up in step.

Click through for details on Kruger’s most in-demand works, the best opportunities to find value in her oeuvre, and the wider context for her market’s progression.

Plus, which rapper-producer touched the art at Untitled? Which mega-dealer might need to buy more underwear before the weekend? Read on for answers.