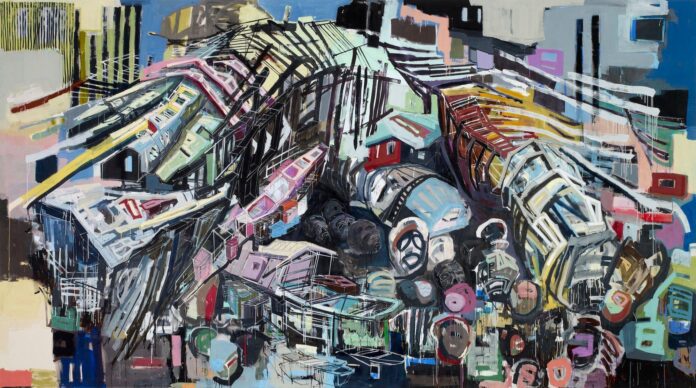 One of the stars of the 2022 Whitney Biennial, the late Denyse Thomasos, has symbolically returned to Toronto, where she moved with her family as a youngster after being born in Trinidad and Tobago in 1964. Though she died a decade ago at just 47, she lives on at the Art Gallery of Ontario (AGO), where she has taken over the museum’s spacious fifth floor. The exhibition, Denyse Thomasos: just beyond (until 20 February 2023), features more than 70 paintings and works on paper, many of them sizeable, others rarely seen.

It’s a bit of a twist that her work is being shown in such a cavernous spot, as much of her work, described as “semi-abstract”, is concerned with confinement. As she wrote in one of the sketchbooks included in the show, “My work is about cages, about enclosures, being enveloped.” Black culture, history and politics were other areas Thomasos explored.

She wasn’t holding back with brush in hand, as she liked to work very large, many of her canvasses being 11ft by 20ft, the size of her studio wall in New York’s East Village, where she later resided. “She was obsessed with scale,” co-curator Renée van der Avoird explains. “We needed the fifth floor to show [the works] because you need that space to back up and look at them.”

Others who played a big part in making the Thomasos exhibition happen were the Art Gallery of Guelph’s Sally Frater, and Michelle Jacques, who is chief curator at Saskatoon’s Remai Modern, where the show will travel next spring. Jacques, who like Thomasos has Caribbean roots, previously worked at the AGO and got to know the artist, who created a large wall mural for the gallery during renovations in 2005. “She wanted the world to be a better place for herself and her daughter,” Jacques says. “She could just see beyond the world as it is.”

Staff were still in the process of stretching some of the large works during the exhibition’s press preview on 4 October, and it looked like they were going to be at it for some time. One even had a few tears and so needed mending.

Thomasos travelled widely, too, to Peru, Southeast Asia, India, China, Mali, Senegal and South Africa, all the while snapping photographs that she would refer to in her work. There are several of her photo albums on display at the AGO, as well as her paint-spattered shoes.

Amazingly, if you were lucky enough to have visited the Canada’s Wonderland amusement park, which is just north of Toronto, or the entertainment venue Ontario Place, in 1983 or 1984, you could have sat for the artist and had your portrait done by her for a small fee. Two years later she was commissioned to paint murals for the University of Toronto, where she was studying art. She later attended Yale University, where she first made work addressing slavery. After another five years in Philadelphia it was on to Rutgers University in New Jersey, where she was an associate professor of art.

Thomasos’s early influences included Theodore Gericault, Anselm Kiefer and Eric Fischl. But as she matured she began to move on from doing figurative works. There were other factors. “The immediate experience of urban collapse had a psychological effect on my work,” she said in 2012.

“My whole life has been about this idea of developing a language out of line,” she is quoted in the AGO catalogue as saying. “There was something very tedious about the technical aspect of figuration that I was not interested in. The moment I actually had to make a hand look like a hand, I was not connected to my concept. […] Whereas line, this sort of constant line, was like the recording of time.”

She added: “I could not be disconnected from my canvas emotionally, not even for one minute, and line allowed me that.”

It Turns Out Jeff Koons, Pace, and Other Art-World Heavyweights Had Millions of Dollars in PPP Loans Forgiven by the Government