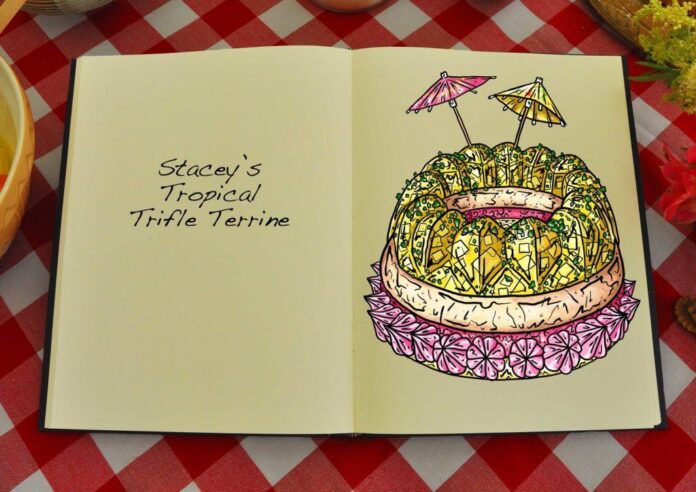 For more than a decade, , or , as it has known here in the U.S., has celebrated the art of baking, with amateur contestants crafting astounding confections of flour, butter, and sugar. But before the show reveals those finished creations, it whets viewers’ appetites with colorful illustrations of each bake, which for all 13 seasons, as well as various holiday specials and spinoffs, have been designed by Bristol artist Tom Hovey.

Now 39 years old, Hovey had moved to London and was struggling to find work as a young artist back in 2010 when a friend connected him with an entry-level editing job at a new cooking show. As it happened, that show was , which was just getting underway on its very first season—and fortuitously, Hovey confessed to his new bosses that he was an aspiring illustrator for whom a T.V. job was nothing more than a paycheck.

“One day, they came back from lunch, pulled me aside, and said, ‘Through the course of editing the first episode, we’ve realized that there’s a little visual element missing from the show. The bakers are throwing flour and eggs in the bowls and then sitting on the floor and staring at ovens for 20 minutes—it’s hard to kind of get a grasp on what’s actually being created. We’d like you to have a go at giving the viewers a way to understand what the bakers are putting together,’” Hovey told Artnet News.

It took a few drafts, but Hovey eventually managed to create the first of the colorful illustrations that would quickly become a fixture of the show. 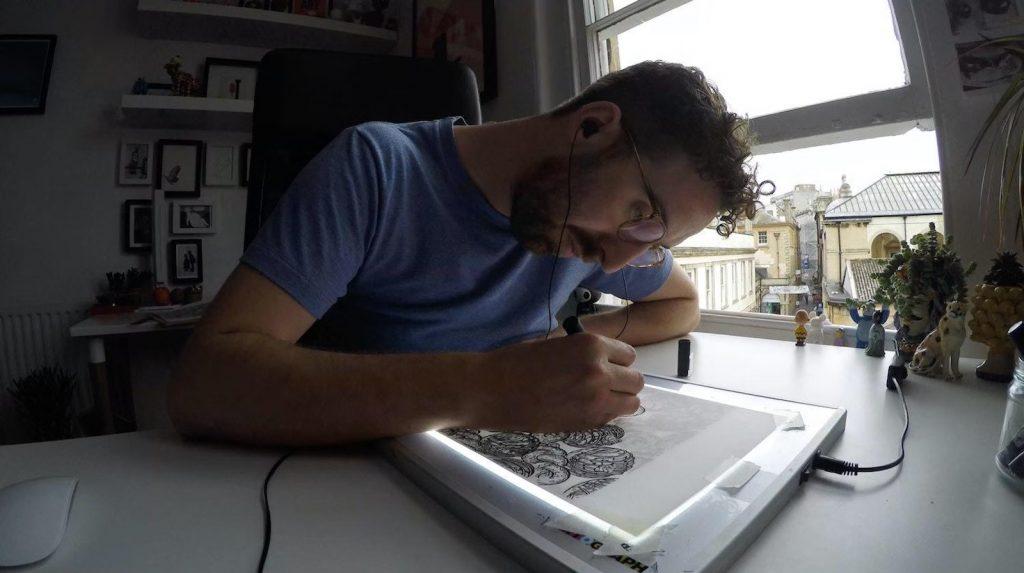 Tom Hovey at work in the studio. Photo courtesy of Tom Hovey.

In the early days, he refused to tune in to the show. “I couldn’t watch it at all, because I wasn’t massively happy with my own creative output,” Hovey admitted.

Now, he makes sure to catch at least the first episode each season, to put a face to the names of the bakers whose work he’s been illustrating.

In the beginning, Hovey created the drawings at night and on weekends while continuing to work in the editing bay. But after three years, he was able to quit and make freelance illustration his full-time gig.

The artist was also able to come to an agreement with the show to share the copyright for the art, where the production company, Love Productions, owns the colored graphics as they appear on screen, while Hovey retains the rights to the original line work. (That means he can sell prints of his illustrations.) 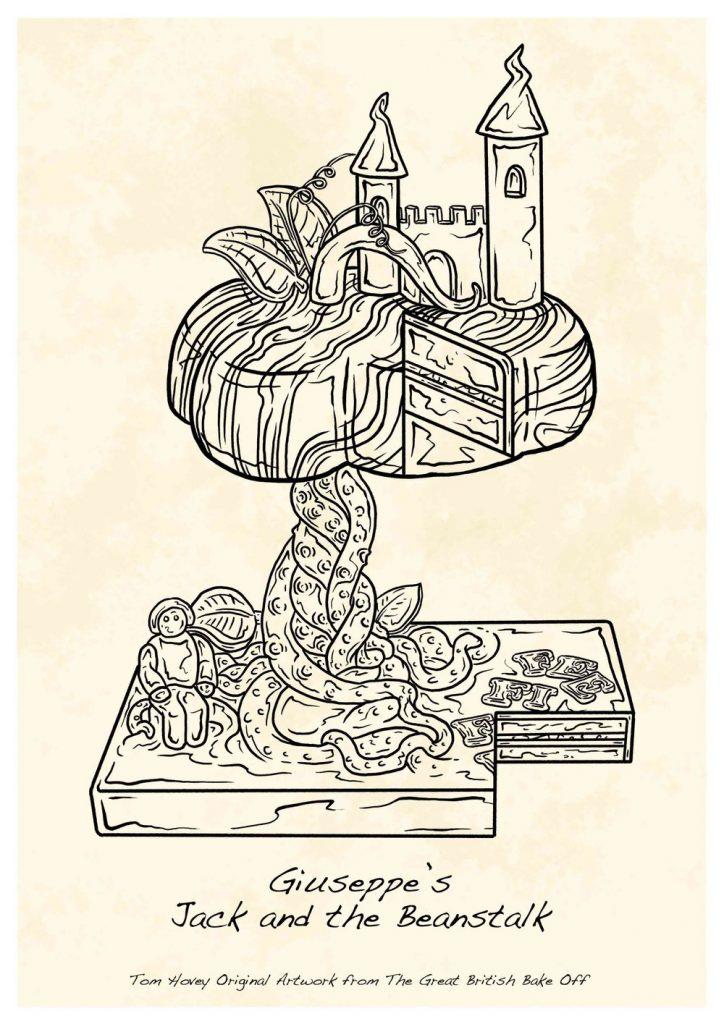 A planned bake by Guiseppe Dell’Anno for . Photo courtesy of Tom Hovey.

Those drawings, which he created by hand for the first six years using Posca paint markers, have even been shown at museums, including in the exhibition “The Clamor of Ornament: Exchange, Power, and Joy from the Fifteenth Century to the Present,” which closed at New York’s Drawing Center last month.

Because many of his early drawings were somewhat rough sketches, complete with ink smudges, Hovey decided to lend the museum the artwork from the , released in 2016.

Many of them depicted “the ‘best of’ of bakes from past seasons, but I redrew them to better fit a coloring book, with more lines and more details than you would have on the telly,” Hovey said.

It was that project that convinced Hovey to switch from hand drawings to an entirely digital production process. 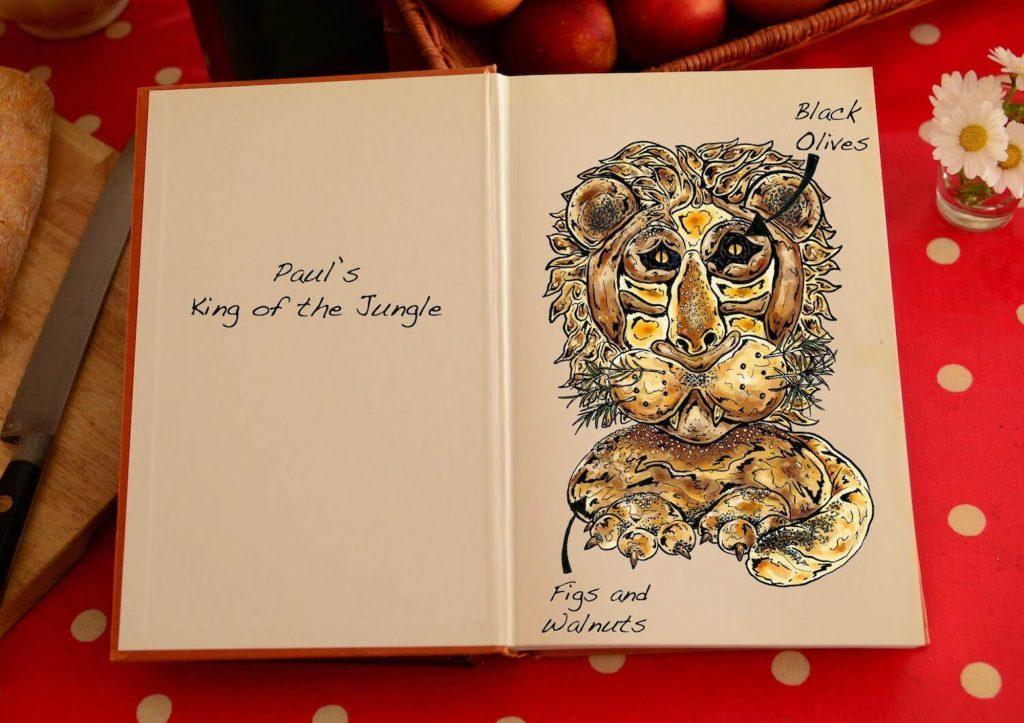 A planned bake by Paul Jagger for . Photo courtesy of Tom Hovey/Love Productions.

“Having an analog part of the process is time consuming,” he explained. “I would sketch every bake in pencil first, put it on a lightboard and trace it in ink using the smallest finest possible nib, then scan all those individual pieces and touch them up in Photoshop and add color and graphics.”

It was the scale of the coloring book project that proved the last straw.

“Zooming in to 300 or 400 percent to erase all the little ink splatters that came off the end of my pen, that drove me a little bit nuts,” Hovey recalled. “I thought, ‘I am never going to use a pen again!’ So I went out and bought a Wacom [tablet].”

He worried initially that fans of the show might pick up on the change and complain.

“So I took a lot of time to create a pen in Photoshop that pretty much exactly replicated the one I used in real life,” Hovey said. “Six years later, no one’s noticed!”

Today, he runs a small business, Studio Hovey, with a team of dedicated employees and freelancers who help him churn out illustrations in his distinctive style for roughly eight months a year, from April or May until December. He spends the rest of the year taking on other projects—food illustration has become his sole focus, but he has branched out into more savory dishes. 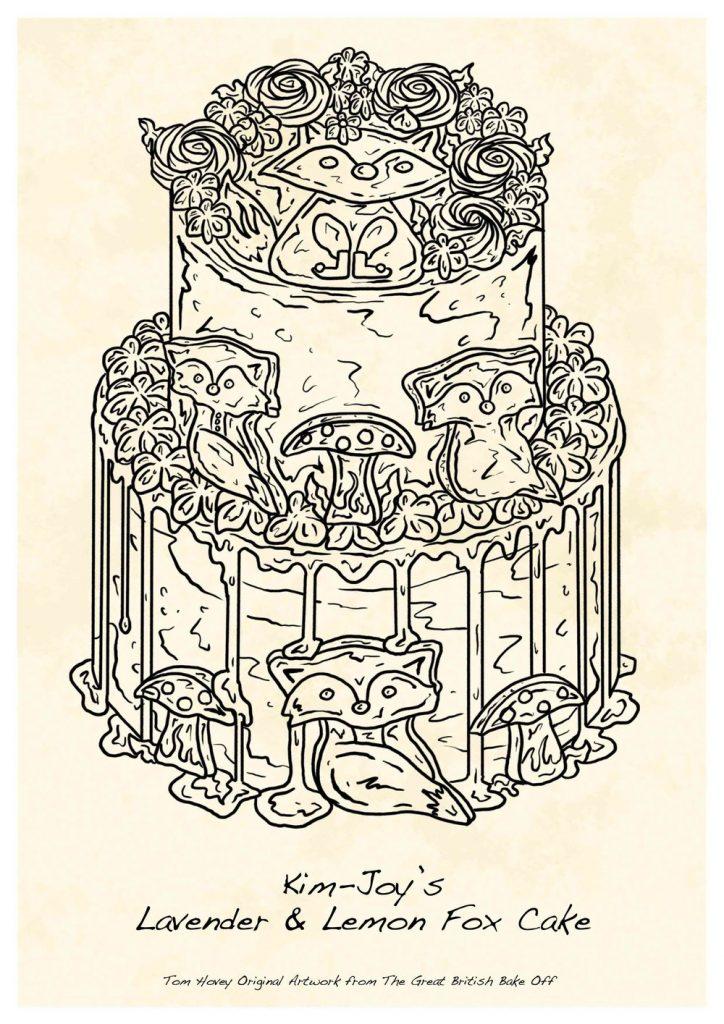 A planned bake by Kim-Joy Hewlett for . Photo courtesy of Tom Hovey.

“As much I’ve drawn thousands of cakes, I haven’t drawn all the food, so it’s fun and exciting to explore different types of food. And because eight months of the year is very much about drawing cakes, I look for anything and everything different just to keep a level of sanity,” Hovey said. “When I started , I never thought it would be the hallmark of my career!”

He also participates in an internship program at Bristol’s University of the West of England that helps illustration graduates get a start in the field. The program also enables him to meet the demand created by the seemingly never-ending stream of shows, including the junior edition, the U.S. version, and specials for charities, celebrity guests, and various holidays.

(He first hired help in 2016, ahead of the birth of his daughter, recognizing he was burnt out and that maintaining his current workload alone was becoming impossible and unsustainable.)

But no matter what variety of show it is, or what the challenge is, Hovey’s task is always the same.

“My brief is to draw a representation of what the bakers plan to create in the tent as if they’d sketched it back at home in their kitchen,” he said. “That’s why you see the illustrations in an open book on the kitchen worktop.” 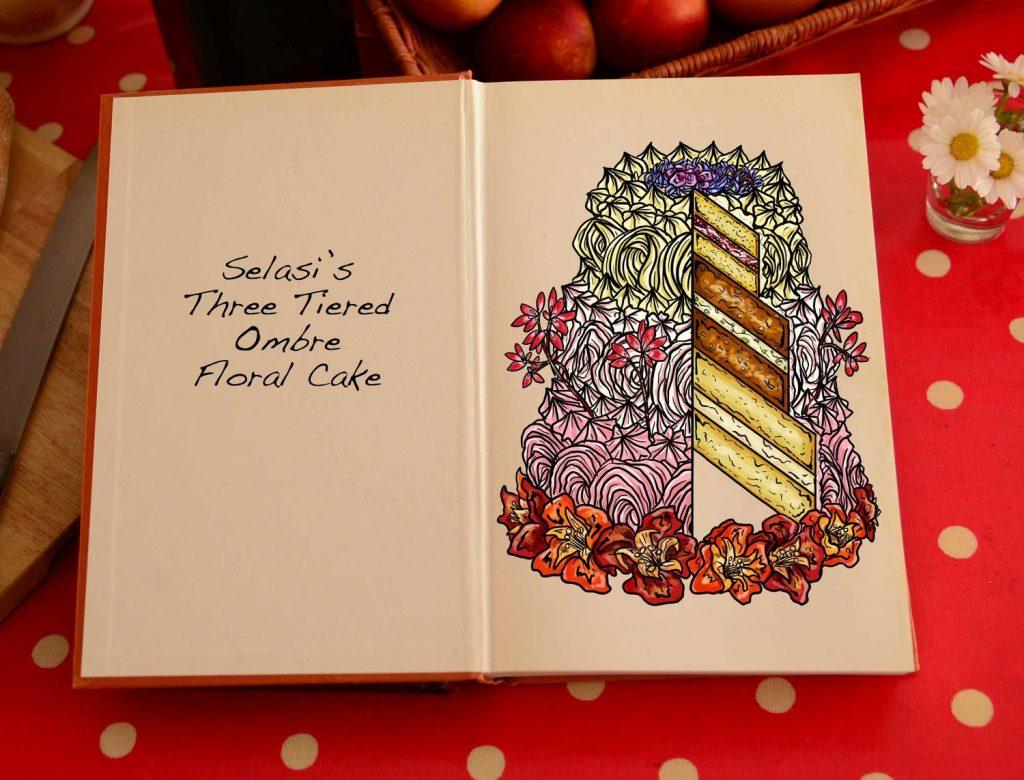 A planned bake by Selasi Gbormittah for . Photo courtesy of Tom Hovey/Love Productions.

To accurately represent each bake, Hovey is provided with photos of the finished dish from every angle. In more recent seasons, the production team has also instructed bakers to take photographs of their work while practicing at home, so Hovey can get a better sense of their planned vision even if it isn’t successfully realized in the tent.

“A lot of the time, in their practice space when they’ve got all the time in the world and no pressure from T.V., it turns out a lot better,” he acknowledged.

Despite having illustrated more than 3,000 bakes over the past 12 years, the artist has never actually tasted any of the food—even thought this might seem a natural perk of the job. In fact, he has only been on set once, when he visited with his wife in 2014.

“It was quite nice to see the tent in person, but the reality is it’s a long day of filming, and if you don’t turn up at the right time, there isn’t stuff to eat. You’ve got to hang around, and we were just in and out really,” Hovey explained. (He’s been invited back many times, but has never made it happen.) 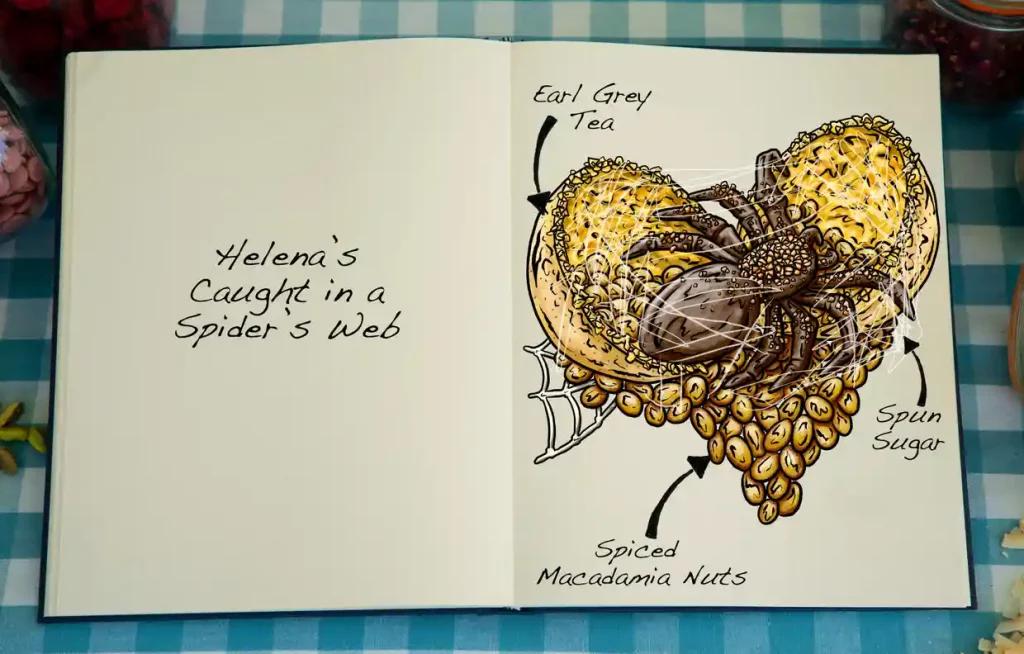 A planned bake by Helena Garcia for . Photo courtesy of Tom Hovey/Love Productions.

Despite being a self-proclaimed foodie, Hovey doesn’t have much of a sweet tooth: “I don’t run off after drawing and either eat cakes or want to make them. I’m just not into baking or desserts.”

But while he hasn’t developed any baking prowess in his time working for the show, Hovey’s baking lexicon has certainly expanded as formerly unfamiliar treats like and ganache are now a cinch to illustrate. And he is constantly amazed by the bakers’ abilities, and what they are able to achieve artistically.

“The skill level of the bakers has risen every year,” Hovey said, citing contestants Helena Garcia and Kim-Joy Hewlett as his personal favorites. “In the first few series, bakers really stood out when they made something amazing. Now it’s like every week… every baker is making incredible stuff.”