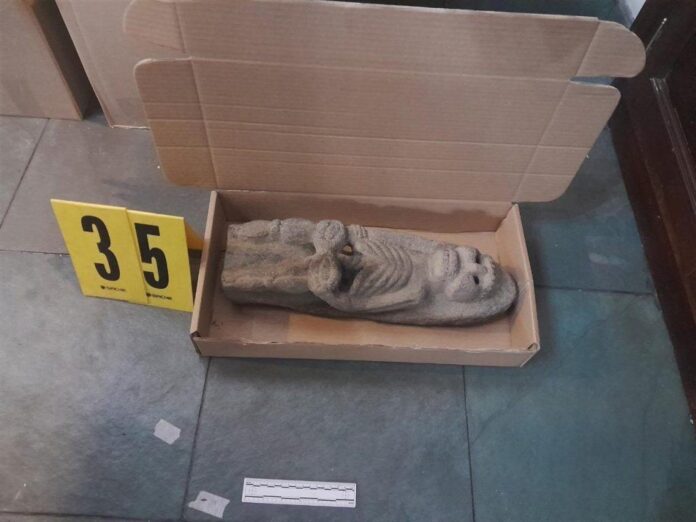 An American ex-pat couple in Guatemala is facing charges of smuggling historic artifacts—which could mean five to 10 years in prison if convicted.

Stephanie Allison Jolluck first fell under suspicion on November 10, when she was stopped at Guatemala City airport, the reported. Her luggage was quite heavy, triggering an inspection. Inside, officials found two large Maya stone carvings, dating to 600 and 900 C.E. Jolluck claimed to have purchased them at a market in Antigua, where she lives.

It now appears that those sculptures were just the tip of the iceberg. Three days later, police stopped Jolluck in her car, and found 166 more historic artifacts. (A judge had already released her from custody.)

Jolluck was with another American, Giorgio Salvador Rossilli, and both claimed the artworks were worthless reproductions. (Rossilli also claimed that he had restored some of the artifacts found in their car for their owner, and had been returning them when he was arrested.)

“They argued that, because they are foreigners, they cannot tell one piece from another,” prosecutor Jorge Alberto de León told the . “They told the judge that because they were pieces of stone they had seen sold at the markets, they never imagined that they were ancient archeological pieces.”

Guatemala’s Culture Ministry begged to differ, finding 90 percent of the objects to be Pre-Hispanic originals. The country believes the couple is operating a network for the illicit trafficking of Maya artifacts and other cultural heritage.

Nonetheless, Judge Sherly Figueroa released Jolluck and Rossilli on $6,400 bail on Monday, prohibiting them from leaving the country and requiring a biweekly check-in with prosecutors.

Then came the raid of their home, conducted by the Office of the Prosecutor for Crimes against the Cultural Heritage of the Nation. The search turned up an astonishing 1,222 archaeological artifacts, 722 significant works in materials such as jade and basalt, as well as 500 smaller pieces.

Other objects seized by the police include computers, books, and a vibrantly colored stuffed bird that may be a quetzal. The General Directorate of Cultural and Natural Heritage of the Ministry of Culture and Sports has taken custody of the artifacts for analysis, according to the nation’s Ministerio Público.

Jolluck, age 49, is a photographer and designer, while the described 62-year-old Rossilli as “a connoisseur of Mayan [sic] folk art.” She wrote on her website that she “has always been fascinated by Indigenous cultures. As a lover of ethnographic art, antiques, and handicrafts, I enjoy shopping markets around the world.”

As of press time, Artnet News was unable to contact the couple’s lawyers, identified by the press as Juan Pablo Aris Bravo and Juan Carlos Velasquez.

The Role of Art Dealers in Art Industry