Home Events Movie Inside the Met, a new three-episode documentary by PBS, is meant to... 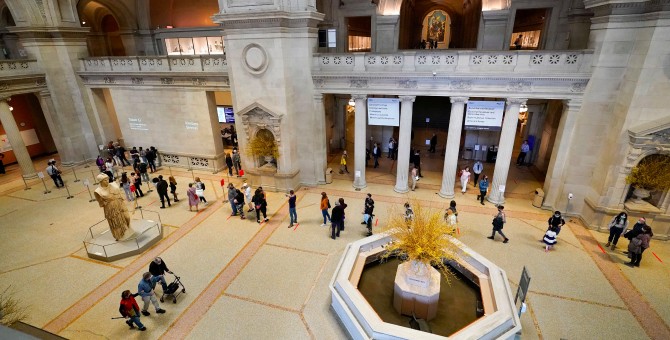 The Metropolitan Museum of Art in New York City has announced the release of “Inside the Met,” a three-part documentary. It will be available May 21 and 28 on PBS.

“America’s largest art museum is preparing to celebrate its 150th anniversary with many landmark exhibitions. When the COVID-19-stricken world closes, the Met also shuts down for the first time in its history. Then comes another crisis when the need for social justice arises in the wake of George Floyd’s murder,” according to the description of the mini-series on the PBS website.

As a reminder, the Metropolitan Museum of Art’s Costume Institute will open an exhibition about American fashion in September. Traditionally, it will be preceded by a Met Gala, hosted by actor Timothy Chalamet, singer Billy Eilish, poet Amanda Gorman, and tennis player Naomi Osaka.

Inside the Met consists of three episodes: The Birthday Surprise, All Things to All People? and Love and Money. The last episode touches on the opening of the Costume Institute exhibition, About Time: Fashion and Duration.
Planning for its anniversary, the Metropolitan Museum of Art, like many other institutions, was forced to close indefinitely last year because of a pandemic, the first time in its history. It returned to work in August on a limited basis, and the opening of About Time: Fashion and Duration was postponed from May 4 to October 29.

A separate part of the series focuses on the changes that began at the museum amidst the Black Lives Matter movement. Interviews with artists, curators, other museum staff and visitors describe how “an institution founded in the 19th century is trying to change and remain relevant in the 21st.”

Meet 5 Japanese Collectors Who Are Putting Their Country’s Art Scene...

As Unesco pledges $350,000 to safeguard sites, questions are raised about the country’s long-term commitment to restoring and protecting key locations in the face of the climate crisis