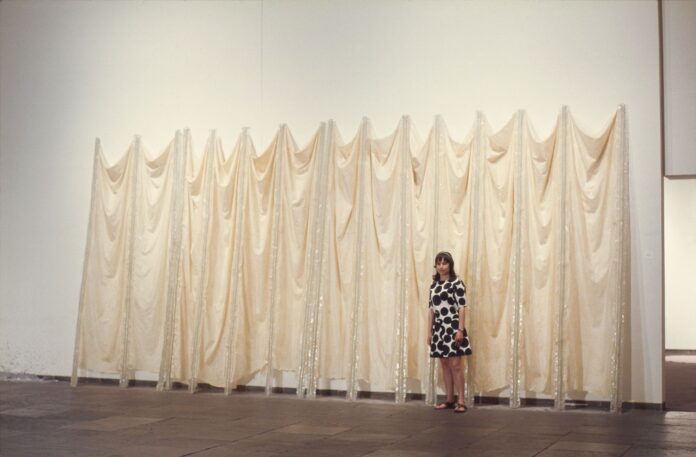 After 35 years of laying in storage, a monumental sculpture by Eva Hesse will be displayed this summer at the Guggenheim Museum in New York as the centrepiece of an exhibition exploring the artist’s material use and legacy.

Expanded Expansion was made in 1969, a year before the artist’s death, and features 13 10ft-tall panels made of rubberised cheesecloth supported by fibreglass and resin poles. Although displayed several times, the work was eventually deemed “unexhibitable” as its materials had deteriorated to the point that conservators were uncertain if it would support its own weight. It will go on view on 8 July after extensive restoration by the Guggenheim’s conservation team done in close consultation with Hesse’s assistants, her friends and experts on the pioneering artist.

“The rubber is darkened and it’s somewhat rigid, but the piece is now standing,” says Lena Stringari, the museum’s deputy director and chief conservator. “It’s gorgeous. It’s very powerful. The scale and absurdity that Hesse always spoke about is still there.”

Expanded Expansion is the only work by Hesse that the Guggenheim owns, acquired in 1975 through a donation by the artist’s sister Helen Charash. The museum first showed the sculpture in its 1972 memorial exhibition to Hesse, and last in 1988 in a collection show. Expanded Expansion was also publicly displayed during Hesse’s lifetime at the Whitney Museum’s landmark 1969 Anti-Illusion exhibition. A photograph from that year shows Hesse in a polkadot dress posing with the work, and its draped structure carries a translucent, gossamer quality.

The artist, who died of a brain tumour at age 34, hit her stride in the late 1960s, creating sculptures that pushed the rigid language of Minimalism with eccentricity and playfulness. Pivotal to her vision was her embrace of latex, a material she began using in 1967 after joining Experiments in Art and Technology, a group that brought together artists and engineers. But the material degrades quickly over time, tending to “get really dry and brittle”, says Michelle Barger, head of conversation at the San Francisco Museum of Modern Art, who has conducted extensive research on Hesse’s material use. “The kind she used regularly has a look of thin pancake batter when it comes out of the can.”

Hesse often brushed the latex on fibrous substrates like cheesecloth, canvas and rope, reflecting her training as a painter. Expanded Expansion, which was designed to be compressed or extended to a width of 30ft, is among her largest works and considered one of her most important.

“She loves to talk about contradictions in her work, and Expanded Expansion is a great example, both material-wise and conceptually, of the opposition of the strong and weak and hard and soft,” Stringari says. “She was really exploring the absurdity of what she was doing and trying to make works that she liked to think of as referring to ‘nothing’, that would have a sort of humour but at the same time be full of emotion.”

Restoration began in 2021 after the Guggenheim received funding for the undertaking from Bank of America’s Art Conservation Project. The museum’s objects conservator Esther Chao conducted tests with various fabrics and adhesives to simulate the ageing material, landing on a silk polyester to use as a kind of bandage. “It is a fairly minimal treatment for all the tears”, Stringari says. “What we were trying to do is create what is left of the translucency and not have any [visible] patches. We’ve done some softening so we can get some of the drape back.”

The exhibition, also titled Expanded Expansion, will pose questions about the legacy of an artist who died young with a fairly modest oeuvre. Hesse was well aware that her materials were impermanent but selected them because they delivered the results she wanted in the moment; she was less concerned about longevity. “At this point I feel a little guilty when people want to buy [my latex works],” she said in 1970. “I am not sure what my stand on lasting really is. Part of me feels that it’s superfluous and if I need to use rubber that is more important. Life doesn’t last; art doesn’t last.”

That has left institutions grappling with how to best represent her work, especially when displaying it may no longer be viable. “Her ambivalence is very clear, and we’re stuck in this ambivalence,” Stringari says.

Conversations about restoring Expanded Expansion have been ongoing for two decades, prompted by its potential inclusion in a Hesse retrospective at the San Francisco Museum of Modern Art in 2002, organised by curator Elizabeth Sussman. The San Francisco Museum of Modern Art hosted a roundtable to gather input from Hesse’s circle that included the artist’s sister, her assistant and conservators who specialise in rubber. Also present was Sol LeWitt, a close friend and confidant of Hesse’s, whom Barger recalls “felt like [the work] was a shadow of what it’s supposed to be”. To better understand the sculpture’s construction, the Guggenheim’s conservation department also worked with Hesse’s assistant Doug Jones in 2008 to create a mock-up of a section.

Adding to the complications of restoring Expanded Expansion is that Hesse designed it to be variable. It could have been elongated, compressed, wrapped around a corner or even placed on the floor. But latex cannot be brought back to life, and its rigidity limits that motion. To give visitors a sense of its past flexibility, photographs by film-maker Robert Fiore that document Expanded Expansion’s various positioning in Hesse’s studio will be on view in the exhibition. A film by Dorothy Beskind of Hesse in her studio and an unedited 1970 audio interview with Cindy Nemser will also offer insight into the artist’s creative process.

Other objects in the single-gallery show include preparatory drawings for Expanded Expansion and glass pastry cases filled with smaller experimental sculptures that the scholar Briony Fer has called “studiowork”. Hesse had given several of such works to LeWitt as gifts, and he placed them in a pastry case he found on Canal Street. “She liked that so much that she created more of those,” Stringari says. “You get a real sense of her working with materials, changing them and seeing what they do.”

The Guggenheim exhibition ultimately seeks to tell a timeless story: the complex afterlife of an object once subject to change beyond its maker’s control. “We don’t know what Hesse would think,” Stringari says. “We don’t know if she would not show it. You can imagine that if she lived, she would have had a huge production, and maybe this piece wouldn’t be as important as it is today.”