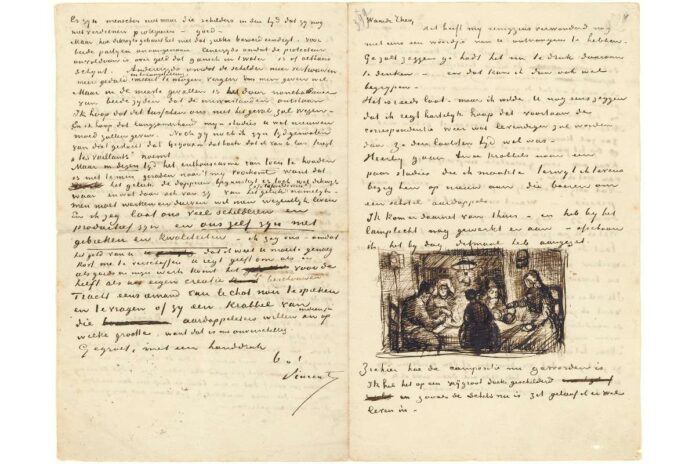 Much is known about Vincent Van Gogh’s amazing paintings. He is considered one of the most relevant figures in contemporary art. But, little known to a wider audience, however, is that he was an avid writer. In fact, the letter was so important to him. Van Gogh used it to articulate his own concepts, his hopes, dreams, details of life and love, and his ongoing struggle with mental problems.

After numerous Van Gogh exhibits, the Van Gogh Museum organized a new review of his work, entitled “Loving Vincent: Van Gogh’s Greatest Letters”, in order to confirm the significance of his letters in the context of the artist’s entire work.

The museum houses a large collection of eight hundred and twenty Van Gogh’s letters, most of which were written to his brother Theo. Huge production helps us better understand who the great artist was. Van Gogh expressed himself in an emotional manner, talking about himself and the practices of other artists, as well as the torment that gradually choked him as he suffered from loneliness and depression.

Along with other letters of Vincent Van Gogh and some of his masterpieces, such as The Potato Eaters (1885) or The Sea View at Scheveningen (1882), this exhibition presents for the first time a letter from Vincent Van Gogh and Paul Gauguin, written in 1888 by Vincent Van Gogh. It tells that both artists are staying at the house of their friend the artist Emile Bernard in Arles.

The letter reflects the scale of the dialogue between Van Gogh and Gauguin and is the only letter that the artist wrote to another artist.

The Van Gogh’s letters exhibition is accompanied by an extensive publication entitled Life in Letters, published by the Van Gogh Museum in collaboration with Huygens ING, which will include Van Gogh’s complete correspondence. The Van Gogh exhibit tends to introduce a wide audience to these surprising and rather intimate documents revealing the inner process of the iconic modernist master.

It is hard to believe that although Vincent Van Gogh’s paintings are practically priceless today, his art remained unrecognizable during his lifetime. Van Gogh has created a phenomenal number of unusual works in the last decade of his life. During this period, Van Gogh also wrote hundreds of letters, mostly to his brother Theo Van Gogh, who acted as his patron and art dealer.

Van Gogh also corresponded with family members, including his mother and sister Wilhelmina, and other artists such as Paul Gauguin and Emile Bernard. Van Gogh’s letters, more than seven hundred in total, were collected by Theo’s wife, Joanna, and published in 1914 in several volumes.

Although Vincent Van Gogh was well versed in literature and art history as an artist, he was largely self-taught and, judging by his early work, was hardly a born draftsman. The creative upsurge of the last few years, during which many of his famous paintings have been produced, is best understood in the context of many of the trials that preceded them.

This struggle is detailed in Van Gogh’s letters, a testament to his relentless pursuit of technical skills such as figure modeling and perspective.

At the same time, Vincent Van Gogh’s letters show the evolution of his theoretical principles. Van Gogh’s insightful observations about artistic role models like Millet and Delacroix certainly don’t sound like a madman. However, this sophistication is always contrasted with a strong work ethic inspired by more humble pursuits.

A selection of excerpts from Vincent Van Gogh’s writings, alternately brooding and vicious, passionate and elegiac, is intended to convey a fuller sense of the odyssey of this iconic artist. Van Gogh’s own words, illustrated by his own hand, belies his reputation as a maniac and does justice to his flamboyant and joyful works of art than the caricature that has dominated public opinion for so long.

Van Gogh’s letters show the artist as a person who is completely and unselfishly devoted to his work. Van Gogh’s letters are a brooding autobiography. Anyone familiar with the drawings and paintings created by Van Gogh during his short, eventful life will find that Van Gogh’s letters emphasize many facets of his personality that are assumed by his work as an artist.

Van Gogh suffered from frequent mental breakdowns, especially in the second half of his life. Letters of Vincent Van Gogh captured the mind, which is never relaxed, and the soul, suffering from acute loneliness and self-doubt.

Van Gogh’s letters reveal his stunning artistic genius, the evolution of his theoretical principles, his formidable intellect, and his strong work ethic. In many of his letters, Van Gogh describes the progress of his work with painstaking detail and beautiful prose. He often included sketches for paintings that he had already begun or reflections on works that he hoped to someday create.