Home News The Bob Marley ‘One Love’ Immersive Experience Will Touch Down in Los... 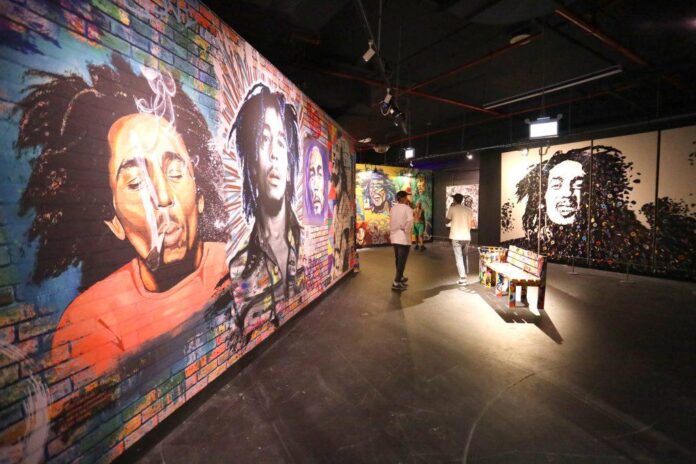 Around the corner from Bob Marley’s permanent star on the Walk of Fame in Los Angeles, a vast immersive exhibition celebrating the musician’s legacy will take up temporary residency at the Ovation Hollywood. The show begins on January 27, 2023, and will run for 12 weeks.

The “Bob Marley One Love Experience” debuted at London’s Saatchi Gallery in February 2022 before embarking on a multi-city tour, one to rival the reggae pioneer’s own. Los Angeles represents the third stop, following Toronto, and will present audiences with Marley memorabilia, one-of-a kind immersive spaces, and, of course, music. Good vibes are included.

The exhibition has been produced by the Marley Family and Terrapin Station Entertainment, a division of Sony Music Entertainment. Inside the 15,000-square foot space, the organizers will curate concert footage, personal items such as lyric sheets and soccer jerseys, and artwork inspired by the singer to create a broad picture of one of the enduring cultural icons of the 20th-century.

Two immersive elements stand out: the One Love Forest, a multisensory venture through Jamaica which includes a large cannabis garden, and a space called the Soul Shakedown studio where visitors don headphones and join a silent disco.

A post shared by The Bob Marley Foundation (@bobmarleyfoundation)

Ahead of the January opening, the organizers are hosting a pre-party including performances from Skip Marley, the legend’s grandson. More events have been promised for February to coincide with the singer’s birthday on February 7.

“The ‘Bob Marley One Love Experience’ has already created so many positive vibrations for fans in London and Toronto,” said Jonathan Shank, director and producer of the exhibition. “It’s an honor to continue to have the opportunity to curate and produce the exhibit right in the heart of Hollywood.”

“One Love Experience” join the wave of immersive exhibitions that arrived in Europe and North America en masse as Covid restrictions loosened in 2021. The installations, powered by 3D mapping projections, range from art-focused journeys through Van Gogh and Claude Monet‘s landscapes to explorations of Disney’s cinematic universe and the Titanic. Earlier this year, “Wake Me When I’m Free,” an immersive tour through Tupac Shakur’s life and work, welcomed more than 150,000 attendees during its five-month run at L.A. Live.

Common to most of these experiences are extensive gift shops and tickets priced higher than the average museum entrance. Tickets for the “One Love Experience” begin at $37 and go on sale from December 7.

Who Was the Marquise de Grollier? A Work by the 18th-Century Woman Once Called ‘the Raphael of Flower Painting’ Just Entered the Met’s Collection

Ahead of Its Reopening, Buffalo AKG Art Museum Rolls Out Its First Online Exhibition Dedicated to NFT Art