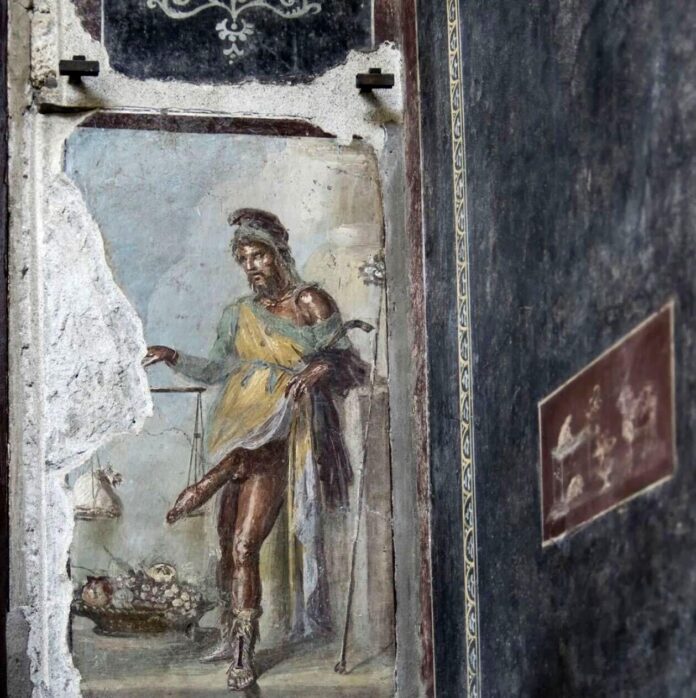 The home, thought to have been constructed in the second century BC, was owned by Aulus Vettius Restitutus and Aulus Vettius Conviva, who became rich by selling wine after being freed from slavery.

A fresco at the entrance depicts Priapus, the god of fertility, with a huge penis resting on a weighing scale also loaded with money; the mural reflects the owners’ wealth while Priapus was also thought to ward off evil. In the dining room, known as the Hall of Pentheus, a fresco depicts the Greek hero Hercules as a child, crushing two snakes.

“They [the owners] evidently tried to show their new status also through culture and through Greek mythological paintings,” Zuchtriegel told the Associated Press (AP).”‘It’s all about saying, ‘We’ve made it and so we are part of this elite’ of the Roman world.’”

The residence “represents the Pompeiian domus par excellence, not only because of the frescoes of exceptional importance, but also because of its layout and architecture”, Arianna Spinosa, Pompeii’s director of restoration work, told AP.

Stefania Giudice, the director of fresco restoration, revealed also that paraffin was used to try and conserve the frescoes over the years but this resulted in them becoming “very blurred”. The process caused layers of wax to form on the walls, which preserved the frescoes.

The house renovation project is the latest phase in the revamping of Pompeii. Late last year archaeologists at the ancient site unearthed a series of rooms in a residence belonging to a middle-class family whose household items were buried in the volcanic debris.