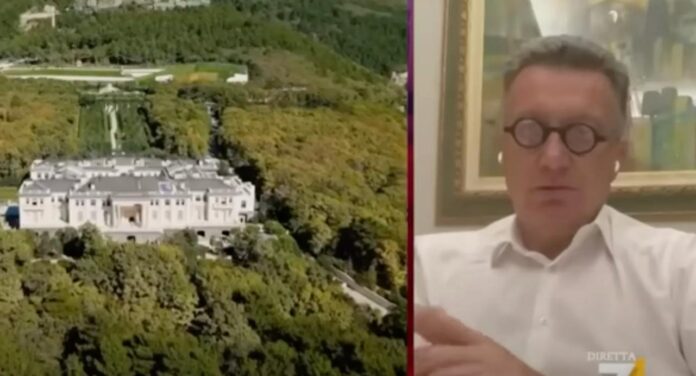 Lanfranco Cirillo, an Italian art collector who designed a mysterious 18,000 sq. m Black Sea mansion supposedly built for the Russian President Vladimir Putin, will be tried in absentia by an Italian court on financial charges next month. In an interview published by the ANSA news agency on Friday, the architect said that he currently resides in Moscow and claimed that an Interpol Red Notice effectively prevents him from returning to Italy to defend his name.

Cirillo, 64, is being investigated for crimes including fraudulent tax returns, money laundering, the illegal transfer of funds and violation of the code of protection of cultural heritage. His trial will open in Brescia on 23 February, the eve of the first anniversary of the Russian war in Ukraine. Two Russians and three Italian citizens, including Cirillo’s wife Marinella Spagnoli, will also go on trial.

Prosecutors have reportedly entrusted property seized from the architect last year—including paintings by Pablo Picasso, Paul Cézanne, Wassily Kandinsky, Giorgio de Chirico and Lucio Fontana—to the Brescia-based accountant Maria Elisabetta Roncato until after the trial, Il Giornale di Brescia reports. Contacted by The Art Newspaper, Roncato confirmed that she has been nominated “temporary custodian” of the works and described herself as “an external consultant” but declined to comment further.

Cirillo, who has denied any wrongdoing regarding Italian taxes, has previously vowed to collaborate with prosecutors until he has cleared his name. In written comments sent to The Art Newspaper, Stefano Lojacono, a lawyer representing Cirillo, confirmed that the architect was questioned twice by Italian officials in February 2022 and was requested to be questioned a third time in March of that year.

Cirillo told ANSA that he had been advised not to travel to Italy because of the Interpol Red Notice, an international law enforcement request calling for the location and provisional arrest of a person pending extradition. He added: “this situation effectively deprives me of my right to defend myself in the courtroom”. The architect also questioned why the notice had been issued “when the Italian judicial authorities don’t need to search for me because they know very well I am based in Moscow”.

Earlier in the year, we reported that Italian authorities raided Cirillo’s villa in Roncadelle near Brescia for allegedly failing to pay a €50m tax bill and, in a subsequent seizure, confiscated assets worth $144m, including jewels, cash and around 150 artworks. Marco Tolla of the law enforcement agency Guardia di Finanza told The Art Newspaper at the time that the artworks may be permanently confiscated and donated to Italian museums.

Born in Treviso, Cirillo claims that he became a resident of Russia in 2003, an honorary citizen in 2014 and has designed buildings for over 40 Russian billionaires, as well as companies such as Gazprom and Novatek. He told ANSA that his Russian assets include the entire 51st floor of the Imperia skyscraper in Moscow, measuring 4,000 sq. m, and a 400-hectare space in which he produces wine. Putin has denied any connection with the Black Sea palace.