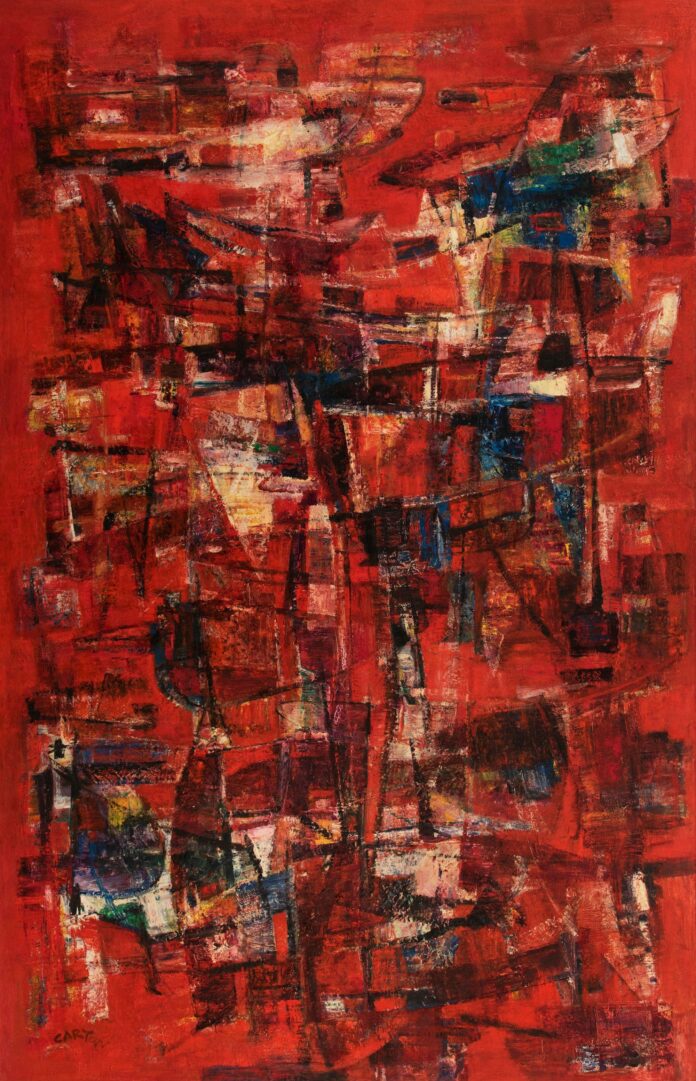 When painter Norman Carton (1908-1980) exhibited Hildring #625 (around 1954) at the 1955 Whitney Biennial, a vertical canvas gridded with expressive gestures, it hung among works by peers such as Grace Hartigan, Hans Hofmann, Franz Kline and Joan Mitchell. The large-scale painting hasn’t been public displayed since, but is now headed to the Art Miami stand of New York gallery Hollis Taggart, alongside works by his contemporaries Albert Kotin (1907-1980) and Sheila Isham—all newly represented by the gallery.

The estates of first-generation Abstract Expressionists Carton and Kotin have not had cohesive gallery representation in the four decades since their deaths, and the work of nonagenarian Colour Field painter Isham is sporadically shown. Taken together, dealer Hollis Taggart’s addition of this post-war trio to its roster reflects its goal of reviving market and scholarly interest in overlooked historic artists.

“Our mission is to take these people who really weren’t self-promoting and didn’t have longevity in the marketplace like some of the other bigger names, but deserve to be looked at again with a fresh eye,” Taggart says.

The gallery is exhibiting three works by each artist at Art Miami (29 November-4 December). An abstract tondo by Isham, A Lifeless Wave (1978), shows her mastery of both the circular format and subtle colour variations. Three Kotin canvases of the late 1940s and early 50s demonstrate his fusion of free-flowing lines with rough swaths of colour. Carton’s Hildring #625 will be shown with his canvases of the 1950s and 60s.

Isham, who will be featured in an extensive, career-spanning solo show at the gallery in February 2023, incorporated varied influences such as Chinese calligraphy and Buddhism. Her works are in the collections of the Museum of Modern Art (MoMA) in New York, the National Gallery of Art and the Smithsonian’s Hirshhorn Museum and Sculpture Park in Washington, DC, among others.

Carton was a Ukraine-born painter who worked for the Works Progress Administration in the early 1940s and exhibited extensively in New York and Philadelphia. An art educator for much of his life, Carton taught at the New School.

Belarus-born Kotin studied under Hans Hofmann and was among the jury-selected artists to participate in 1951’s landmark Ninth Street Show, considered the debut of Abstract Expressionism. In Kotin’s lifetime, his work was also shown at MoMA, the Stable Gallery and the Library of Congress.

“The common thread is that they are considerably talented artists in their own time, well represented in important exhibitions, well represented by important galleries and then were sort of lost and forgotten over time,” says Taggart. “Our gallery is very interested in these holes, these little pockets in the art history of America, especially Abstract Expressionism. They’re holes that need to be filled. It’s more interesting to us to do that than to chase after the obvious, repetitive names that you see over and over again.”

These three artists became obscure for different reasons. Isham frequently changed styles and relocated, and though she was dedicated to her craft, her financial stability meant that she didn’t have to sell work to support her practice. Taggart believes that Carton and Kotin were quieter personalities, and Carton avoided the famed Cedar Tavern network where more prominent Abstract Expressionists held court

“The 1970s and late 60s were not kind years to most Abstract Expressionists,” adds Jake Carton, son of the artist, about the decades when his father turned instead to teaching. “He also had an aversion to the growing commercialised art world.”

Though the legacies of Isham, Kotin and Carton waned, interest in their historic moment has not. “Abstract Expressionism is a long-lasting legacy in American art history, and will be for some time,” says Taggart, whose gallery roster includes many of the underappreciated members of this movement, an area of focus that is also partly motivated by practical considerations. “As people get priced out of the big names, they still want quality works from the same period by artists who are more affordable and of equal caliber.”

Through his streetwear collaboration, Pope.L dispenses some Supreme career advice