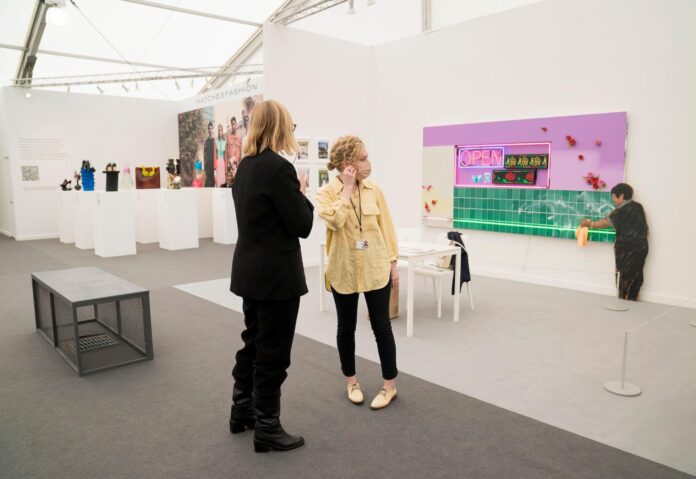 The fourth and largest edition of Frieze Los Angeles will touch down at Santa Monica Airport next year (16-19 February 2023), with 24% more exhibitors than the fair’s 2022 edition, which was held at the Beverly Hilton in Beverly Hills. The fair will include a larger cohort of galleries offering 20th-century works than in years past, which have tended to privilege contemporary art almost exclusively.

The fair’s Focus section, devoted to galleries founded in the previous 12 years and consistently its strongest curatorially, will expand its purview from exclusively presenting Los Angeles galleries to showcasing spaces from across the United States. It will be co-curated by Amanda Hunt (formerly of the under-construction Lucas Museum of Art, newly at the Walker Art Center in Minneapolis) and independent curator Sonya Tamaddon. Still, the bulk of the sector’s galleries (12 of 16) are based in or have locations in Los Angeles—including Stars, Parker Gallery, Ochi Projects and Anat Ebgi. They will be joined by galleries from Minneapolis (Dreamsong), Chicago (Patron) and New York (regularnormal, Hannah Traore).

Frieze Los Angeles was held on the Paramount Studios backlot in its first two years (2019 and 2020), before shifting to a vacant lot adjacent to the Beverly Hilton hotel in 2022. The fair’s 2021 edition was cancelled due to Covid-19, and plans for a decentralised edition spread across historical Los Angeles homes that year proved too complex to pull off amid pandemic restrictions. The 2022 edition’s off-site public art programme was cancelled at the last minute due to logistical challenges in getting the large-scale works on-site in time.

This will be the fair’s first outing at Santa Monica Airport, although structures designed by the same architects as the tents of years past, Kulapat Yantrasast’s WHY studio, will provide some structural continuity. The fair will be concentrated primarily in the airfield’s southeast corner, with additional activations across the facility. The short-lived New Los Angeles International Contemporary Art Fair was previously staged at the airfield’s Barker Hangar, a popular event space.

The move marks a major shift for the fair, previously held in the comparatively more central areas of Hollywood and Beverly Hills, relatively near some of the city’s largest concentrations of art galleries. Christine Messineo, Frieze’s director of the Americas, said in a statement that with the move to Santa Monica, “we will also push beyond the borders of the fair and encourage our visitors to explore everything Los Angeles’s West Side has to offer, from major institutions to smaller spaces that form the fabric of the city’s art community”.

It Turns Out Jeff Koons, Pace, and Other Art-World Heavyweights Had Millions of Dollars in PPP Loans Forgiven by the Government