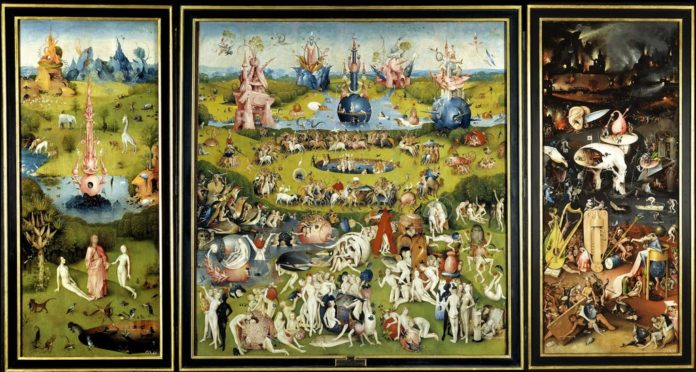 I love music and I love Bosch. But Bosch polyphonic music did not approve, considered it an invention of the devil and sent all the musicians to Hell. However, he also sent himself from there. He probably liked the music secretly, especially when he was drunk. How can this be understood? In his paintings. But first things first.

A drunken master will still appear in our history. Yerun Antonison van Aken, so actually called Jerome Bosch (Hieronymus Bosch, circa 1450-1516). Even his real name today remains a mystery to many. What can we say about his paintings? The real names of the paintings have not reached our days. And the symbols that we see in the works of the master? Over time, many of them either changed their meaning or were lost. For most of the people, Bosch turned into a cool artist, depicting all the psychedelic garbage. And this is just not the case.

Hieronymus Bosch was a very educated man of his era. His paintings – the deepest level of the text. It is the text, because of Bosch, first of all, belongs to the book culture, at the head of which was the Bible. Unlike many of his contemporaries, the artist was a literate man, well versed in the sacred scripture. The main task of his work is to convey the content to the masses. It is natural to show people the whole meaning of the main book of Christianity. Almost all of his canvases are triptychs. This is a multi-level text, which we must take in stages, like a novel. Only then can we discover its meaning. Let’s read Bosch! Here I will allow myself a little digression. If you want to get acquainted with the master’s canvases, go to the museum in his native Hertogenbosch in Holland. There though copies of works, but they can be touched. Open and close. In the Prado, you will not be so definitely allowed. And there are no crowds of tourists, you can consider everything in detail. 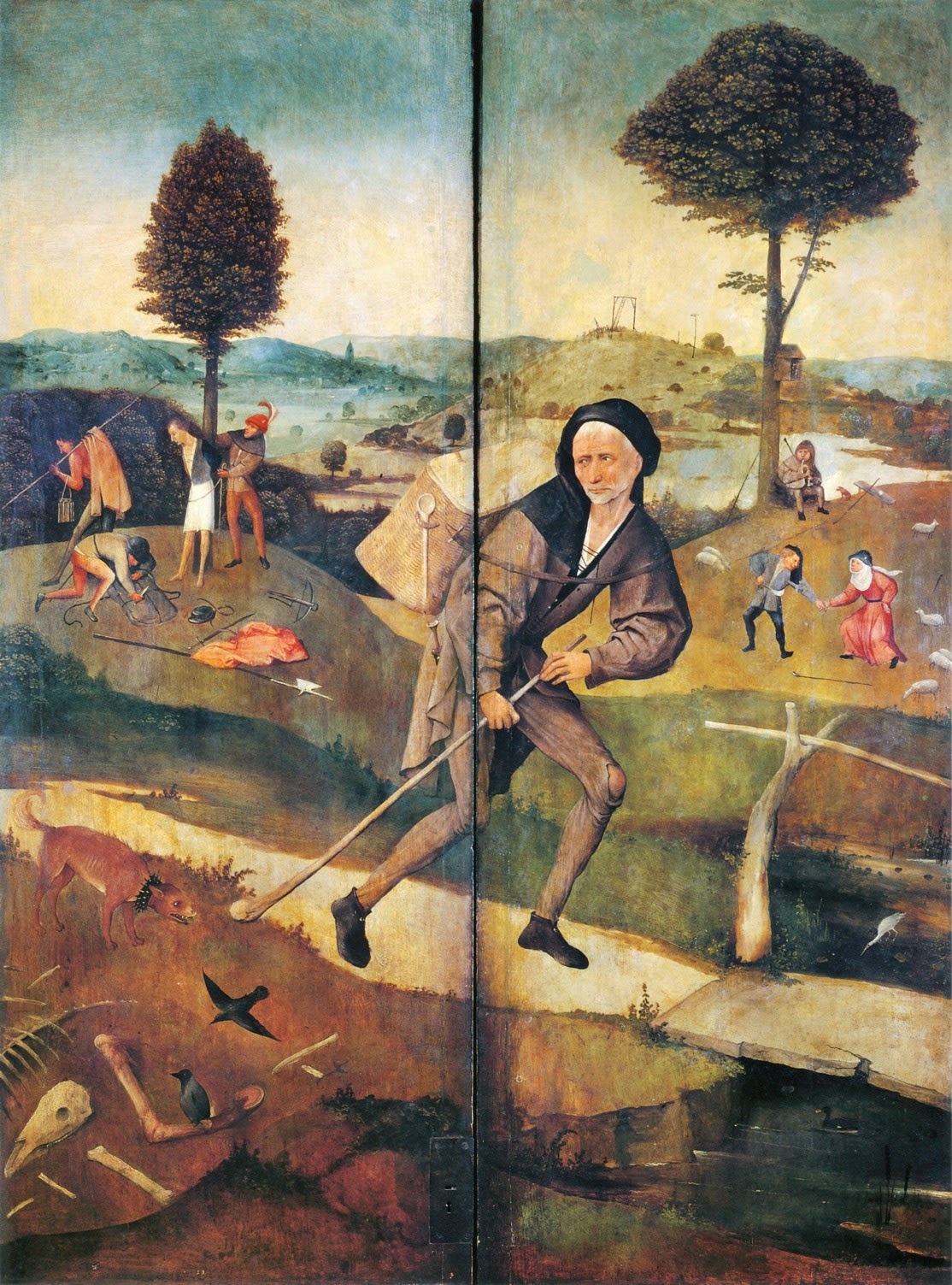 Let’s start with his triptych “Voz sena”. The valves are closed, and we see an image called “The Traveler”. And this is the first inaccuracy introduced by time. Ordinary travelers of Bosch did not care. Here we are talking about something else. We see explicit references to the biblical parable “About the Good Samaritan”. He was the only one who stopped to help a man robbed and beaten by robbers. But here we see another point. The decision has not yet been taken. The man stopped, but he is confused, does not yet know what to do: help or go further. By the way, the figure of the traveler in the picture is a portrait of Bosch himself. The artist was a regular character of his own canvases. The picture does not give any answers, the choice is yours, and you open the doors. 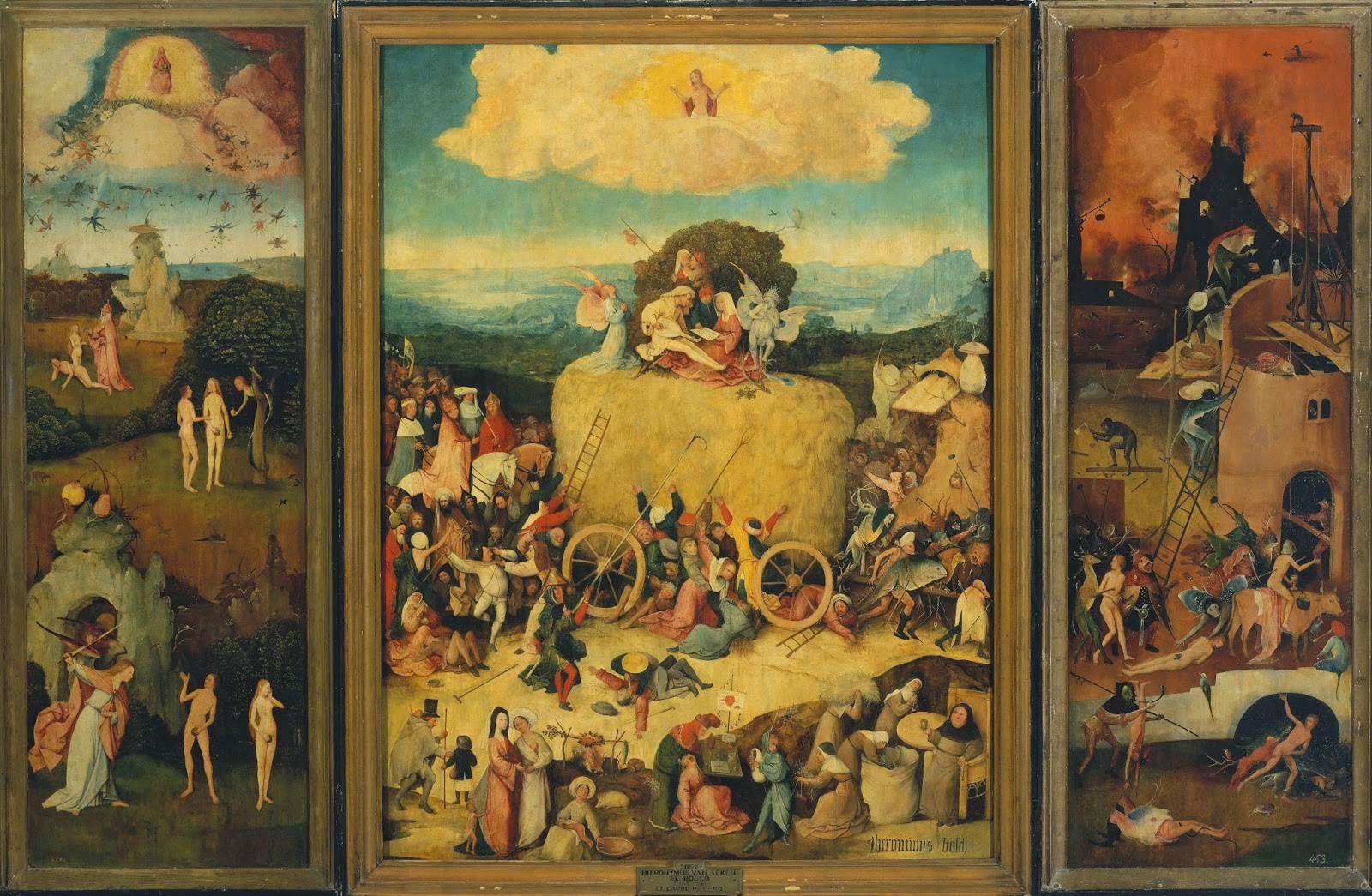 The left part is the story of Adam and Eve in Paradise. And again the choice, the consequences of which are the expulsion of the first people from Eden. History moves on. In the central part we see the sun. This, perhaps, is one of the most interesting allegories of human life. We see how everyone is trying to get on this cart. He is a reflection of human happiness, an ideal, a limit of dreams. For the sake of their goal, people kill each other, they fight, they are ready to be under the wheels, to be crushed. Everyone looks only at the top of the cart, but no one sees that instead of horses in the wagon harnessed. They roll it to Hell. Bosch mocks kings and bishops, over ordinary people, over false prophets and robbers. They are all blind. All of them come across a simple trick. None of them can look higher to see over this whole world of the Savior. Their choice is to choose a more intimate and understandable, not to notice the essence. Until the last do not believe in a nightmare. And the nightmare is very close. Life is short, and they all come here. Rise with hay follows without stopping to the station “Ad”. On the right wing is the final destination. Therefore, when we close the triptych again, our mind already has the answer to the question: “How should the Samaritan act: pass by or help?”. The path to salvation is a selfless help to one’s neighbor. The fact that Bosch perfectly knew the scriptures is confirmed by his unusual depiction of objects and animals mentioned in the Bible. Take, for example, his painting “St. John the Theologian on the island of Patmos. ” What kind of incomprehensible figure is located in the lower right corner? What is its symbolism? 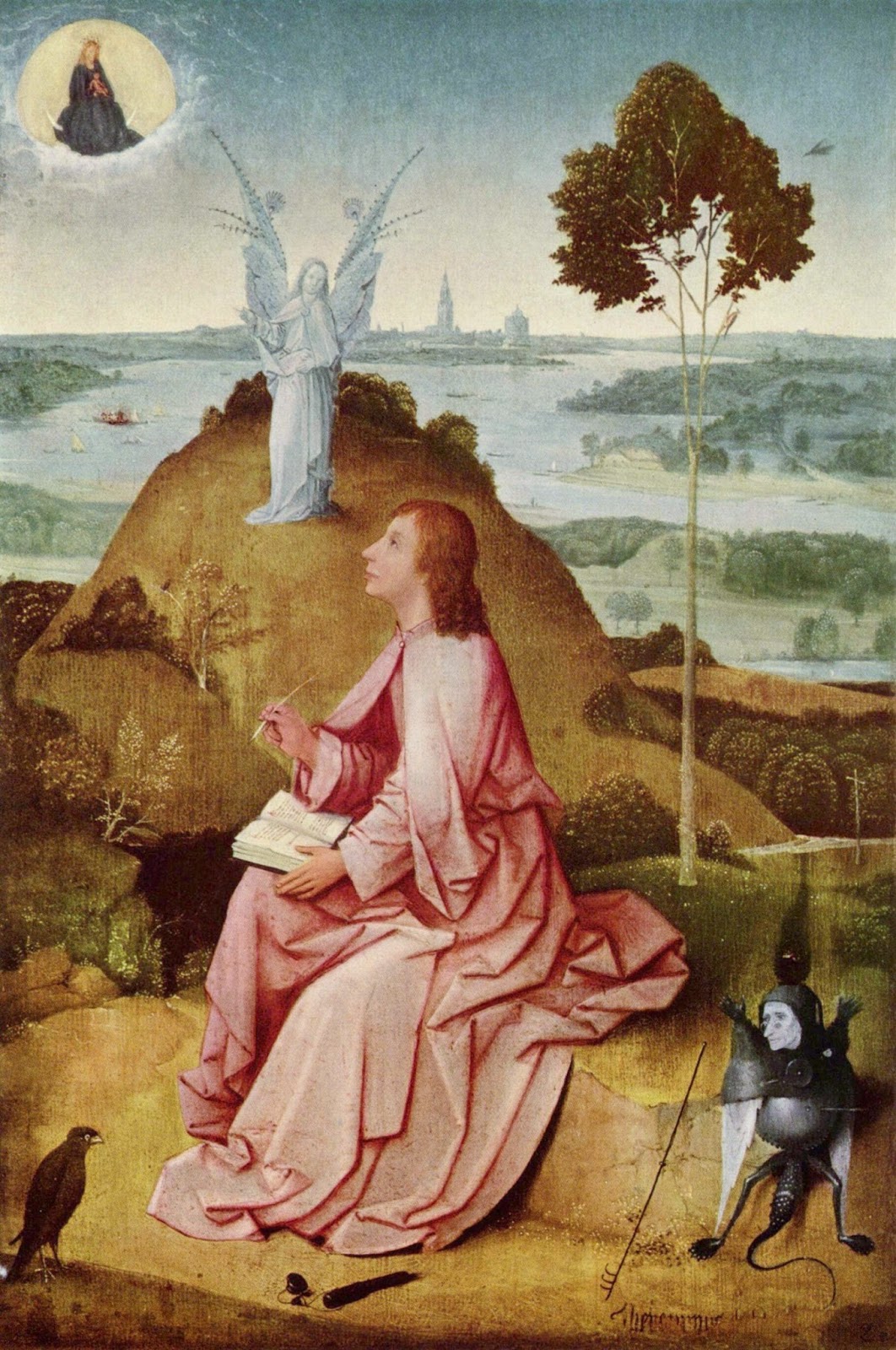 It becomes clear if you look at the source. We open, we read: “In appearance, the locusts were like horses prepared for war; And on her head, as it were, crowns like gold, her faces are like human faces, and her hair is like the hair of women, and her teeth were like those of lions. On it was armor as if armor iron and the noise from her wings is a knock from chariots when many horses run to war; she had tails like scorpions, and her stings were stinging … “Here is the explanation for you. It’s a locust. Hieronymus Bosch did not refer to the biblical text as a metaphor. For him, it was the truth in the last resort. Even the amusing facts related to the inaccuracy of the translation of the Holy Scriptures into Latin came to pass. In two parts of the triptych “Garden of Earthly Delights” in the middle, we see a fountain. The fact is that St. Jerome when creating the Latin translation of the Bible, replaced the word “source” with the “fountain”. Bosch did not know what the last looks like, so he turned on his imagination. But about this picture, the master exactly needs to tell more. 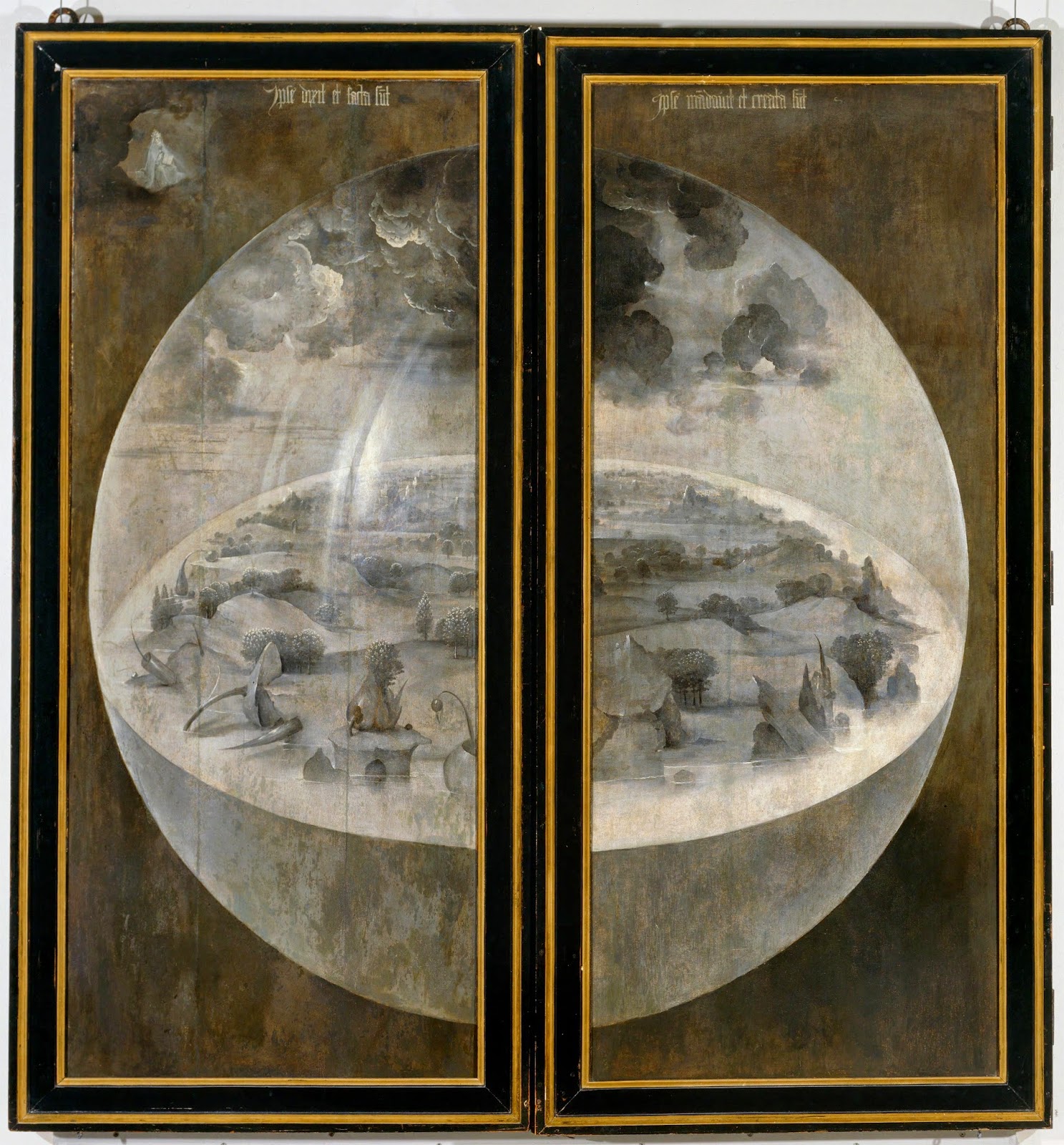 We have closed doors again. This is the stage of creation of the earth. In the upper left corner is God himself, his gaze is fixed in the book. In the realm – a flat land, just created by him. The world is a book written by the hand of God. Two inscriptions on top are translated thus: “He said – and it did”, “He commanded – and it was.” Before we are a clear reference to the Gospel of John and the idea that it all began with the word. We open the doors … We see how animals are born and called Adam in Paradise, in the center – an allegorical image of the joys of life, and on the right is the result. The result is disappointing. 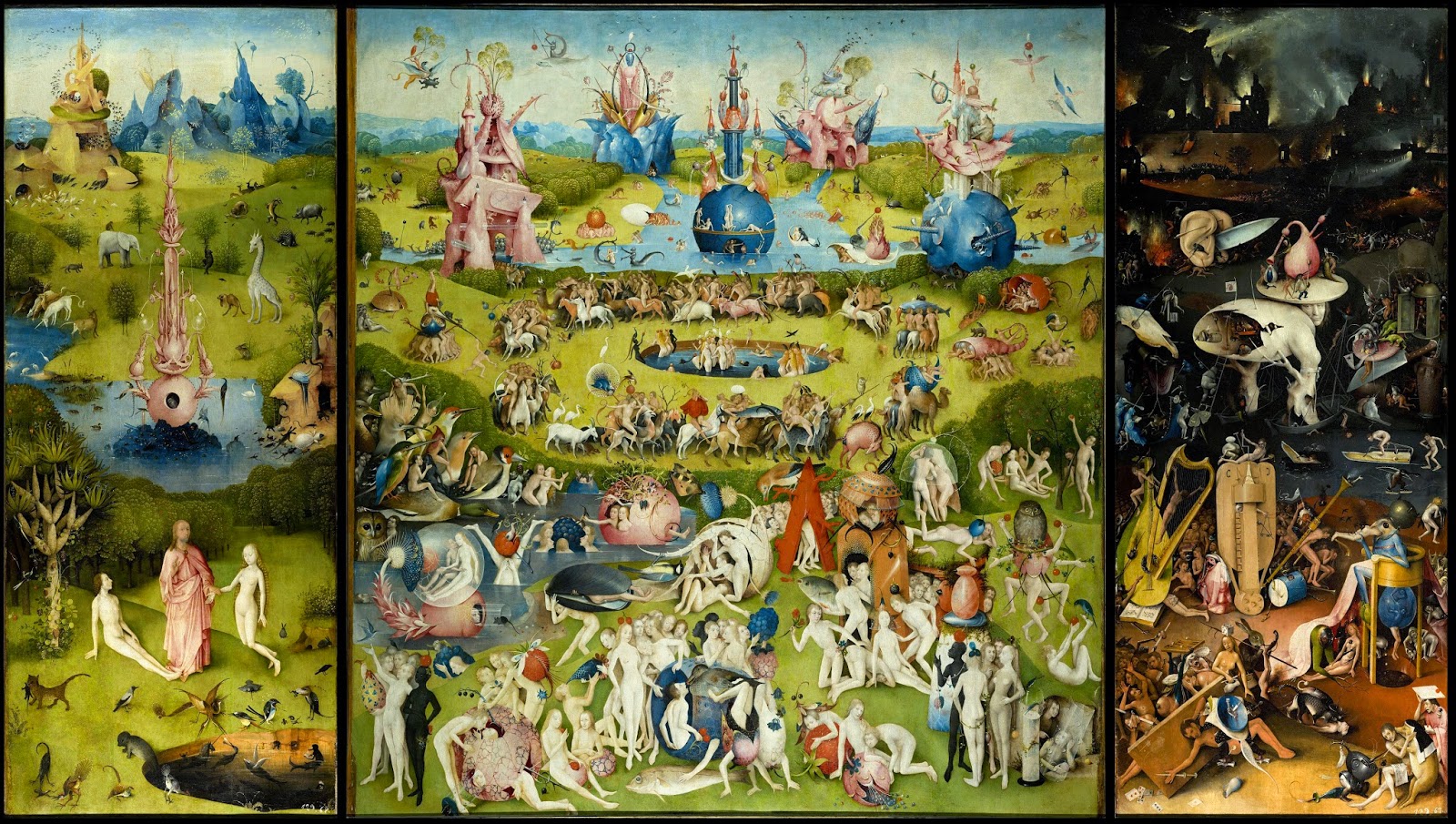 In the foreground we have musicians. I have already said that Bosch considered polyphonic music to be the creation of Satan. So he put a whole orchestra in hell. One note was written right on the fifth point. The rest play on them. Only now their game is no longer a pleasure, but torture. And above and the artist himself. Here is his big face looking directly at us. 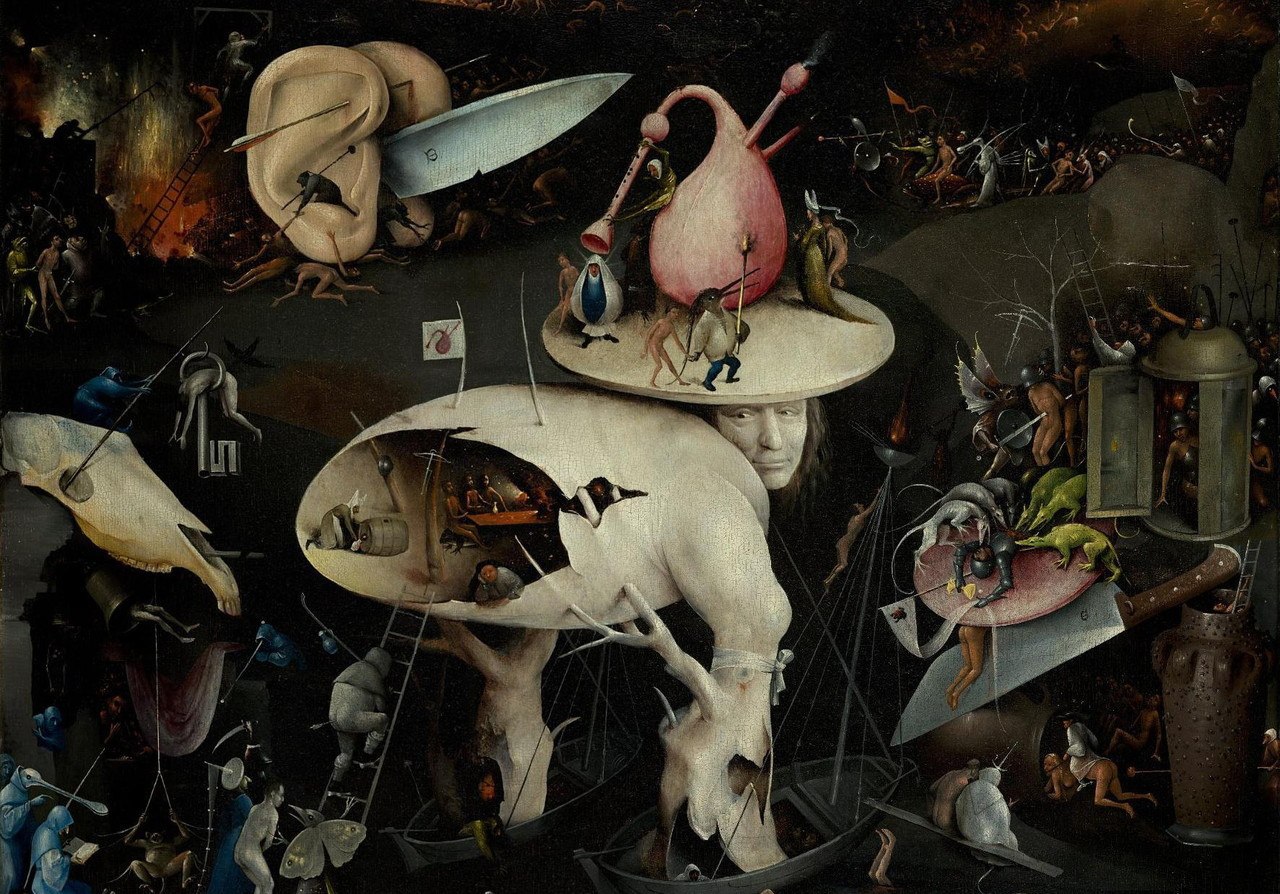