Home Exhibitions AS THE PREFIGURATION FOR A NEW SEASON OF A SUMMER IN LE... 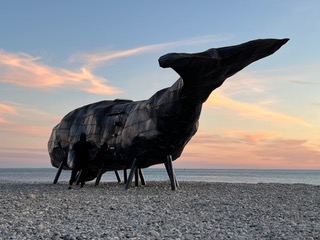 Joep Van Lieshout is a Dutch artist who lives and works in Rotterdam. Regularly appearing on every contemporary art scene around the world, he has exhibited everywhere from New York to Venice, from Shanghai to Sao Paulo. His imposing projects transcend the disciplines to encompass art, design, and architecture. In 1995, the artist founded Atelier Van Lieshout, which then became his sole signature a strong statement opposing the myth of the artist as lone genius. AVL enjoys an international reputation for his sculptural installations, which are characterized by their provocative and mischievous tone and by their controversial dimensions. A number of recuring themes resonate

FACING THE SEA: THE WHALE

To illustrate his obsessions, Atelier Van Lieshout chose to produce a great, 14-meter-long sperm whale in Corten steel that will be exhibited on Le Havre Beach from June 3 to September 2, 2022. Drawing inspiration from Herman Melville’s philosophical novel, Moby Dick, now considered a masterpiece of American literature, Atelier Van Lieshout, like Melville, strives to present the sea as the true theatre of the human comedy: suffering, wickedness, pride, madness, tyranny are all personified in the figure of Captain Ahab, who seeks revenge on the whale that had taken his leg in the past. The obsessive pursuit leads to his doom.

“Aye, aye! and I’ll chase him round Good Hope, and round the Horn, and round the Norway Maelstrom, and round perdition’s flames before I give him up. And this is what ye have shipped for, men! to chase that white whale on both sides of land, and over all sides of earth, till he spouts black blood and rolls fin out ” Moby-Dick.

But the huge sperm whale lying on the pebbles of Le Havre Beach is also a manifesto on the power of nature that Jonah had experienced. This Biblical prophet provoked God’s wrath by refusing to obey Him:

“But the Lord provided a large fish to swallow up Jonah; and Jonah was in the belly of the fish three days and three nights.” (Jonah 1:17, New Revised Standard Version of the Bible, 1989.)

From the Middle Ages on, the great fish of the Bible became a whale, the invincible instrument of divine punishment. The Whale illustrates both Ahab’s nemesis and Jonah’s imprisonment. Made of steel, a metal created and welded by man, this whale is not slaughtered for its oil, as of old, but rests on the beach pebbles like a careened ship. A seated man can be seen through the portholes. Is it the artist, Jonah praying for his salvation or captain Ahab questioning his behaviour Thus presented, the work embodies both human ingenuity and unconquered nature. Therein lies all its ambiguity.

GROUPE PARTOUCHE: A KEY PLAYER ON THE ART SCENE

Groupe Partouche is one of the main private partners in the cultural world in France: it is the patron of the Festival d’Art Lyrique in Aix-en-Provence, the Biennale d’Art Contemporain de Lyon, the Antibes-Juan les Pins jazz festival, and many others. In 2006, as owner of the Grand Casino du Havre, it launched the Arts Le Havre Biennial of Contemporary Art, under the direction of Linda Morren. These biennials continued until 2012, welcoming such world-renowned artists as Gilbert & George, Edward Rush, Jean- Michel Alberola, François Morellet, and Wim Delvoye, and many more. In 2014, as part of the agreement between the Grand Casino du Havre, owned by Groupe Partouche, and the city of Le Havre, the two partners wished to transform the concept of the biennial into a yearly artistic event, now run and financed by the Grand Casino du Havre. Morren thus continued the artistic endeavour of the previous biennials by inviting major artists, among them Kurt Henstshläger on the Volcan,2017 and Fabio Viale, Villa Maritime, 2021. As part of the contributions of Groupe Partouche to the development of quality artistic activities, Linda Morren is proposing an exceptional collaboration with Atelier Van Lieshout, who already made an appearance in the second edition of the Biennial in 2006.

A SUMMER IN LE HAVRE: AN AMBITIOUS APPOINTMENT WITH CONTEMPORARY ART

The city rebuilt by Auguste Perret has been listed among world heritage sites since 2005, a clear sign of its exceptional cultural value. “The of-a-kind urban fabric marrying the qualities of a traditional and a modern city. ”Today, the city has lost none of its modernity as it welcomes all types of artists. It is a long awaited meeting with contemporary art heritage and culture which is held every year in Le Havre. The summer brings new contemporary works to the public space. Thanks to the intervention of internationally renowned artists, such as Vincent Gavinet, HeHe, Fabien Mérelle, Stephan Balkenhol, Henrique Oliveira, Stéphane Tidet, Erwin Wurm, Jace …Many are those who take advantage of A SUMMER IN LE HAVRE and marvel at the seaside. Le Havre attracts and seduces thanks to a festive, cultural and sporting character of this destination. Over the years, a permanent collection has been built up, gradually transforming the city into an open-air contemporary art exhibition, accessible to all.

A Basquiat You Can Wear: The Late Artist’s Sisters Have Tapped 9 New York City Designers to Reimagine His Art as High Fashion