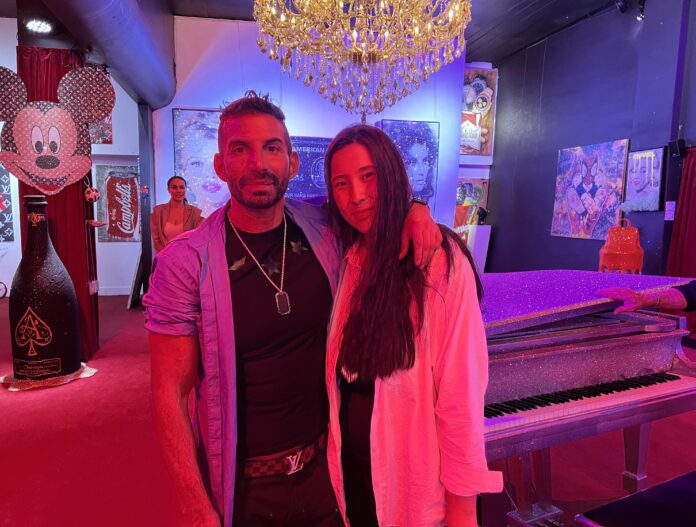 The contrasting artwork of Nazym Rakhimberdiyeva and Kfir Moyal may at first seem an unlikely combination for an exhibition, yet the recent showing of these two great artists together at Moyal’s gallery in Miami Beach, Florida, could not have been a greater success.

While Moyal is established as an artist dealing in pop art and having had commissions from celebrities such as Drake, Cardi B, the Kardashians, Paris Hilton, and many more, Nazym Rakhimberdiyeva has launched onto the art world in style with her series depicting the lives, culture, and mythology of her ancestors, the Tengri people of Central Asia.

A nomadic people with a rich cultural heritage, Nazym Rakhimberdiyeva sets out to celebrate a little-known tribe whose values involved respect for nature and the world around them, and her work reflects this perfectly in the colours and scenes of the various Gods and deities involved in Tengri life.

The joint Moyal and Nazym Rakhimberdiyeva exhibition attracted a phenomenal 20,000 visitors across the four days it was open, including celebrities, art lovers, and art historians keen to view the work of this talented young lady who hails from Kazakhstan. Recognized as a gifted child in terms of art from a young age, Rakhimberdiyeva originally attended a school for gifted children and honed her musical skills.

She soon recognized that her talents went beyond music and wanted to extend her reach into the visual arts. Her interest and respect for the history and culture of the Kazakh people – and especially of the nomadic Tengri – led her to concentrate on depicting episodes and representing the history of these overlooked yet important people.

Tengri culture believes that man and nature are governed by guardian spirits and that man and nature should be at one. Her work delicately yet clearly embraces this ethos and outlines the difference between the Tengri love for nature, and our current approach. These are works of great intricacy, of contrast, and images that draw one into the fascinating world of Nazym Rakhimberdiyevas nomadic ancestry.

The daughter of steppe nomads herself, Nazym Rakhimberdiyeva is keen to put the Tengri back on the map with her quite wonderful images, and alongside the sparkling pop culture work of Moyal, they made a compelling exhibition that contrasted the modern with the ancient. Many an appreciative word was given to Nazym Rakhimberdiyeva and her work in what was a ground-breaking joint venture between artists who clearly have their own specific ideology.

Moyal’s ability to mix with A-league stars of screen, sport, and the media leant Nazym Rakhimberdiyeva a fresh platform on which to spread her word, which – in her own quote – is ‘to make the world a more beautiful place.’ To the Tengri, of course, the world was a beautiful place and this young lady’s work shows this to a degree difficult to express in other than images. By bringing the Tengri world to life, Nazym Rakhimberdiyeva takes us back to a very different time and place.