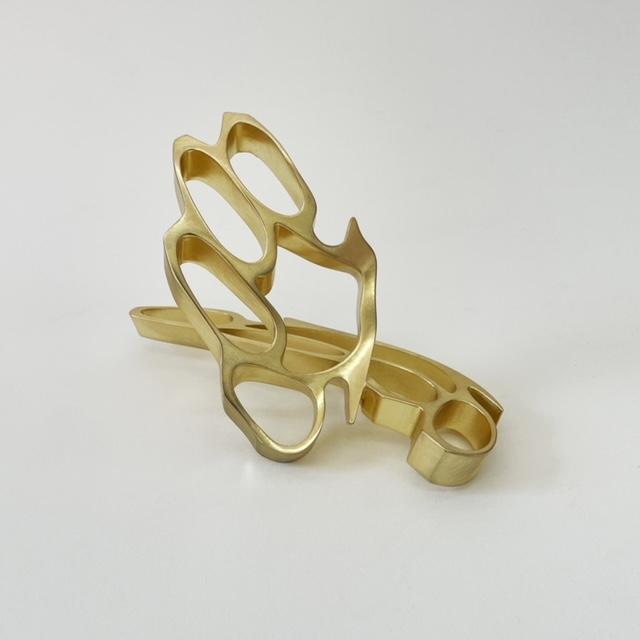 Distortion plays a pivotal role in the American artist Robert Lazzarini’s practice, wherein common or everyday items are stretched and deformed, rendering them less recognizable and uncanny. Early works included a series of “studio objects”: wall-mounted tools that would be typically found in any artist’s studio, such as a hammer—but the object was flattened and torqued, so that the perspective becomes an optical illusion. In 2010, Lazzarini collaborated with KAWS, applying the same treatment to the latter’s iconic Companion character, producing vinyl figures that looked as if they had been reflected in a funhouse mirror. His method? Lazzarini was an early adopter of computer-aided design and manufacturing (CAD/CAM) technology, which produces hyper-precise object renderings that can be modified, altered, or distorted before production.

This play between object and distortion is highlighted in Lazzarini’s latest series, “guns, knives, brass knuckles,” which features sculptures of these common objects, except they have been visually and physically warped, disrupting our perspectival understanding of them. In (2022), for instance, the highly recognizable weapon is twisted in such a way that, although still identifiable, the viewer is left without a clear idea of how it could be grasped and held. That phenomenological experience of recognition, crossed with the object’s social and cultural connotations, invites reflection about what brass knuckles signify, both to an individual as well as to society at large.

On the occasion of the launch of Artnet’s latest Buy Now offering, now live through October 25, we spoke with the artist about the series “guns, knives, brass knuckles” to find out more about how these objects are made and what they mean. 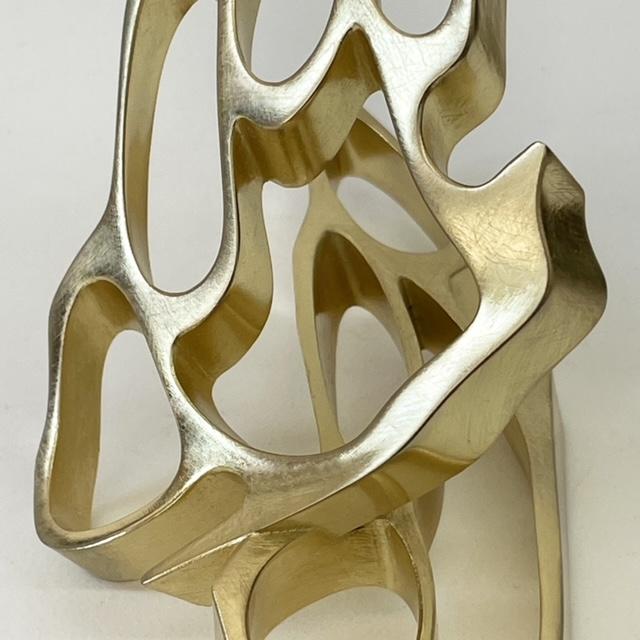 Can you tell me a bit about how you see the brass knuckles within the context of the series?

Sure. “guns, knives, brass knuckles” considers the various kinds of spaces in which you might encounter those objects: public, domestic, and—in the case of the brass knuckles—marginal. So, that suggests something infrequently seen: the back alley, the street fight, the gang fight. Brass knuckles themselves are mostly concealed weapons, hidden inside a pocket and pulled out at the last minute. Unlike a gun, the use of knives and brass knuckles both require a violent encounter that is physically up close.

My work often has corporeal references within it. In this series, I was interested in how each of these works relate to the hand as an extension of the body, more specifically in the grasp. They all represent the grasp as the hand weaponized. And, if the viewer can imagine the objects in their hands, it implicates them in a prospective violent act.

Can you tell me about the process of distortion?

I think about distortion as the relationship between the observable world and schema. So, I’m reconfiguring the sculpture as a way to reconsider it. Part of that process is correlating legibility with illegibility. With brass knuckles, I’m bringing the normative object into digital space and altering it through compound sine waves.

Distortion is not necessarily about making severe deformations to the object. Small changes to their geometries can take them out of normal register in a more unsettling way. Although the process of distortion is about making the forms of objects more complex, it’s also about complicating the space around the object. 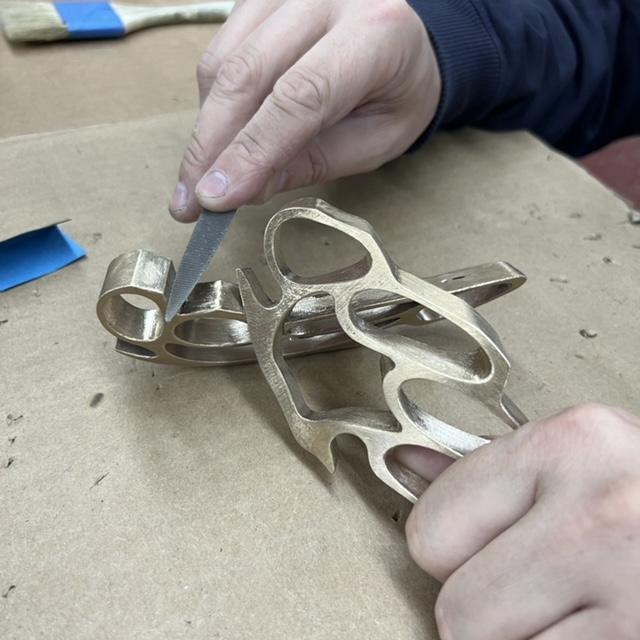 Robert Lazzarini in the studio creating one of the “brass knuckles” sculptures. Courtesy of the artist.

Tell me about the importance of the gold-toned surface of the brass knuckles.

I’m trying to emphasize the tensions within the sculpture, one of which is design-related. But another is the relationship between the golden and decorative quality of the work and its vulgar subject matter. Having a shiny ornament sitting on your credenza in the comfort of your home is very much at odds with the notion of being in a half-lit back alley, trying to smash someone’s face in.

The other brass knuckle sculptures you’ve done contain multiple elements. What is the significance of repetition in these works?

Repetition is a device that I’ve used throughout my career. Mostly it’s been a way for me to express seriality and the expansion and contraction of the object. Here, though, I’m using repetition as a metaphor for kinetic activity. The intertwined knuckles suggest the energy and confusion of the fight.

Within the brass knuckles design, there is the repetition of the four finger holes. This is where the viewer projects their own hand within the sculpture. The distortion of the regular holes creates a slippage, making an offset for them and a proprioceptive misregister.

America is one of the 15 most dangerous places to live in the world. We have a violence problem.

Nobody celebrates violence with the same enthusiasm as America does—TV, movies, video games, the news. The fact that Americans are obsessed with it as entertainment says as much about the commodification of violence as it does about the ever-increasing blur between real and fictional violence. The prevalence of violence across all media adds to this confusion. (2022) reflects upon America’s fascination with violence and reveals an aspect of our brutish nature. 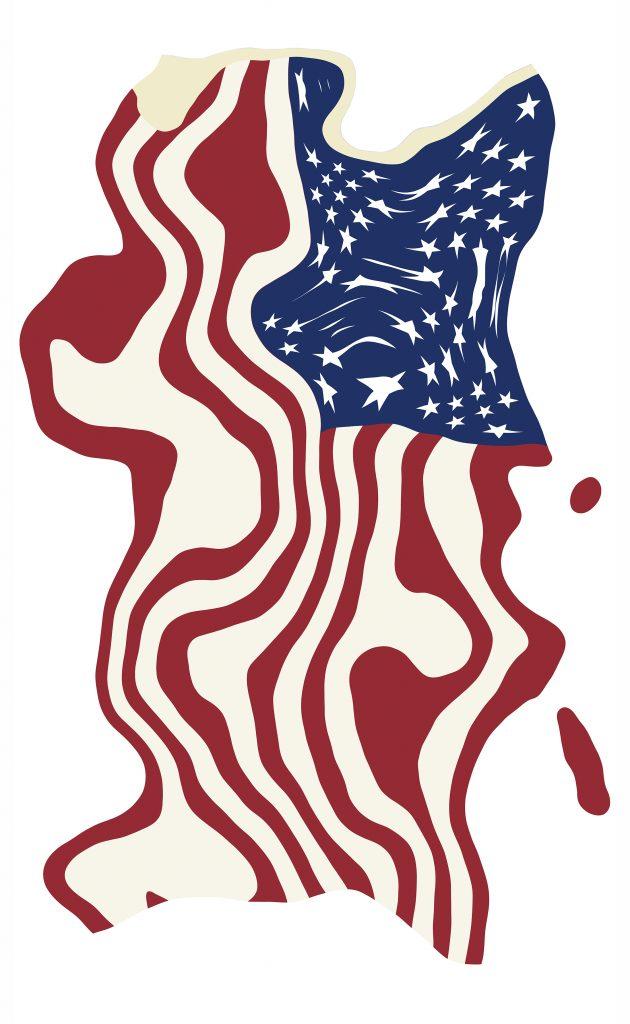 What other projects are you working on in the studio?

I recently started a series based on a group of wall-mounted, distorted American flags. Consistent with my practice, there is no material translation, so they are made of fabric with distorted embroidered stars and variable-length hand-stitching. Overtly, they conjure something of the current state of politics in this country. However, notions of the body are also present—the works reference camouflage, liquidity, and blood. The flags are based on the 9-by-5-1/2-foot variant also known as the “coffin draper,” which is ceremoniously used to shroud the coffins of deceased military who have died in action.

In some ways, I feel these flags are better symbols of our nation than the traditional one—not something static and fixed, but something constantly in a state of flux.