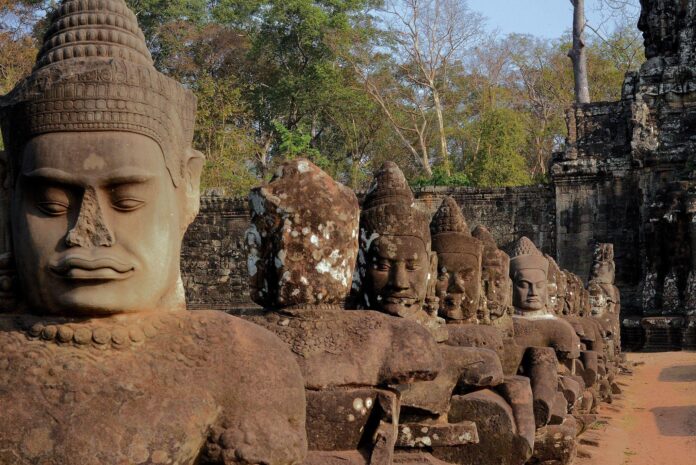 A photoshoot of a $42m San Francisco mansion, dubbed the “most beautiful house in America”, appears to have helped locate a number of ancient Khmer sculptures that the Cambodian government says match those looted years ago from one of the nation’s sacred sites.

The owners of the opulent property are the lawyer Sloan Lindemann Barnett, who is the daughter of the late billionaire art collector George Lindemann, and her husband, Roger Barnett.

One of the shots included in the Architectural Digest spread in January 2021 shows a two-storey central courtyard populated by towering palms and, on one side, several empty plinths. However, it appeared the photograph had been doctored after reporters for the International Consortium of Investigative Journalists (ICIJ) discovered another version of the image online, which shows several stone artefacts of demon and god heads standing on the same plinths.

According to the ICIJ, experts confirmed that the sculptures had indeed been airbrushed from the magazine photograph, though it is not clear by whom and why. Erin Kaplan, a spokesperson for Architectural Digest, told the ICIJ that the magazine published the image without the relics because of “unresolved publication rights around select artworks”.

Lindemann Barnett and her husband did not respond to the ICIJ’s requests for comment, nor could they be reached immediately by The Art Newspaper.

However, their sculptures appear to just be the tip of the iceberg. The Cambodian government is reportedly investigating a larger collection of Khmer relics held by Lindemann Barnett’s parents, described in an Architectural Digest article in 2008 as “one of the greatest collections of Southeast Asian art in private hands”. Shots of their Palm Beach home showed numerous Khmer antiquities, reportedly valued at more than $40m, including two that closely resemble those among Cambodia’s ten most important stolen relics.

Bradley J. Gordon, a US attorney for the Cambodian ministry of culture and fine arts, recognised one of the pieces as depicting the Hindu deity Vishnu. The Cambodian government believes it was stolen from a temple that might be the royal tomb of the family of King Jayavarman IV. “It’s easily one of the most important statues in the temple, and probably all of Koh Ker,” Gordon tells the ICIJ. “By having this in their collection, the Lindemanns essentially [had] the Cambodian equivalent of a sarcophagus stolen from King Tut’s tomb sitting in their living room.”

Lindemann Barnett’s mother Frayda Lindemann did not respond to requests for comment from ICIJ reporters and the Lindemann family has not been accused of wrongdoing.

While the role of Western museums in acquiring artefacts of unclear origin has come under greater scrutiny in recent years (the Fogg Museum at Harvard and the J. Paul Getty Museum in Los Angeles are among those to have returned some relics), the role of private collectors in the potentially illicit trade of antiquities is less well reported. According to the ICIJ, to date the Cambodian government has tracked more than 2,000 allegedly looted Khmer relics to museums and private collectors around the world.

Among the most prolific was the British-born antiquities collector Douglas Latchford, who was the subject of an ongoing US investigation into alleged trafficking. Latchford was indicted in 2019, but died in 2020, effectively closing the case against him. Earlier this month, 30 cultural artefacts with links to Latchford were repatriated to Cambodia.

“This is a systemic problem” in the art market, according to Domenic DiGiovanni, a former US customs and border protection officer. He believes there is little incentive for dealers and collectors to stop buying looted art—as he tells the ICIJ: “Having to return something, that’s just the cost of business.”

The Influence of Japanese Art on Western Artists