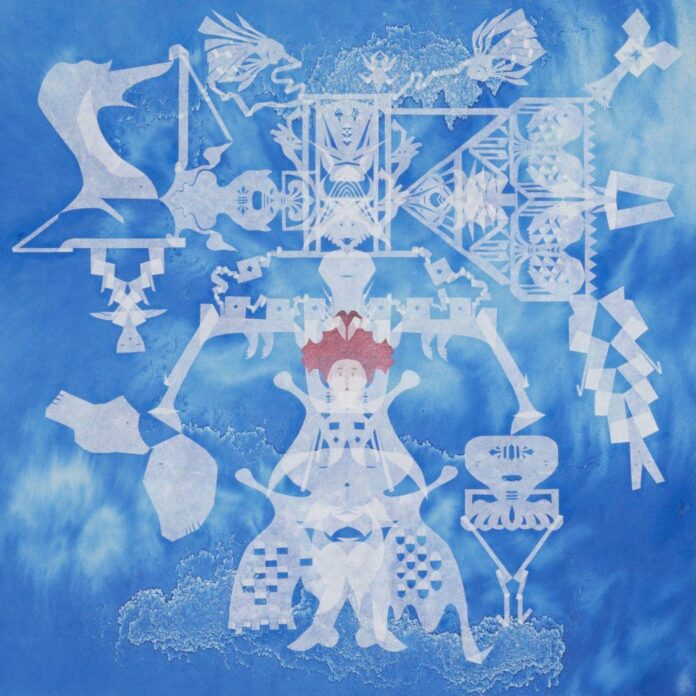 The eyes of the art world are eagerly set on the French capital this week for the debut of Paris+ by Art Basel at the Grand Palais Éphémère. Coinciding with the highly anticipated launch of the fair, galleries across Paris are staging ambitious shows to attract collectors and art lovers. Here we pick some of the top gallery shows worth visiting. 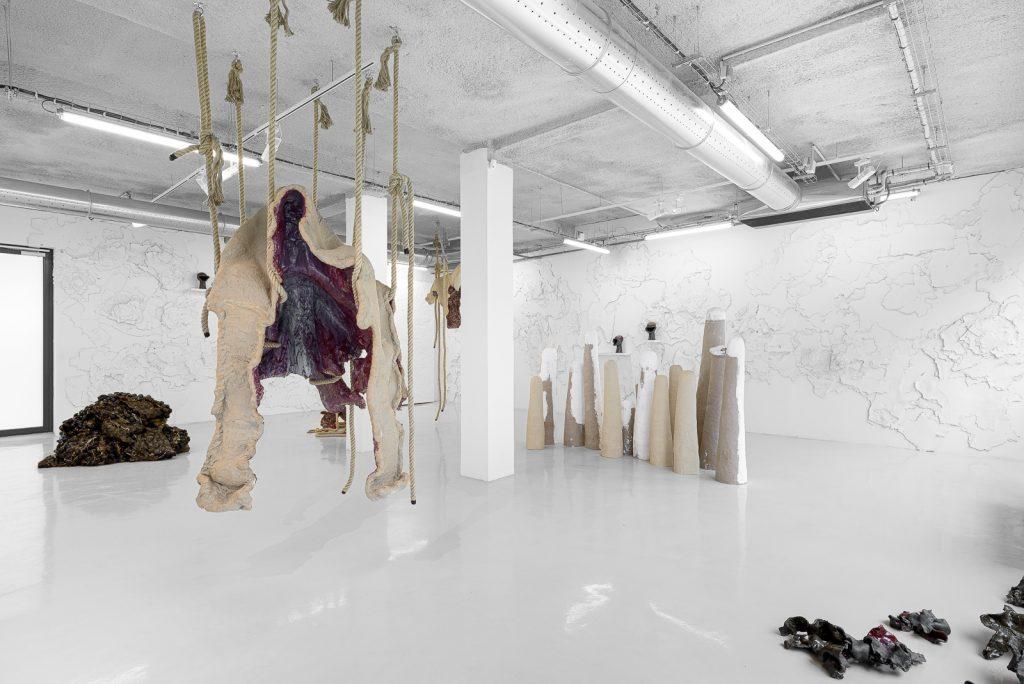 “Inside, everything shifts like small monsters that the light has awakened by surprise,” says the Togolese artist Kokou Ferdinand Makouvia about his haunting show that draws on the Mina culture of West Africa and animism. In front of walls covered in layered pieces of burnt cardboard painted white, ceramic faces seem to scream. Beside a bush of phallic cones, irregular forms recalling animal hides hang suspended from ropes. Completing the composition are glass bowls filled with toxic beads and coals resembling decomposing matter.

Tavares Strachan: “In Broad Daylight” and “In Total Darkness”
Perrotin and Galerie Marian Goodman
Until December 17, 2022 at Perrotin; until November 26, 2022 at Marian Goodman 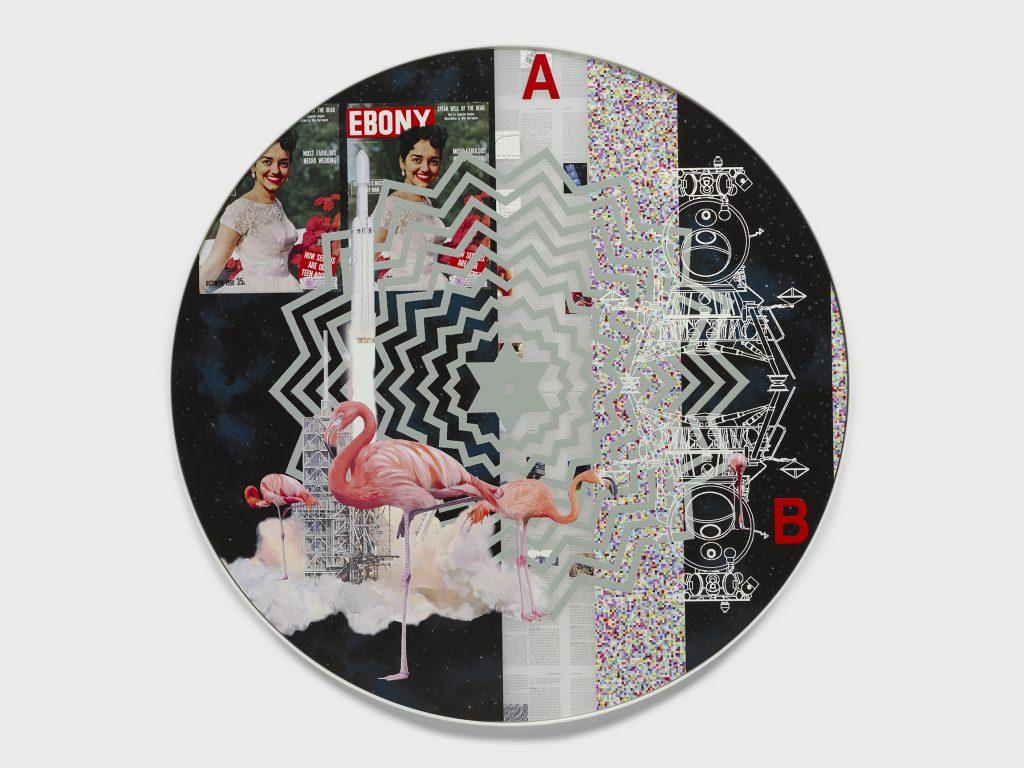 The second and third parts of Tavares Strachan’s trilogy of exhibitions which began at Marian Goodman New York with “The Awakening” see the Nassau-born, New York-based artist probe Black civil rights and the aftermath of colonialism.

For his Perrotin show, Strachan has created a triptych of Black Madonnas in Carrara marble, conflating the images of the madonna and child and Michelangelo’s Pieta with police brutality and racism. The sculptures portray South African activist Bantu Stephen Biko (who died in a prison cell after a hunger strike in 1977), Amadou Diallo (who was killed by New York City police in 1999), and Malcolm X, each being held by their mother.

Meanwhile, at Marian Goodman is a theatrical, performance and research-based exhibition that explores the Haitian Revolution and Black pride. A shimmering beaded curtain with the sentence “I am through with passing” in red sets a defiant tone. Each is a 45-minute-long “immersive experience” that requires reservation. 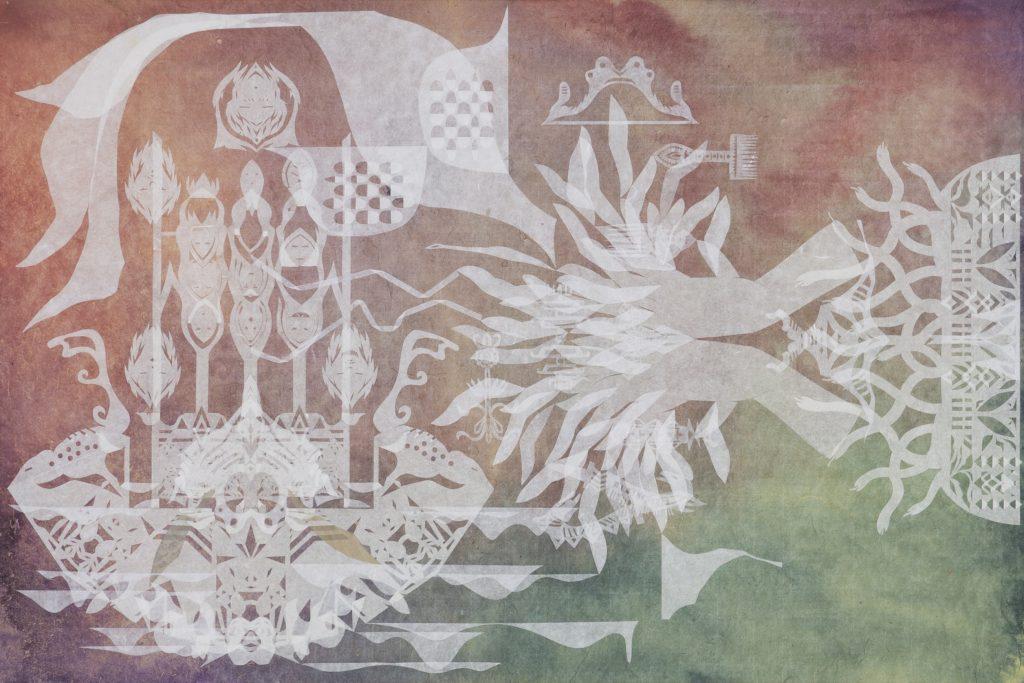 South Korean artist Haegue Yang delved into shamanistic rituals, paper-cutting traditions, and the sacred dimension of hanji, traditional Korean mulberry paper, for her new series of intricate, two-dimensional compositions. Sculptures made from jangling cords of bells or adorned with flowers, as well as Yang’s signature blind installations, are also on display in Yang’s fourth show at the gallery. 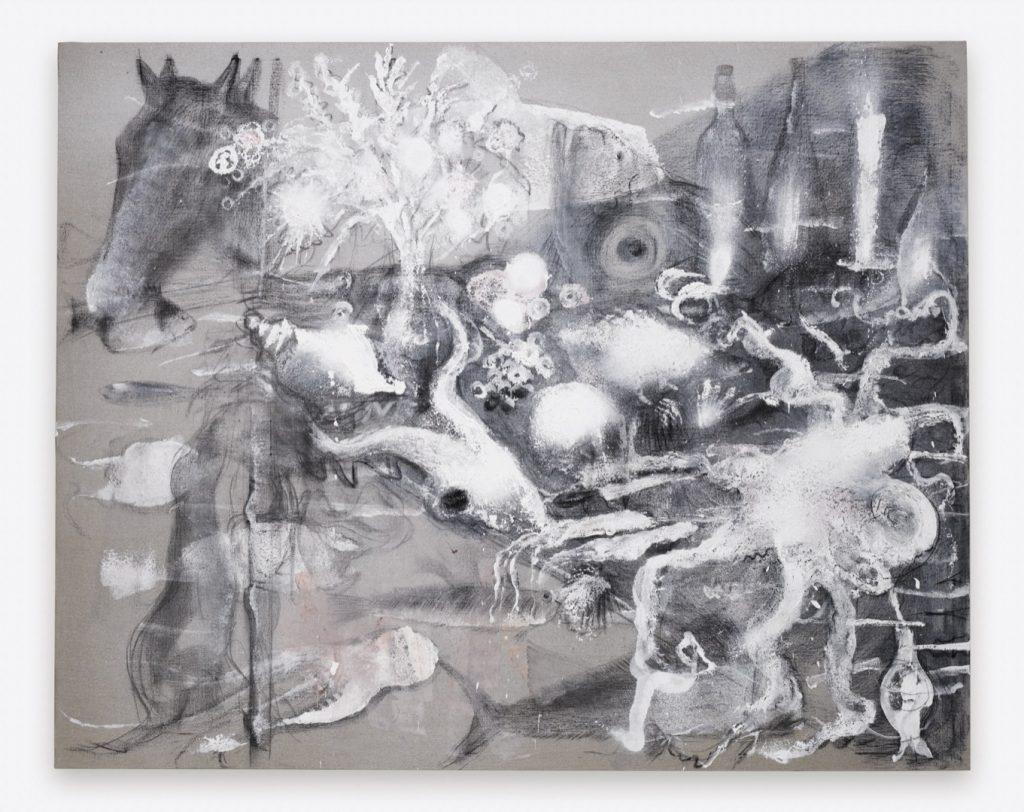 “Music from far-away parties, today’s banquets and those from long ago—all on the same very long table,” says Miquel Barceló of his new series of still-life paintings on display at Galerie Thaddaeus Ropac. The Spanish, Mallorca-based artist has moved away from sedimented surfaces to embrace the grisaille technique, whereby translucent layers of color are applied over a monochromatic underpainting, lending the works a sense of reverie. Horses and bulls are superposed with sea creatures, candles, and . In other paintings depicting tables laden with fruits, flowers, hares, and lobsters, Barceló draws on the 17th-century Dutch and Spanish still-life traditions. 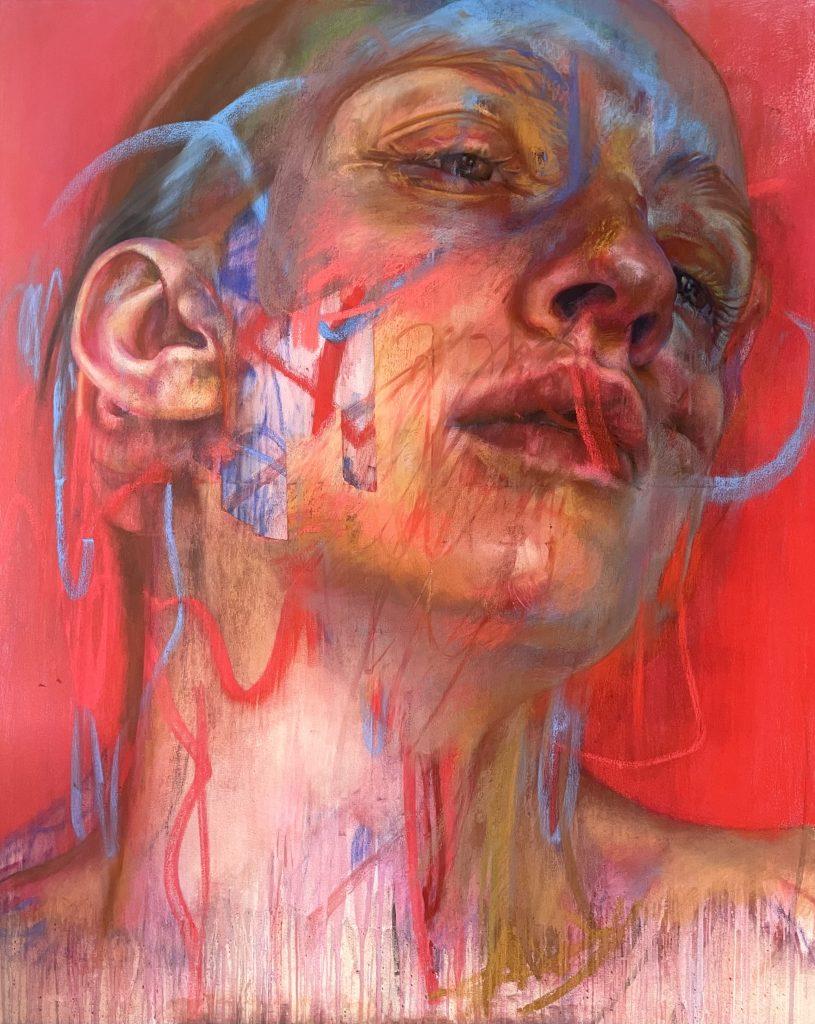 British artist Jenny Saville is renowned for her passion for painting flesh in a vivid, instinctive way. Her show in Gagosian’s space near the Tuileries Garden is filled with new portraiture paintings, sometimes featuring just a face and neck. A raw energy emanates from these luminous pastel works, all based on photographs, which have stenciled lines and markings that are loosely reminiscent of Willem de Kooning’s abstract works. They merge with the facial features in a liberating style. 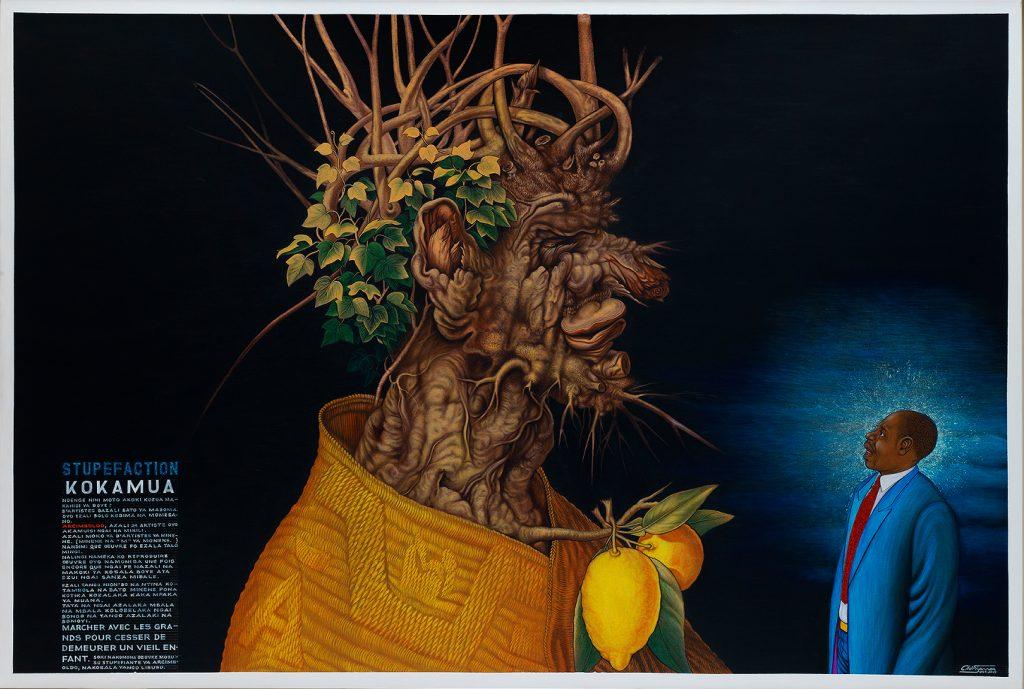 In the last few decades, Chéri Samba has established himself as one of the leading artists from the Democratic Republic of Congo with his witty paintings that have won him international acclaim. Presented at the gallery are works dwelling on love, family, and political power, as well as self-portraits about Samba’s ambition as an artist. In one piece, Samba has depicted himself as a big red fish and, in another work, he gazes up, stupefied, at a copy of a figure from Giuseppe Arcimboldo’s painting, Winter (1653)—a reflection on his hard-won place in art history. 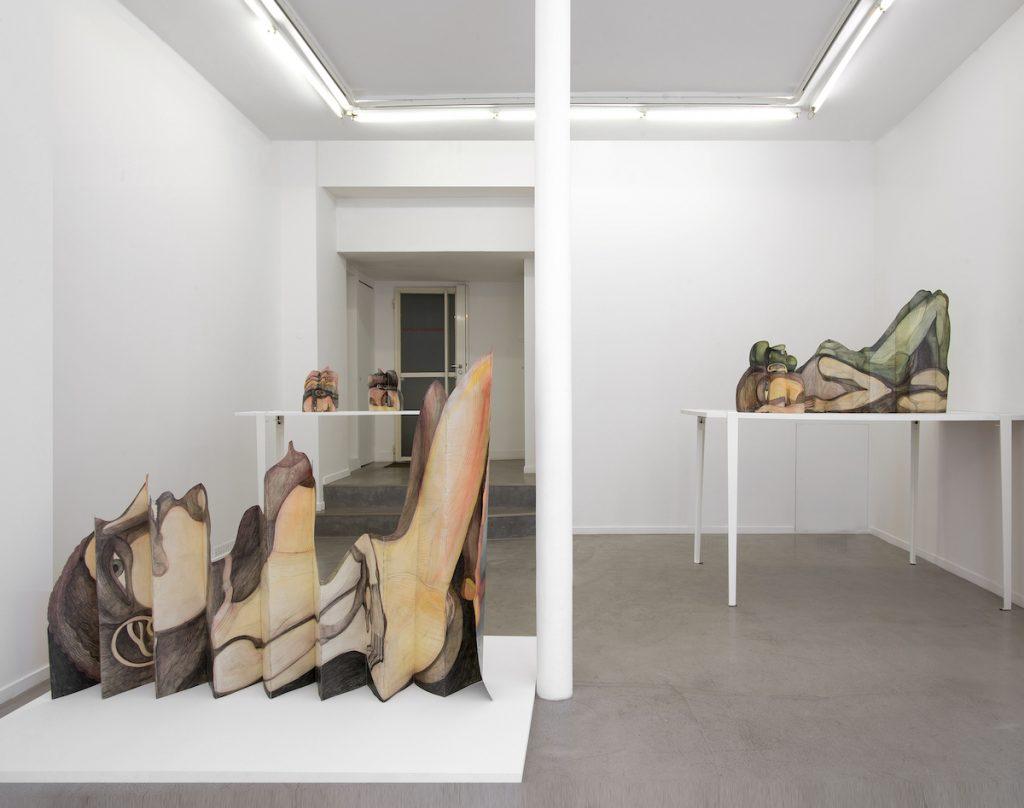 Sandra Vásquez de la Horra’s multi-part, watercolor drawings of watchful reclining female figures spanning accordion folds take on a sculptural presence. The Chilean, Berlin-based artist—one of whose works was acquired last week by the Frieze Tate Fund from Sprovieri gallery—found inspiration from her childhood memory of a carved stone moai figure on Easter Island. The sinuous pencil lines, however, recall the stratified landscape of the Chuquicamata copper mine. The mythological works have a particular, three-dimensional quality thanks to the paper having been immersed in molten beeswax.

Adel Abdessemed: “Out, Out, Brief Candle”
Galleria Continua
Through November 26, 2022 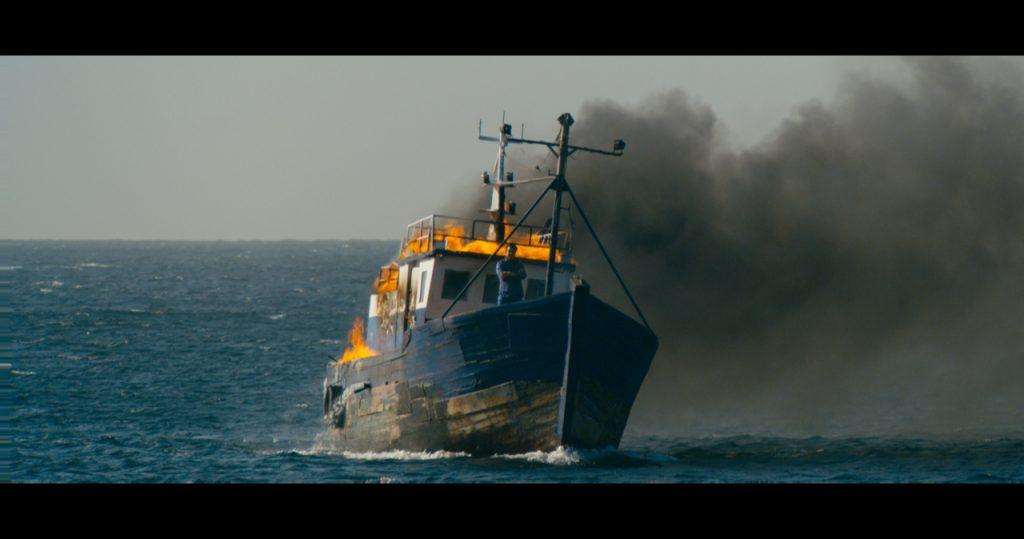 The exhibition, whose title quotes Shakespeare’s , is Adel Abdessemed’s first exhibition at Galleria Continua—a show that reflects upon mortality, migration, war, and suffering. In one work, the Algeria-born, Paris-based artist stamps on a candle, in another he appears as the captain of a ship engulfed by flames; it is an allegory for the tragedy of lives that have perished in the dangerous crossing of the Mediterranean Sea that asylum seekers undertake. Elsewhere are burnt wood bas-reliefs based on images of the war in Ukraine. 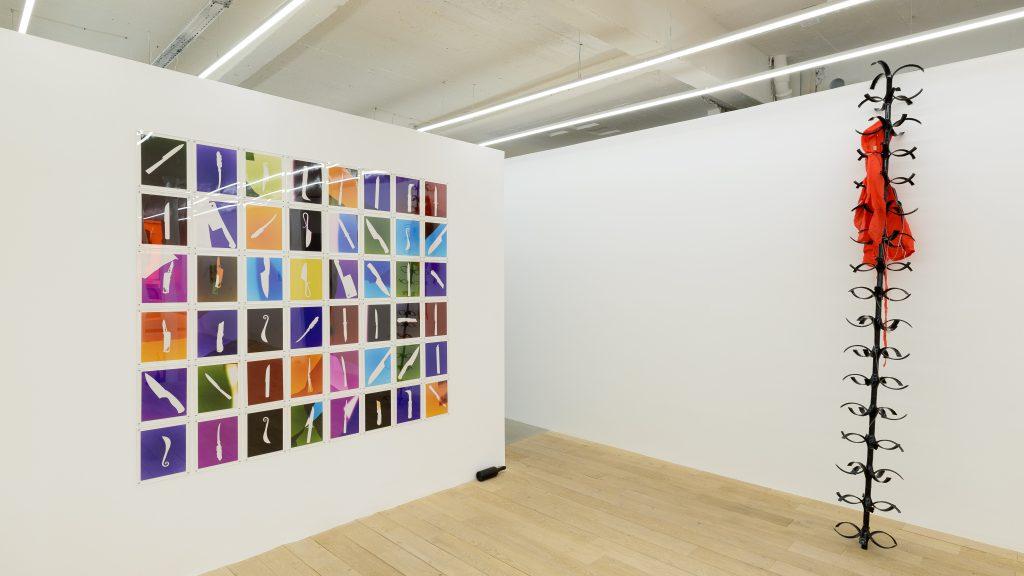 Ahead of their solo exhibition at the Kunsthalle Basel in Switzerland next year, British artist P. Staff, based between London and Los Angeles, reflects upon the double meaning of “love life” in this multi-media show. Imbued with a sense of absence, the artist contemplates the vestiges of romantic encounters through resin-encased photo collages of hand-painted faces with deformed tongues and fragments of hair and skin, photograms of knives, scalpels, and blades, as well as black-and-white photographs of bottles left over from a party. The same bottles, filled with synthetic bodily fluids, are strewn around the gallery, while a red windbreaker is hung on a spiky stand.