Home News A French Auction of a Royal Bronze Dragon Seal Has Been Halted... 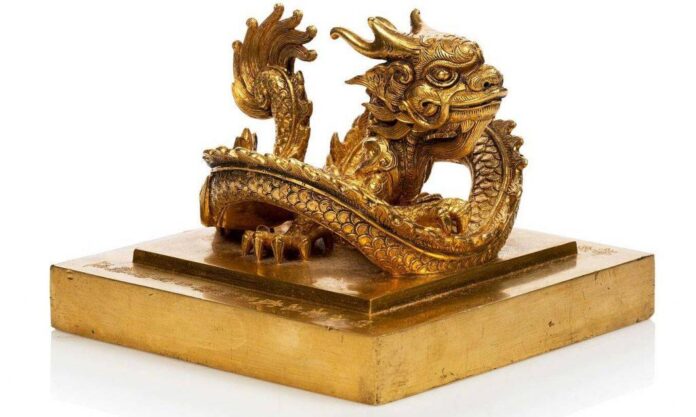 The sale of a 19th-century Vietnamese bronze seal at a French auction house has been postponed after government officials in Vietnam stepped in.

Originally scheduled to hit the block as part of the “Great Civilizations: Vietnam Arts Sale” on October 31 at Paris-based Millon, the seal was removed from the online catalog, and a statement on the auction house website said that due to “strong interest” from the Vietnamese State, “we are postponing the sale of this coin.” The sale was rescheduled for Thursday, November 10, though a deal between the house and officials in Hanoi may occur before that time.

Nguyen Phuong Hoa, the director general of the International Cooperation Department of the Vietnamese Ministry of Culture, Sports, and Tourism, said that the country halted the sale with the goal of “a direct negotiation between the two sides” to discuss returning the object to Vietnam. “The imperial golden seal is an antique which represents a lot of values from a historical period of Vietnam,” she told

The hefty 24-pound square-shaped seal bears a twisting dragon carved on top, and was estimated to sell for up to $3 million. According to Millon, it dates to the Nguyễn dynasty (1802–1945) and was made in 1823 for Emperor Minh Mang, who ruled the country from 1820 to 1841. Later, the work was passed on to Bao Dai, the emperor who ruled South Vietnam from 1949 to 1955, and was consigned to the auction house along with around 330 artworks from his collection.

The French auction house Millon is auctioning these Vietnamese royal treasures, which were once used by our Emperior Minh Mạng. These treasures are of signigicance to all Vietnamese and should be returned to Việt Nam. Millon should cancel the auction!https://t.co/mSGl5fWVoR pic.twitter.com/bbTIOhWRfP

On October 29, three days before the sale was set to take place, Vietnamese author Dr. Nguyễn Phan Quế Mai posted an image of the seal on Twitter, urging the auction house to cancel the sale of “treasures… of significance to all Vietnamese.” In response, other Twitter users expressed support of Mai’s request, sharing the public contact information of the auction house representative handling the sale and tweeting at French president Emmanuel Macron.