Home News A Minnesota University Is Under Fire for Dismissing an Art History Professor... 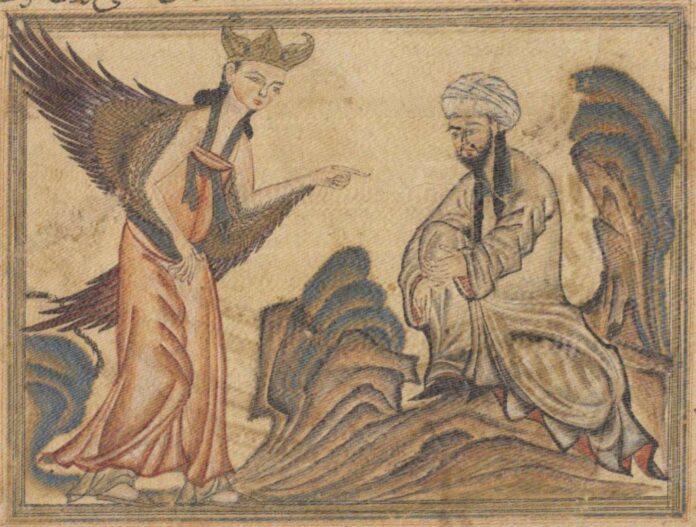 In a controversial move, an adjunct professor at Hamline University in St. Paul, Minnesota, has lost her job after showing her class Medieval paintings depicting the Prophet Muhammad, founder of the Islamic religion.

The school’s decision not to renew the professor’s contract for the current semester has sparked debates over free speech, including a Change.org petition in support of the teacher, signed by at least 2,500 scholars and students of Islamic studies and art history, and a condemnation from PEN America of the “egregious violation” of academic freedom.

Though it is not mentioned in the Koran, many Muslims believe it is idolatrous to show Muhammad’s face. Most mosques instead are decorated with geometric designs and calligraphy featuring passages from the Koran, and Islamic figurative art is now rare.

But there is also a tradition of painting Muhammad, often in miniature, especially in Persia, Turkey, and India. Examples can be found in the collections of museums such as the Louvre, the Metropolitan Museum of Art, and the Asian Art Museum of San Francisco. It was a selection of two of those artworks shown to the class that cost the professor her job. 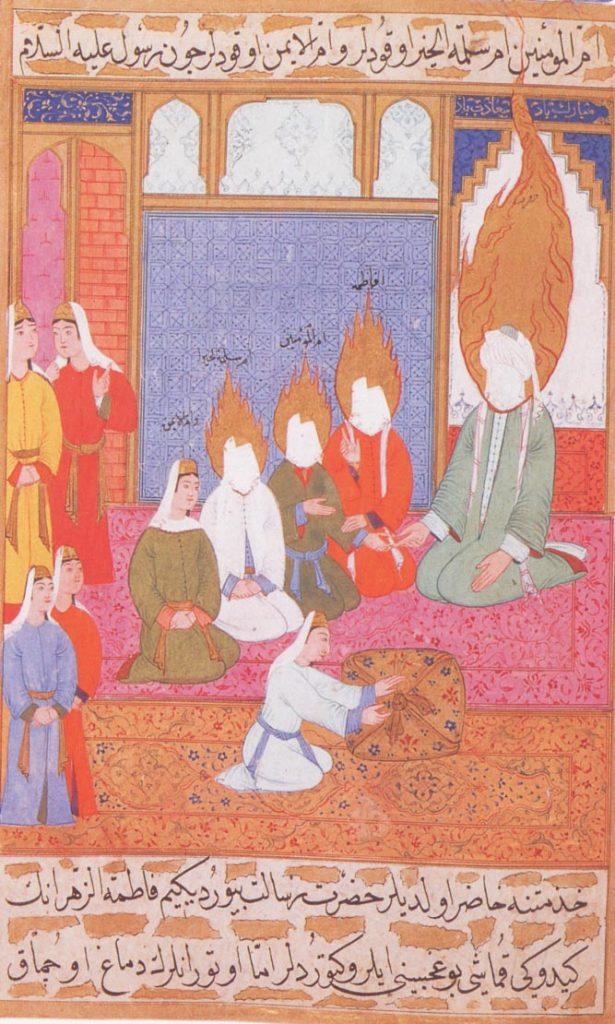 The teacher, identified by the  as Erika Lopez Prater, is said to have displayed the images during on online lecture on October 6, 2022. There was a two-minute content warning prior to the artworks’ appearance, to allow students to opt out of viewing the potentially offensive imagery should they feel it was against their faith.

“I am showing you this image for a reason,” Prater said before changing the slide, as reported by the university’s student paper, the . “And that is that there is this common thinking that Islam completely forbids, outright, any figurative depictions or any depictions of holy personages. While many Islamic cultures do strongly frown on this practice, I would like to remind you there is no one, monothetic Islamic culture.”

One of the artworks was an illustration of the archangel Gabriel delivering his revelations to Muhammad from a 14th-century manuscript by Rashīd al-Dīn called the , while the other was a 16th-century work by Mustafa ibn Vali showing the prophet with a veil and halo.

Aram Wedatalla, a student in the class and the president of the university’s Muslim Student Association, complained to the professor afterward. Prater apologized in an email, but Wedatalla elevated the issue to university administrators, arguing that the lesson was disrespectful to Muslim students.

In response, the dean of students sent an email to the student body condemning the incident as “undeniably inconsiderate, disrespectful, and Islamophobic.” 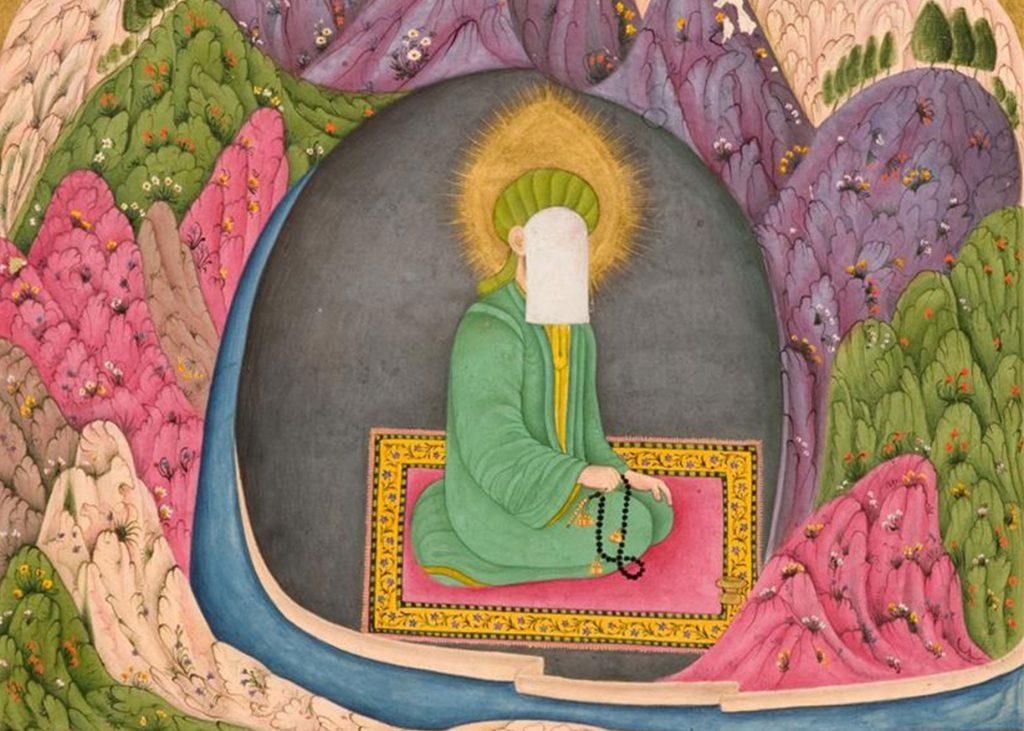 The prophet Muhammad in the cave of Hira, page from a Hamla-yi Haidari manuscript (ca. 1725). Asian Art Museum of San Francisco, gift of George Hopper Fitch.

On December 6, two articles on the incident were published in the —one a news report in which the university’s associate vice president of inclusive excellence David Everett said that “it was decided it was best that this faculty member was no longer part of the Hamline community.”

“My perspective and actions have been lamentably mischaracterized, my opportunities for due process have been thwarted, and Dr. Everett’s all-employee email accusation that ‘undeniably… Islamophobic’ actions undertaken in my class on Oct. 6 have been misapplied,” Prater told the student paper.

The other article was a letter to the editor from Mark Berkson, the university’s department of religion chair and a professor of Asian religions, Islam, and comparative religion.

“In the context of an art history classroom, showing an Islamic representation of the Prophet Muhammad, a painting that was done to honor Muhammad and depict an important historical moment, is not an example of Islamophobia,” he wrote. “Labeling it this way is not only inaccurate but also takes our attention off of real examples of bigotry and hate.”

The editorial board removed the article from its website just two days after its publication. (Berkson’s text is currently available on the libertarian magazine Reason, along with both emails from administrators to the university community.) 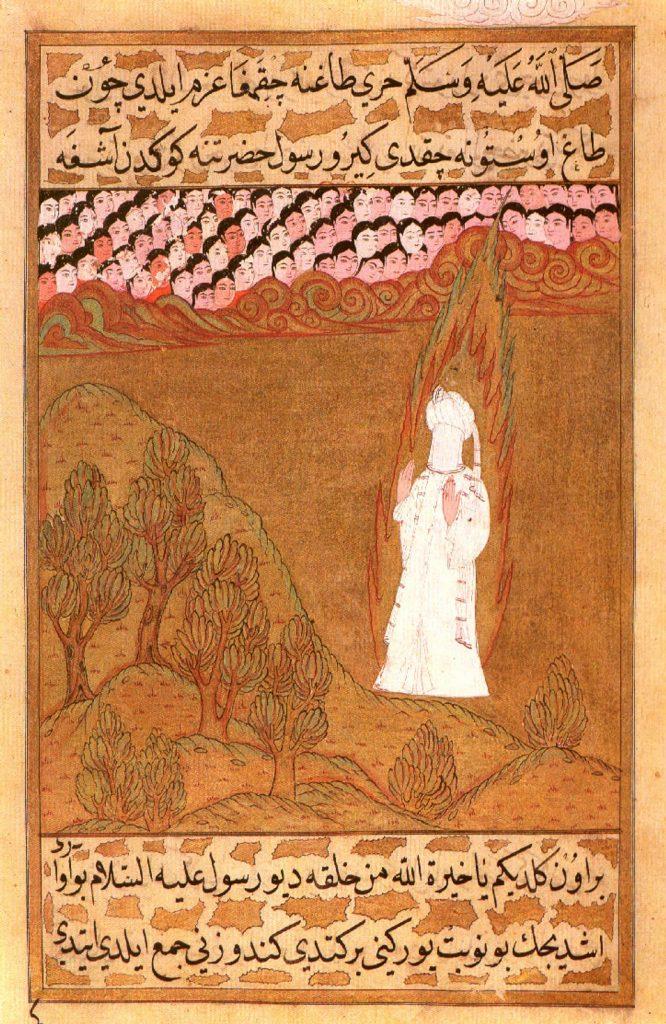 The Islamic prophet Muhammad (figure without face) on Mount Hira. Ottoman miniature painting from the . Collection of the Topkapı Sarayı Müzesi, Istanbul.

“Those in our community have expressed that a letter we published has caused them harm,” the  wrote in explanation of the decision. “Our publication will not participate in conversations where a person must defend their lived experience and trauma as topics of discussion or debate.”

The following day, a second university-wide email went out, from Everett and university president Fayneese Miller. It said that “respect for the observant Muslim students in that classroom should have superseded academic freedom.”

“Displaying an image of Muhammad may similarly be deeply offensive to some, but because it was pedagogically relevant to the course at issue, it is protected by basic tenets of academic freedom,” Sabrina Conza, the program officer of the Foundation for Individual Rights and Expression (FIRE), countered in an open letter to Miller, expressing the organization’s concern about the incident and calling for Prater to be reinstated.

The university had held a 33-person meeting about the incident on November 10, with Everett and other administrators such as the dean of students, the interim provost, the assistant director of social justice programs, and the university chaplain among those in attendance, as well as a number of students.

“Of all of the conversations that were held between the MSA and the administration about what to do about the situation, the faculty member was excluded and not a single scholarly voice was ever included,” Berkson told Hyperallergic. “So nobody in the room actually knew anything about these images.” 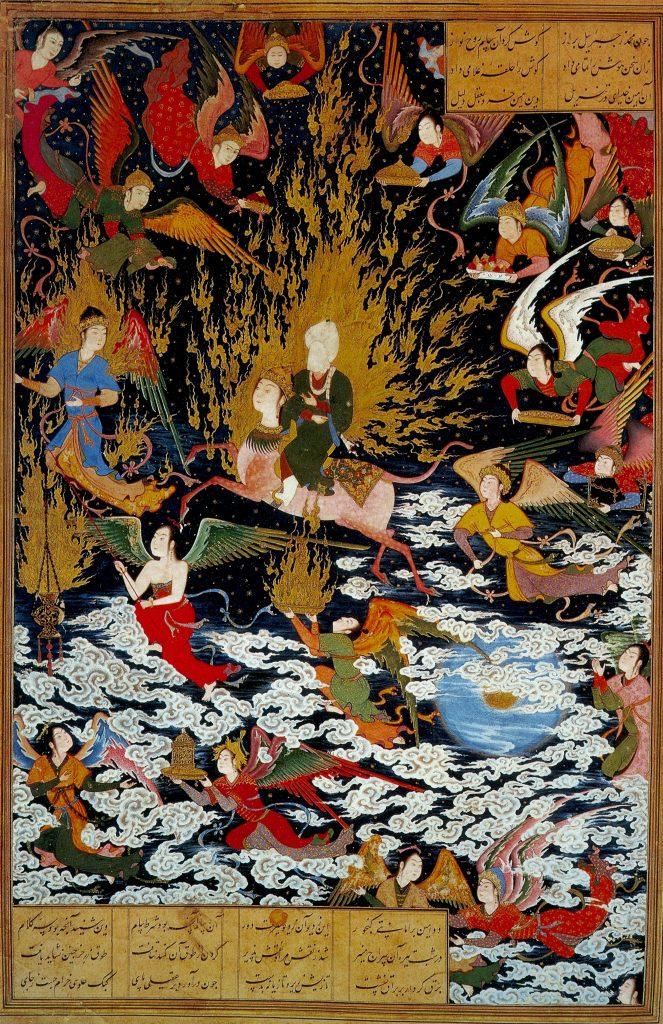 Persian miniature 1550 AD depicting the Prophet Muhammad ascending on the Burak into Heaven, a journey known as the Miraj. Photo by Universal History Archive/Getty Images.

“These images are a part of Islamic artistic tradition, and it is very important for us to appreciate and study. That’s what art historians do,” Berkson added. “If specific students don’t want to look at it, that is an important right. I think we should have a protocol to ensure that no student’s religious prohibitions are violated. But their prohibition cannot be imposed on everyone else.”

Representatives for Hamline University did not respond to a request for comment.

To address concerns among the university’s Muslim community, Hamline reportedly invited Jaylani Hussein, executive director of Minnesota’s chapter of the Council on American-Islamic Relations, to the school to lead a conversation about Islamophobia in December.

“Many of the Muslim students on campus, after they heard of this incident, it impacted them. It impacted their grades, it impacted them finishing off the semester. They obviously were hurt. At the same time, they’re appreciative of the institution doing the right thing,” Hussein told last month. “For us Muslims, it is blasphemy.”

News of the professor’s termination was first reported outside the university in New Lines Magazine by Christiane Gruber, an art historian who specializes in depictions of Muhammad. 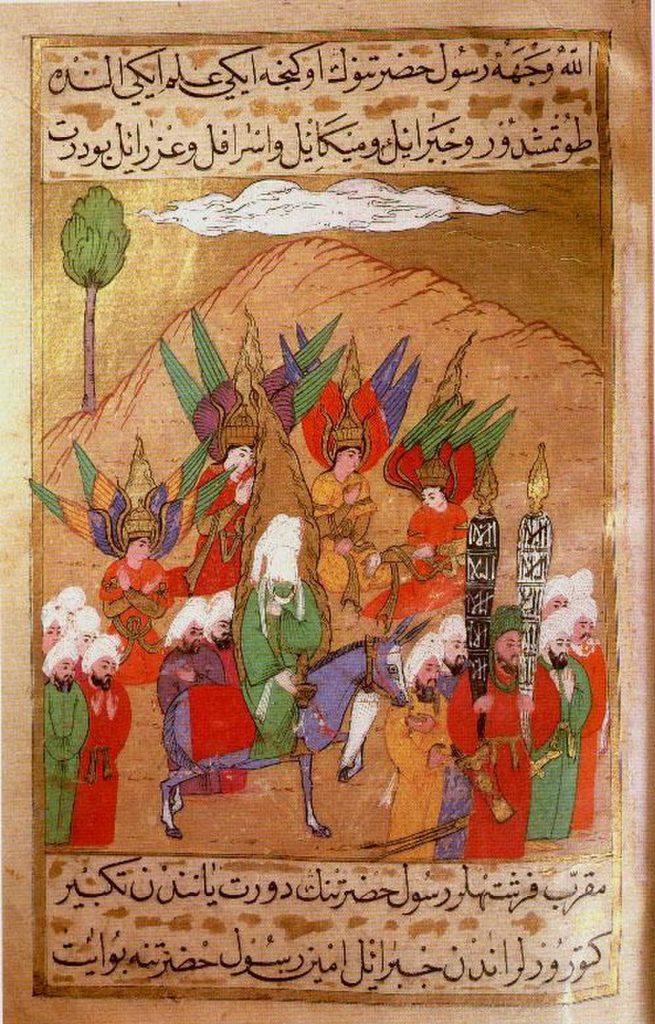 The Prophet Muhammad and his companions advancing on Mecca, attended by the angels Gabriel, Michael, Israfil and Azrail, from (1595).

“Hamline administrators have labeled this corpus of Islamic depictions of Muhammad, along with their teaching, as hateful, intolerant, and Islamophobic. And yet the visual evidence proves contrary: The images were made, almost without exception, by Muslim artists for Muslim patrons in respect for, and in exaltation of, Muhammad and the Quran,” Gruber wrote.

“Through conflation or confusion, Hamline has privileged an ultraconservative Muslim view on the subject that happens to coincide with the age-old Western cliche that Muslims are banned from viewing images of the prophet,” she added, noting that this “muzzles all other voices while potentially endangering rare and precious works of Islamic art.”

“If these reports are accurate, Hamline University has committed one of the most egregious violations of academic freedom in recent memory,” Jeremy Young, senior manager of free expression and education at PEN America, said in a statement.

“Not only is an art history professor well within their rights to show medieval and Renaissance Islamic artworks in class,” he added, “but the professor apparently took added care to create a positive pedagogical experience for students—placing the images in historical context, allowing students to opt out of viewing them, and thoughtfully exploring the history and diversity of Islamic art and thought.” 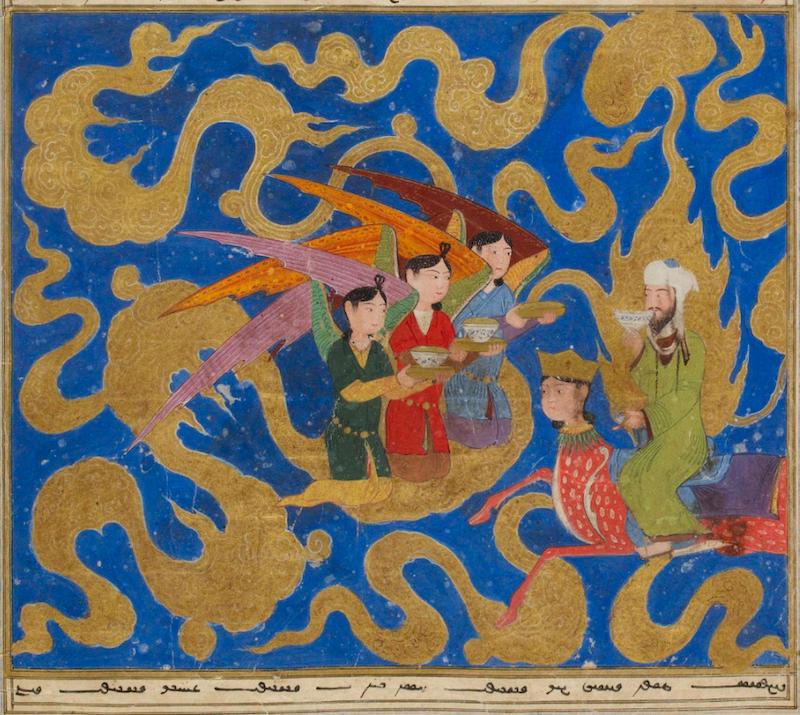 The ascension of the prophet Muhammad depicted in the manuscript (1436).

The Academic Freedom Alliance also published a letter in support of Prater, calling for her immediate reinstatement.

“If a professor of art history cannot show college students significant works of art for fear that offended students or members of the community could get that professor fired for doing so, then there simply is no serious commitment to academic freedom at that institution—and indeed no serious commitment to higher education,” Keith Whittington, a member of the alliance’s academic committee and a professor of politics at Princeton University, wrote in the letter.

In another email to the Hamline community on December 31, the university president continued to defend the decision not to renew Prater’s contract.

“It was important that our Muslim students, as well as all other students, feel safe, supported, and respected both in and out of our classrooms,” Miller wrote, according to . “It is also important that we clarify that the adjunct instructor was teaching for the first time at Hamline, received an appointment letter for the fall semester, and taught the course until the end of the term.”

In response, FIRE filed a complaint with the Higher Learning Commission on January 4, asking that the organization hold the university accountable for violating accreditation standards regarding academic freedom.

“We gave Hamline plenty of time to reverse course, but it’s clear they’re not planning to deliver on their academic freedom promises,” FIRE attorney Alex Morey, who wrote the complaint, said in a statement.

“Hamline has no right to dismiss an art history instructor for teaching art history,” Conza added. “Hamline clearly doesn’t understand what academic freedom means, even though it explicitly promises faculty this core right.”