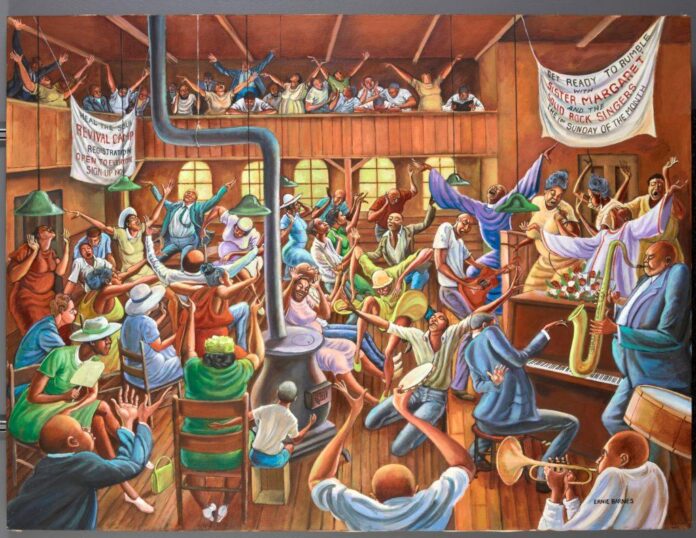 Ernie Barnes became the surprise breakout star of the May auction season this year after his painting (1976) set a $15.3 million record at Christie’s New York. Now, another work by the artist, (1993), is coming to auction at a special dedicated sale at Bonhams New York on September 9. It has an estimate of $500,000-$700,000.

The artist, who died in 2009, was commissioned to paint as an album cover for Marvin Gaye. A frenzied bidding wore broke out for the work, which ultimately reached 76 times its high estimate.

The was previously owned by a singer and friend of Barnes, Margaret Bell, who commissioned it and appears in the painting’s depiction of a choir. It has never before been seen in public.

Depicting a Sunday church service typical of the American South, the painting is a classic example of Barnes’s energetic compositions filled with a highly animated cast of elongated figures. The rhythms of the music players and gospel singers feel almost audible by the way Barnes has captured their lively movements.

Bell has said that the work was inspired by a conversation between her and Barnes in 1991. He apparently told her, “after hearing your voice Margaret, I can envision a wonderful piece, full of color, movement and music! If you commission me, I will create it for you!”

Prior to becoming an artist, Barnes was also an actor, author, and professional footballer. He was born in 1938 in Durham, North Carolina.

The work is currently on preview at Bonhams New Bond Street in London. On July 27 it will be on display at Bonham Los Angeles on July 27 before heading to Bonhams New York on September 1.

Who Was the Marquise de Grollier? A Work by the 18th-Century Woman Once Called ‘the Raphael of Flower Painting’ Just Entered the Met’s Collection

Spotlight: An Exhibition of Yayoi Kusama’s Most Iconic Motifs Alights at PAD London