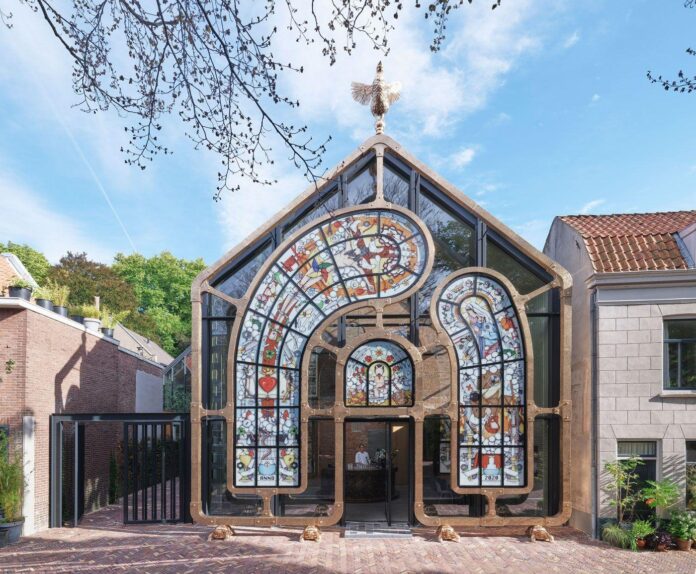 The backside of a late-19th-century Dutch church gets a new life today with the official unveiling of a massive and provocative glass-and-bronze sculpture from Studio Job, the contemporary design studio known for its whimsical, diabolical riffs on European art and objects

Located in Dordrecht, south of Rotterdam, the freestanding, 14-metre-high artwork, called The Embrace, is placed just in front of the renovated building. Made up of three surreal glass windows apparently balanced on the backs of four bronze turtles, it is topped with a two-metre-high bronze cockerel. A church’s stained-glass imagery is usually only visible from the inside, but these windows are best viewed from the street. Weighing in at around 10,000 kilograms, the work suggests a church wall in motion, as though the turtles were making off with part of the building.

The three curvaceous windows—which wrap around each other in something like a group hug—contain figures suggesting Christ on the cross, an infant Jesus, St Joseph, and the Virgin Mary, along with flowing decorative depictions of bees, rockets, worms, padlocks, human sperm cells, and something or other by Louis Vuitton.

Commissioned by Dordrecht’s Foundation Kunstkerk, the sculpture will serve as the calling card and public face for the transformed Protestant church building, which is being relaunched as an exhibition space and cultural centre called Kunstkerk, or art church.

The sculpture has been five years in the making, says Job Smeets, the Belgian-born artist and designer who founded Studio Job in 1998, not long after graduating from Design Academy Eindhoven, in the Netherlands. A few years later, he was joined by the Dutch graphic artist Nynke Tynagel, and the two, who were also life partners, became perennial fixtures at the Milan Furniture Fair and in design galleries on both sides of the Atlantic. Known for their anything-and-everything-but-minimalism approach to visual culture, the Antwerp-based duo created one-off installations and limited-edition designs, as well as a range of household objects and furniture.

The couple eventually split. Tynagel left behind her creative duties in 2015, and Smeets, who lives between Italy and Belgium, expanded his studio, now numbering around 30, while starting a new family.

Speaking about The Embrace this week in Dordrecht just after the scaffolding came off, Smeets, 51, preferred to avoid specifics when explaining Studio Job’s signature graphic style, which cross-pollinates scurrilous motifs with traditional forms.

Is that rather devilish-looking baby in the centre window indeed the Baby Jesus? “Could be,” says Smeets, who says it is also a reference to his two-year-old son, Elvis, or, as Smeets calls him, “my Baby Jesus.”

The work’s manifest religious connotations may in fact be a kind of colossal red herring, suggests Smeets, who says his real subject here “is family”. He later admits that the figure of the Virgin Mary, who happens to wearing a bomber jacket, is based on his partner and the mother of his two young children, Studio Job’s Rebecca Sharkey.

The windows include images of power plants and stethoscopes, along with butterflies and roses, but Smeets says he regards The Embrace as “very classical”, by which he actually means “contemporary”.

“Hundreds of years ago, the stained glass windows of those old churches were set in a contemporary landscape,” he says, deferring to the typical blending of biblical scenes with depictions of benefactors in what was then modern Europe dress. “And that’s what I do.”

‘They Are Thieves of Time’: Dismayed Paleontologists Speak Out Against the Booming Market for Dinosaur Skeletons