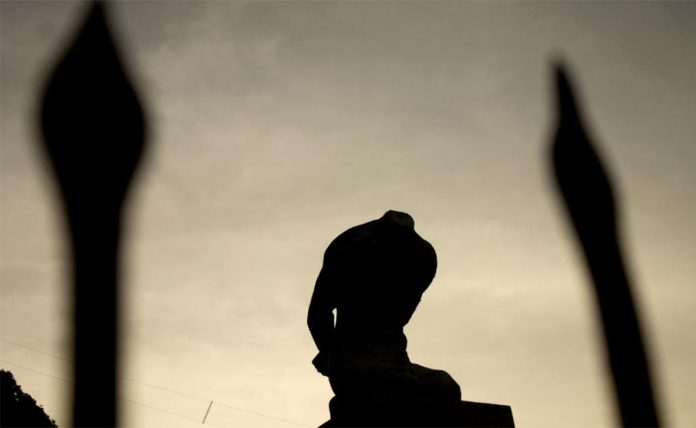 Mankind is erecting statues for future generations. It is a way to remember those who have made an invaluable contribution to the development of society, it is a necessity to immortalize the memory of an event, and sometimes an opportunity to remind people passing by that life ends equally for all.

Creativity can take many different forms. There have always been artists who were underestimated and even artists who received a hot fire of the Inquisition as a reward for their work. In our enlightened time, the creator has the freedom to express any thought – and some do so with a truly frightening scope. Before you are several of the strangest and scariest statues in the world, each of which could well frighten even the devil himself. 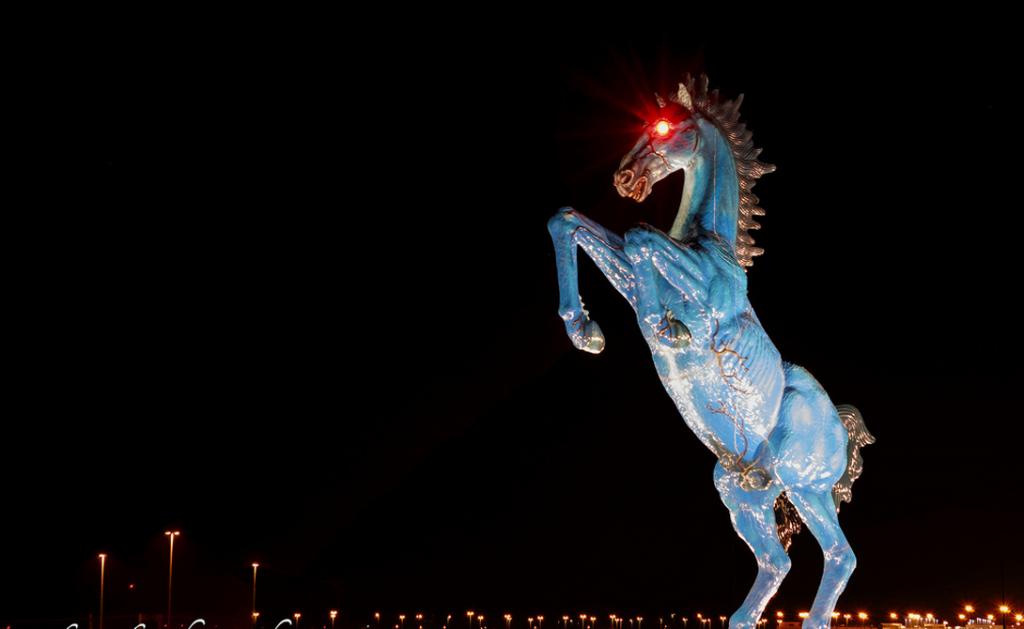 The Blue Mustang is terrible, and this is compounded by its location – near Denver airport. In fact, Blue Mustang is not the real name of the statue; it is just one of the few “tender” nicknames that the people of the city have given him. Among them are the “Blue Stallion of Death” and “Satan’s Horse”. The original name of the statue is “Blue Mustang”, but just look at the statue to see where its nicknames came from. Luis Jiménez died during the construction of this terrible monument. In theory, it is a sniffing anatomically correct horse that has risen to its feet. But looking at her burning red eyes, you realize that this is Satan’s horse. 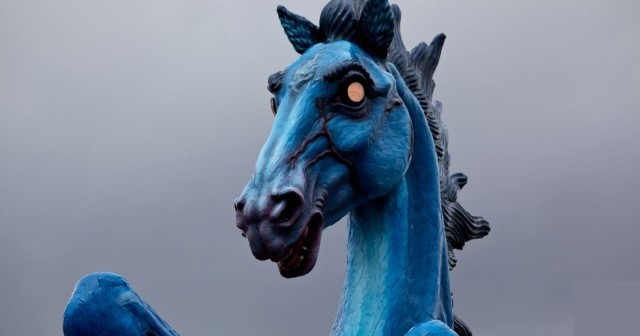 There’ s no doubt a lot of people in Denver don’t like this statue. Even to its creator, it has brought nothing but troubles. Luis Jimenez was working at almost 10 meters above the 4, 100-pound statue when it killed him. A fragment of the statue fell on the sculptor.
Moreover, supporters of conspiracy theories consider this horse a kind of symbol that confirms their theory. They are convinced that Denver International Airport is, in fact, a secret base from which to send a signal for the beginning of social restructuring. When the construction of the airport revealed that the budget had been exceeded and the construction itself had lasted several years longer than planned, rumors emerged that the extra time and money was needed to build a huge underground bunker where the government would hide and from where it would be able to operate after the end of the world. Some now think that the horse is clear proof of this, as it undoubtedly depicts one of the horses of the Apocalypse from the Revelation Book. 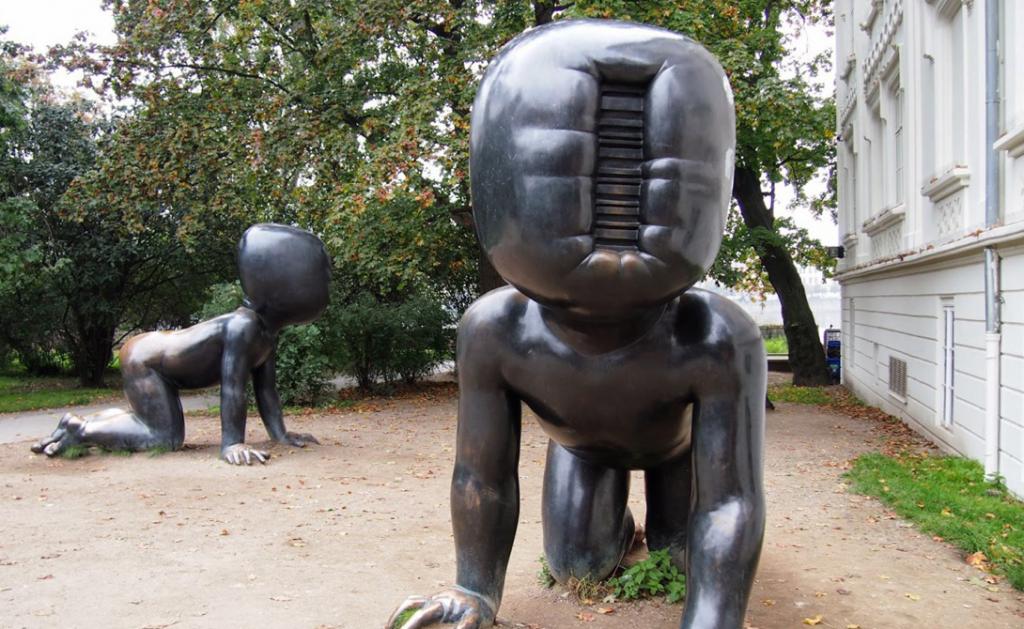 Prague is a strange place. It has the Žižkov TV Tower, a 216-meter high eye nightmare, and the tallest building in the country. It has received many awards as the best building, but it is also the second most ugly building in the Czech Republic. Instead of just accepting the title of “ugly building”, the city tried to make it more attractive. Obviously, in Prague, this means adding something that would make viewers relive the many nightmares. 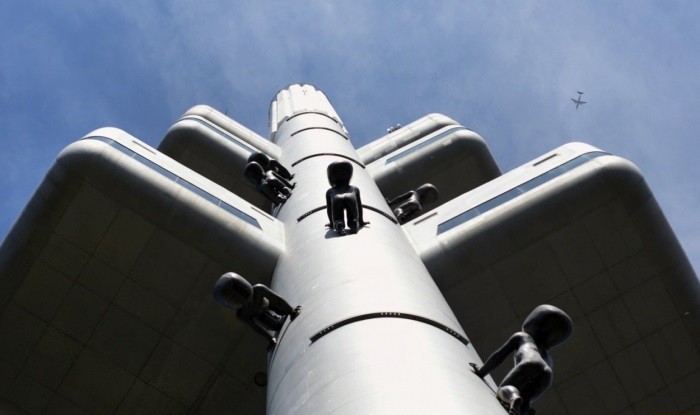 In 2000, 10 giant faceless children crawling up and down the tower appeared in different places. This is the work of one of the most creepy and controversial artists in the city – David Černy. Huge fiberglass babies also appeared in Kampa Park. 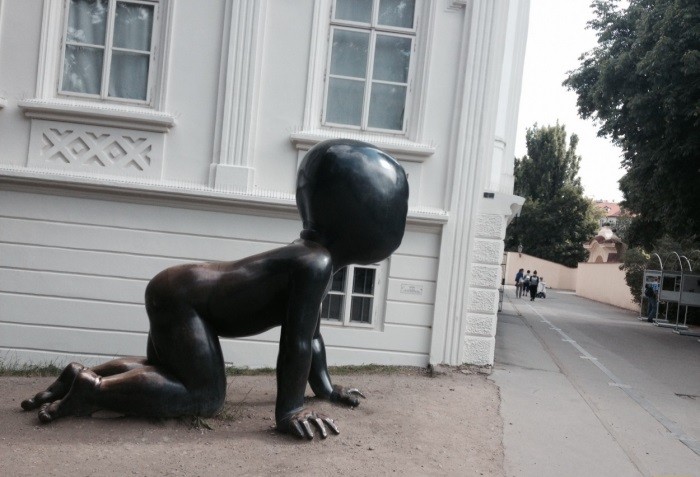 There are three other children in Kampa Park, and they may be even more terrifying (if that’s possible). Visitors to the park can see that these little kids, made of bronze instead of fiberglass, are not completely faceless, although they do have strangely deformed heads. Have their faces disappeared or been sucked in? In fact, we’d rather not know about it. 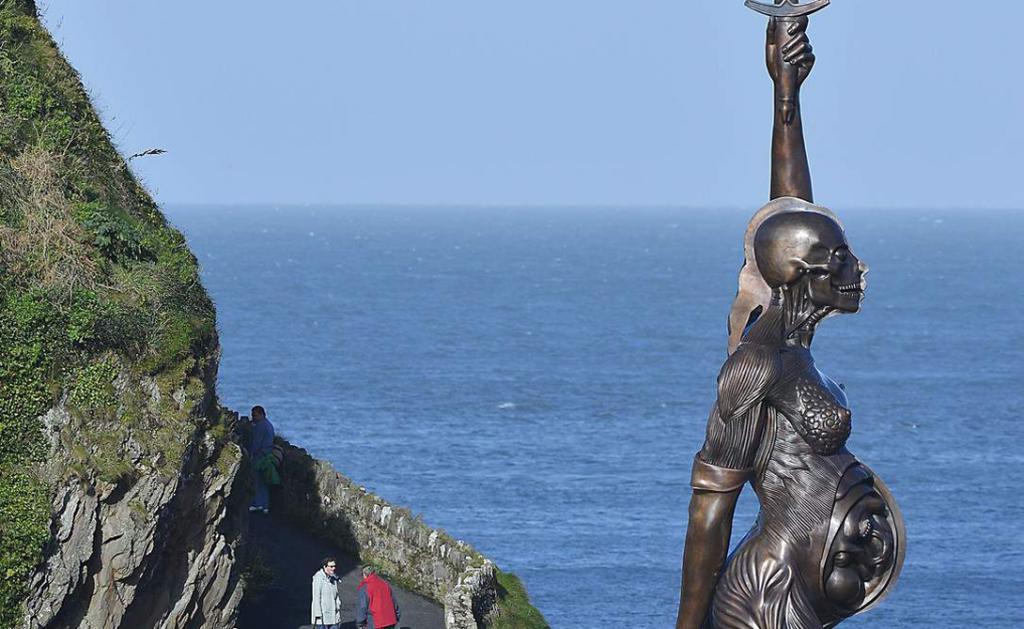 Like many other artists, Damien Hirst is also a rather ambiguous character. But that’s not the only reason he’s argumentative. His ‘modern allegory of truth and justice’ statues leave passers-by with absolutely no choice but to look at them and be terrified. 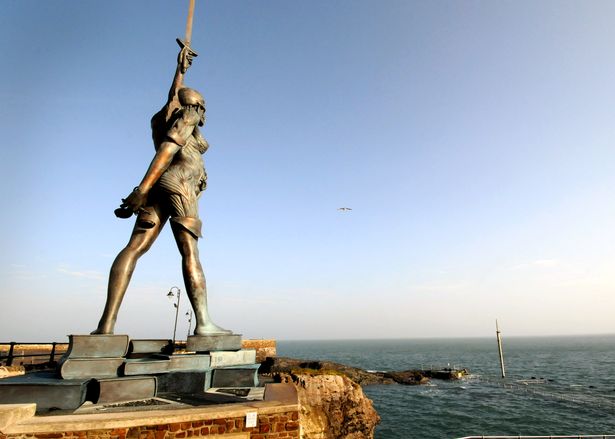 The modern incarnation of the statue of the Goddess of Justice in the interpretation of the dark genius Damien Hirst – the residents of resort Ilfrakombe could not recover from shock for several years after the sculpture was installed. Well, they are quite understandable: a naked pregnant woman with a sword and scales can scare anyone. 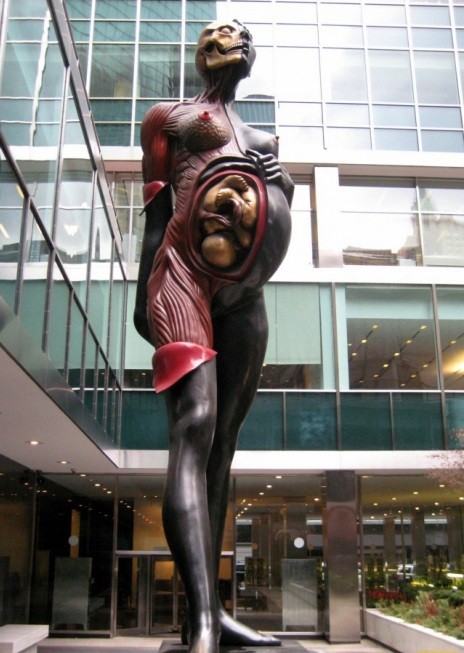 Both the Verity and the Virgin Mother are oversized and both pregnant. This can be claimed because they were partially “skinned” to show off everything inside, from muscle tissue to the unborn fetus. The Virgin Mother is 10 meters high and weighs 13 tonnes. In 2014, she was acquired by a Manhattan real estate magnate whose neighbors soon started a war with him.
And the Verity, made in almost the same style of “pregnant woman with a stripped skin”, even more. She is more than 20 meters tall, holds a sword above her head, and looks at North Devon. According to Hirst, she is on long-term rent, but it is clear that many residents of the English seaside town have some excitement. While some call the statue a great tourist attraction, others think it looks a bit like Hannibal Lector.
The Verity was set at the port on a 20-year rental program. Although it wasn’t made entirely out of the artist’s kindness – Hirst has a house nearby as well as a restaurant overlooking this monstrous statue. Since the installation of the statue, the restaurant has been constantly full of visitors. 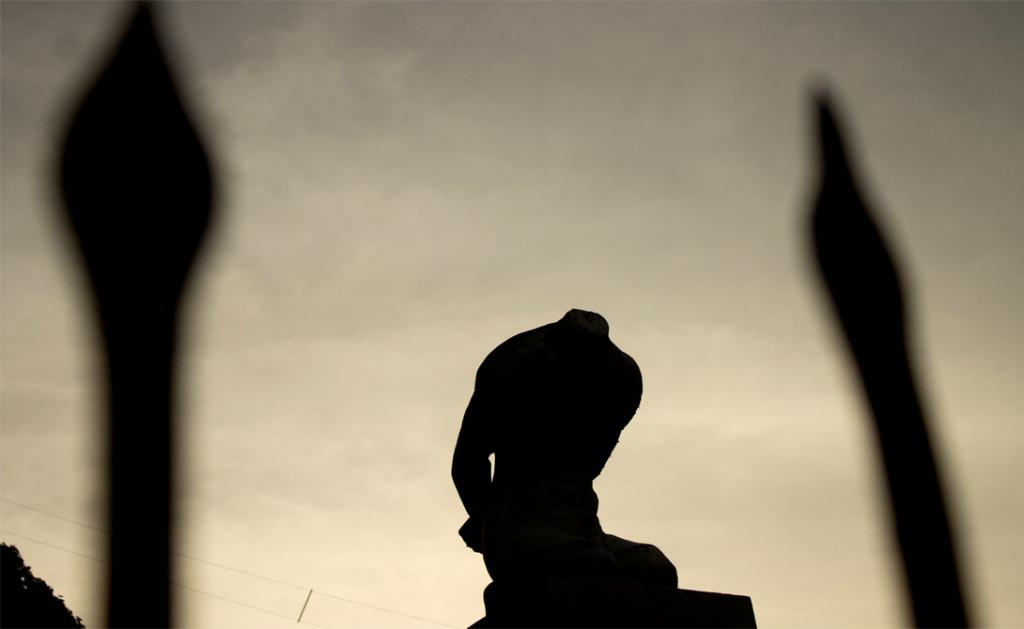 Behind the post office of the city of Legazpi in the Philippines, there is a rather frightening spectacle: a monument in the form of a kneeling headless figure. Her posture suggests that the blade went down just a second ago. There are more questions than answers about the statue.

One of the official versions says that the statue is a memorial to the heroes of the war of the Bicolas, who died during the Second World War. There is another statue (less creepy), which is located in Naga City and commemorates the Bicolas martyrs, whose executions were the impetus for local support for the Philippine revolution. 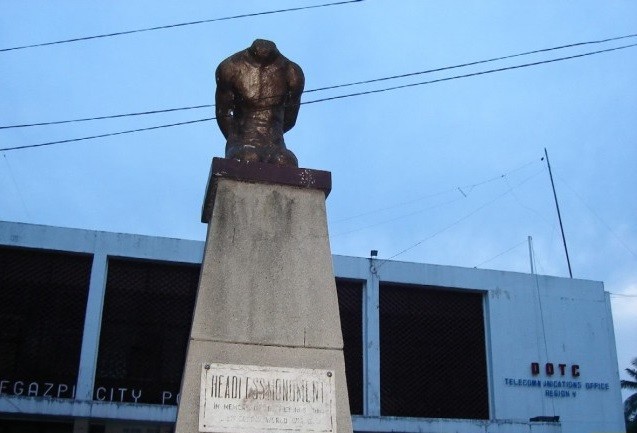 According to local legends, on November 22, 1945, workers discovered a beheaded body buried in the sands of the Bay El Bey in Sabanga. Since his uniform was in almost perfect condition, they thought he had been in the sand for a short time. But the head was never found. The benefactor of one of the colleges in the city wanted to preserve the memory of the man and ordered the construction of a statue, but only after the body was carried through the city during the parade.
We don’t know how true that is. There are no documents left to trace the story of the beheaded body or the order to erect the statue, although quite a few people claim to remember what happened. Local historians have no idea what the real history was, nor does the National Institute of History know.

The Cloak of Conscience 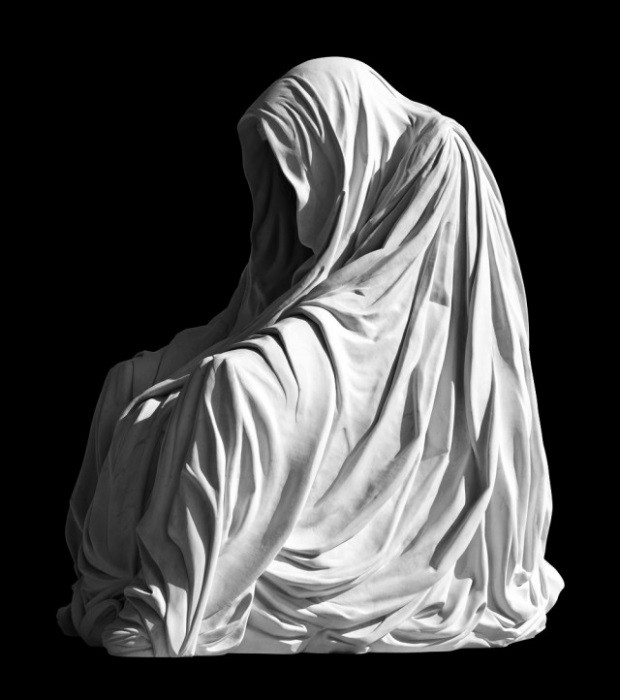 The cloak of conscience is a sculpture that is terrifying, but at the same time strangely beautiful. It has different versions that appear continuously throughout Europe through the work of the artist Anna Chromy.

The figure in the cloak with her eyes down and shoulders down appeared for the first time against the background of a painting she painted in 1980. At that time, it was not even supposed to be an image of a real figure. The figure was empty and showed that there was nothing left of the old woman but rags of the cloak.
This theme reappeared when Anna first turned to sculpture. This time the idea came to life in the form of an empty cloak, which was to symbolize the road we all walk in life – the road that our conscience gives to our image. 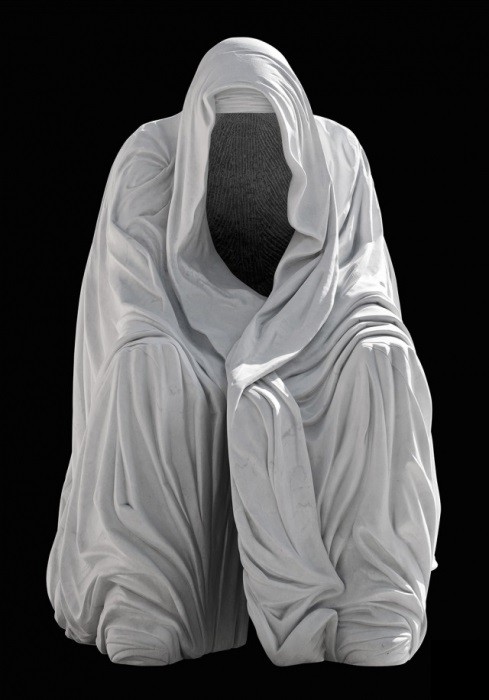 The reaction to the statue was overwhelming and the artist decided to create other versions. She created a small number of sculptures of an empty coat of relatively normal size before creating her main statue.
Even the marble used to create the sculpture has its own story. It was mined from the same quarry from which the marble was supplied for Michelangelo’s work. This quarry is the only one in the world where large enough blocks of marble can still be produced, and the one that Chromy needed for her mysterious and sinister sculpture weighed 200 tonnes. It was so huge that most of the initial work was done in the quarry.
Reduced versions of the Coat were installed in various locations throughout Europe, from Rome to Monaco to Prague.

The statues of Wickham Stone Park 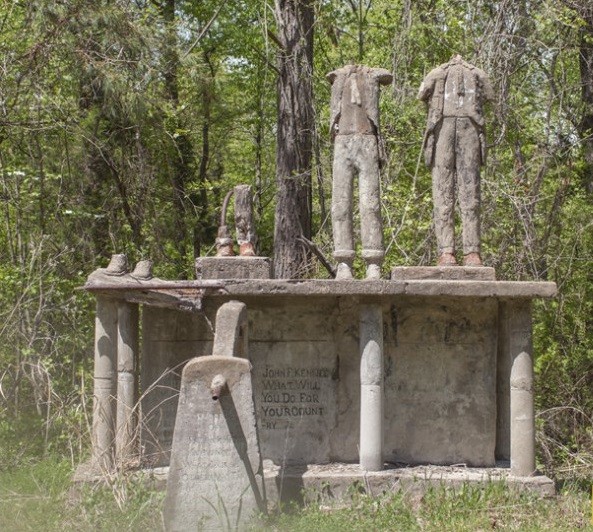 Located along the country road near Palmyra, Tennessee, this park is a creepy collection of statues. They weren’t always so scary, and they were never even supposed to become so.

After the death of their creator Enoch Tanner Wickham, the statues became a victim not only of the weather in Tennessee but also of vandalism. For more than two decades, a tobacco farmer had worked hard to create his statues. When he was retired, he expressed his love for art and sculpture in this way.
He created statues of birds and oxen, several men on horseback, and groups of people. There are also figures of Tecumseh, Andrew Jackson, and Daniel Boone standing next to the bull, as well as a statue of the Sitting Bull. But after Wickham’s death in 1970, bad things started happening to his sculptures, which eventually made them look like something from a horror movie collection in the Deep South. None of them managed to save their heads, and most of them also had no limbs. They have been punctured by bullets, rammed, or hit by trucks, and some have been smashed and dropped from pedestals. These foundations, on which the names of the statues and short poems about their importance to the country were once signed, were also destroyed.
The result is not only creepy, but it is also sad. Attempts were made to save some of these works of art, and some of them were moved to another place and wired to protect against vandals. This is a rather tragic result of the work of a man who was a sculptor only because of his love for the work. 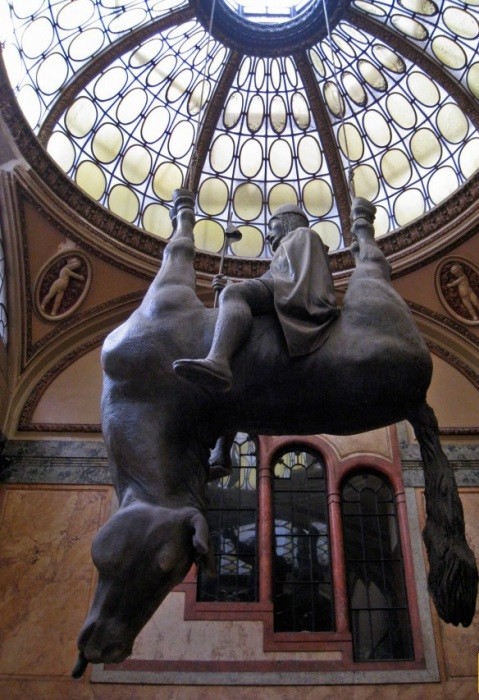 St. Wenceslas created by the same sculptor who created the giant faceless crawling children. For information: St. Wenceslas is the patron saint of the Czech Republic, and his other statue (much more majestic and less terrible) is installed on Wenceslas Square in Prague. And he is sitting there on a perfectly normal horse.

St. Václav David the Black sits not just on a dead horse, but on a horse hanging upside down. She has a dull body, a lifelessly dangling head, and a tongue sticking out.
When the statue was installed at the opposite end of Wenceslas Square, the dead horse was an even more bizarre contrast to the proud figure of the saint who sat on it. The face of this statue of Wenceslas had a striking resemblance to the then President Wenceslas Klaus, and it did not go unnoticed. 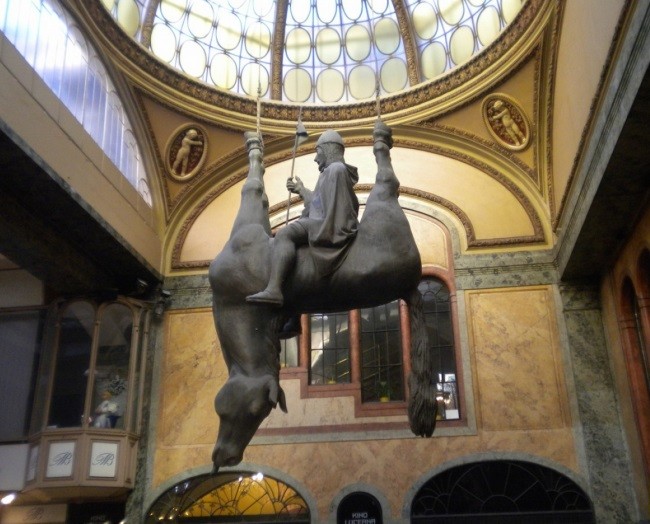 The image of the saint is not just blasphemous. It was interpreted as something absolutely revolutionary. The normal vertical statue of the saint at the other end of the square was for a long time the central place of the city where the inhabitants gathered. It was there that they celebrated victories and gathered in difficult times. The inscription on the monument was a reminder of their strength and a call to fortitude, which makes the statue of another Wenceslas with his creepy dead horse even more disturbing.
There is also an interesting remark about St. Wenceslas in folklore. It is believed that by analogy with the English King Arthur, Wenceslas and his knights simply sleep and wait for the hour when their country needs them, and then they will ride their horses again.